The Kurds have high expectations for Rojava despite challenges. 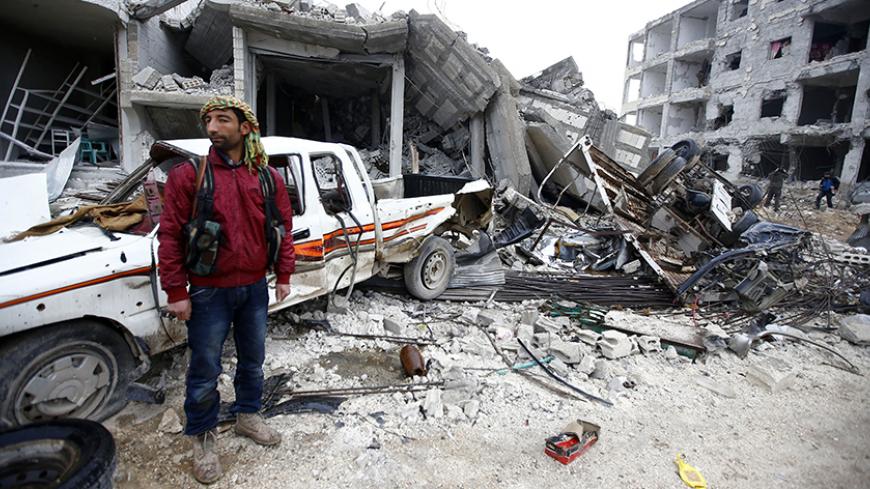 A fighter of the Kurdish People's Protection Units stands next to damaged buildings in Kobani, Syria, Jan. 30, 2015. - REUTERS/Osman Orsal

KOBANI, Syria — I recently stayed overnight in Serekaniye and awoke to unusual sounds at about 5 a.m. I looked out and saw a group of Asayish (local Kurdish police), both men and women, engaged in physical training in an empty lot. Serekaniye had been the scene of clashes in 2012-13 between the Kurds and groups supported by Turkey. Now, the Asayish there look like a disciplined army.

Not quite 200 miles away in Kobani, there is other evidence that the Kurds have serious aspirations for Rojava, officially the Democratic Federal System of Northern Syria. Though rubble remains in most parts, the city is both rebuilding and launching new construction. There is even a new cemetery, which could be seen as a sign of intended stability.

The Syrian side of the border crossing where Turkish and Kurdistan flags flutter is heavily damaged. Streets are named after the Kurdish losses of the war. Destroyed armored vehicles buried under the rubble, damaged tanks, mortar tubes and rocket remnants create the scene of a war museum. Two tanks sit in the city square of Kobani as if they were part of a monument saluting the Kobani resistance.

The Islamic State (IS) was obsessed with Kobani. Omar Alloush, a foreign relations official with the Movement for a Democratic Society (Tev-Dem), the Rojava governing coalition, explained why with an interesting anecdote I had not heard before.

“When IS laid siege to Kobani, it cut off our water and electricity connections. They invited us to a meeting. We met in a village between Kobani and Raqqa in May 2014, before their assault on Kobani. The IS representative began his speech by saying, 'I bring you greetings from [IS leader] Abu Bakr al-Baghdadi. Kurds are our friends. We have many Kurds in our ranks. We want you to declare an Islamic Kurdish state. The entire Islamic world will applaud you. If each Muslim pays $5 for this new state, it will accumulate $5 billion. You are the grandchildren of Salahuddin Ayyubi. Just like he liberated Jerusalem, you can also make all the states in the Middle East, especially north Kurdistan and Turkey, revert to Islam.'"

Alloush continued, "I asked the IS representative whether [Turkish President Recep Tayyip] Erdogan was their friend or if they were against him. His response was, 'You don’t understand politics. Erdogan is an infidel. Now we appear to be supporting him because our interests dictate so. Erdogan is a friend of Jews.' I ended the discussion there by saying we had no intention or project to set up an Islamic state."

Kobani did not fall as Erdogan had gleefully announced, but it was razed. Now it is facing major impediments in its recovery process, such as an embargo, a blockade and the clashes in the regions of Manbij and al-Bab. Khaled Mahmoud, the co-minister of finance of Rojava's Jazeera canton, explained the situation.

“We are under siege from four directions. The border is closed; we can't carry out normal trading. After we liberated Serekaniye and Tell Abyad, Turkey closed the border crossings to those towns. We have problems importing badly needed cement, iron, medicine, baby food and technology. In July, they [Kurdistan Regional Government (KRG) in northern Iraq] wanted to sell us products such as soft drinks, water and ceramics that we don’t need in return for wheat, cotton and lentils from us. But we are in the process of stocking strategic products that our people may need. We couldn’t sell them."

He continued, "[The KRG] wanted to buy sacrificial animals from the Idlib area. We allowed that with light taxes. They limit the sale of sugar from the KRG to Rojava. They don’t allow the sale of generators above 10 amperes. Because of the KRG embargo, goods are smuggled from Iraq and Turkey, therefore at higher prices. Turkey has closed its crossings for three years. Instead we trade with other parts of Syria, usually via Raqqa.”

Complaining about the restrictions by the Syrian regime, Mahmoud added, “The regime doesn’t allow importing everything by air. We wanted to import printing presses for our school books; they refused. Traders brought them by land, but at a much higher price. They don’t allow the import of medical technology, forcing people to go to Damascus for treatment. That is what the government wants. We have 1,200 oil wells, but only 300 of them operate. That is for our use. We have no refinery to process anything more.”

Nevertheless, Mahmoud was still optimistic, saying, “We are not desperate despite the embargo and blockade. We have wheat, cotton, oil and water. We sell fuel at low prices to the people. We pay salaries to 35,000 people apart from the YPG [People's Protection Units]. We have electricity problems but still we are better than other parts of Syria. We supply electricity 12-13 hours a day to homes. At the moment, Turks have cut the water to Tishrin Dam. We can’t therefore generate electricity there. Once we do that, all our power problems will be over.”

Remnants of a tomb

Tell Abyad, east of Kobani, and Manbij, west of the Euphrates River, are where a Kurdish, Arab and Turkmen partnership is being tested on the ground after IS' expulsion. Before going west of the Euphrates from Kobani, I visited the Tomb of Suleiman Shah, which is now totally destroyed. The Turkish army, under orders of the government, evacuated the tomb with the help of the YPG and removed the sarcophagus. Soldiers then blew up the tomb and the adjacent quarters used by Turkish guards. This was presented to the Turkish public as a victory. What is left behind is rubble, torn sandbags, shattered marble pieces and sagging palm trees.

Trees on the slope opposite the Euphrates River are pruned to read “Allah” in Arabic. Once you cross to the west of the Euphrates, you see a series of parked trucks that gives you a good idea of the importance of that junction. Trucks and tankers coming from Deir ez-Zor and Raqqa headed for Aleppo and the Turkish border take breaks here. The enormous number of trucks shows the dimensions of commerce in IS-controlled areas.

The population of Manbij and its adjacent villages exceeds 500,000. I didn't see the YPG and Women's Protection Units (YPJ) militants in Manbij, where there are checkpoints. The streets were lively and the town, which is administered by the Manbij Popular Assembly and Manbij Military Council, was calm. Kurds are certainly working discreetly to dominate the town, but they do not move around, so as not to antagonize the Arabs. For the Kurds, the only handicap here is not the majority Arab-Turkmen demography. As with al-Bab, local conservatives are also strong here. Jarablus and al-Rai, now controlled by the Turkish army, are like minor villages compared with Manbij.

All is well in Tell Abyad

I asked Alloush, the Tev-Dem official, how life was in Tell Abyad. He said people who had left the region have returned, apart from some families that were affiliated with IS and had forced the Kurds to leave in 2013. Arabs and Turkmens joined the administration. “Those who did not return were the ones who had joined [IS] and committed massacres. If we had wanted to destroy villages, we would have destroyed Quneitra, where a family that killed Kurds still lives. Not even a window pane was broken in that village. People who lost their homes in the villages in air attacks now live in tents we provided.

"When we liberated Tell Abyad on June 18, 2015, the town was practically empty. People were massed at the border without passing into Turkey. We asked them to return to their homes. Some did. When they saw that we were helping them, they told reluctant people to also return. It took them a while to be confident enough to open their shops, but then life began to normalize. Tribal notables contacted us and we set up the first council, [consisting] of five opinion leaders, on July 15, 2015, followed by the Democratic Autonomy Assembly. We established 11 committees to deal with health, education, the economy and local administration."

Alloush said there are Kurds, Arabs and Turkmens in each committee. Since there weren't a lot of Turkmens, he added, "We even provided them with housing in the town so that they will be residents of Tell Abyad. Unfortunately, many Turkmens cooperate with [IS]. But if their close relatives were not involved with [IS], we welcomed them to our administration. We wanted to teach Turkish to Turkmen children but couldn’t find teachers. We couldn’t even find someone to write a Turkish signboard for the Suluk municipality.”

A saga is being written in Rojava; one side has high hopes for the future and the other side feels threatened by those aspirations. It is a situation worth following.