The Islamic State is attacking Kobani canton, or Ain al-Arab, in an attempt to encircle the Kurdish autonomous region in Syria and capture a third crossing to Turkey. 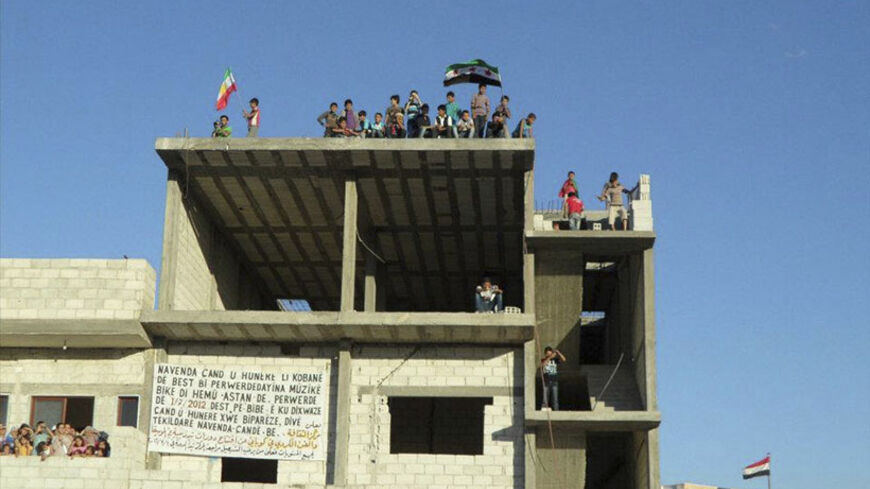 Youths wave Kurdish and Syrian opposition flags from the top of a building in Kobani, July 3, 2012. - REUTERS/Shaam News Network

Journalist Barzan Iso, who a couple of days ago was gleefully telling me about a recent success of the Kurdish People's Protection Units (YPG), the militia of the Kurdish-controlled the Rojava region of West Kurdistan, was distraught when I called him the next day. He was at the funeral of his cousin. He told me on the night of July 8 that the Islamic State (IS, formerly ISIS, or the Islamic State of Iraq and al-Sham) had begun a major attack against Kobani, also known as Ain al-Arab, and his cousin was among 10 Kurds who were killed.

The Islamic State, after moving heavy weapons it took from the Iraqi army to Syria’s Deir ez-Zor and Raqqa towns, has been mounting three-pronged attacks since July 2 against Kobani, one of the three cantons of Rojava. IS had been expected to move toward Baghdad, backed by Sunni tribes, Baathists and Salafist Islamic factions, but diverted its operations to Syria. IS easily captured Mayadeen, Muhassen and Al Omar oil basin at Deir ez-Zor and its next target was predicted to be the Kurdish Jazeera canton. But IS struck at Rojava’s most symbolic target, Kobani.

Kobani is an easier target because IS has the Kurdish region under siege from three sides: Raqqa to its south, Tel Abyad to the east and Carablus to its west are already under IS control. IS first occupied Raqqa with its 200,000 population and established its emirate before expanding toward the Turkish border in the north and along the Euphrates river. With that front secure, it wasn’t hard for IS to seize the oil basins in Deir ez-Zor and open a logistics link to Iraq.

According what Idriss Nassan, the deputy foreign relations minister of the Kobani canton, told Al-Monitor, this is how the offensive against Kobani developed: IS began its offensive by first capturing the villages of Zor Mughar, Beyadi and Ziyarete, 40-45 kilometers (25-28 miles) west of Kobani. The YPG pushed IS out of these villages after hard-fought battles. IS left behind more than 100 dead, a Humvee, a tank, some Doushka heavy machine guns and automatic weapons. YPG lost 16 of its fighters.

On July 7, the IS target was the Kun Eftar village, slightly north of the Turkish sovereign territory of the Tomb of Suleiman Shah. Here YPG lost two fighters but IS lost 20 to 30. IS could not achieve its goals. Next came attacks from Tel Abyad in the east. On July 8, IS attacked Evdiko village 8 kilometers (5 miles) west of Tel Abyad. In that clash, six YPG fighters and civilians were killed. Another IS target was Abu Surra village, 60 kilometers (37 miles) south of Tel Abyad. There, IS blew up a bomb-laden truck at a YPG checkpoint, killing four YPG fighters.

Everyone was curious how Kobani resisted the IS offensive supported by 10 tanks and heavy weapons. No doubt, in addition to all the people of Kobani who took up arms to support the YPG defenses, Kurds from elsewhere have also mobilized to defend the region.

Kobani has a symbolic significance for the Kurds of Rojava as the starting point of their autonomy movement. Two main Kurdish movements, the Kurdistan Workers Party (PKK) and the Kurdistan Communities Union (KCK), have declared mobilization for Kobani. Asked how many PKK militants have come to Kobani, Nassan said: “There are people from the PKK ranks coming to help in Kobani, but these are children of Kobani. They are defending their own land. Mobilization goes beyond the PKK. We have Kurds coming from Turkey, Iran, Iraq and different parts of Syria to defend Kobani. Some of them have become martyrs.”

Journalist Amed Dicle of the Kurdish news agency ANF recalled to Al-Monitor that the PKK leader Abdullah Ocalan had first stopped over at Kobani after he had to leave Turkey and had built close bonds between the PKK and the people of the region. “Ocalan in July 1979 came to Kobani from Turkey and stayed 40 days. He opened up to the Middle East with contacts he made from there but his relations with Kobani never ceased. Thousands of youth from Kobani joined the PKK and many died in different parts of Kurdistan. The first Rojava guerrilla of the PKK to get killed was from Kobani. Also the Rojava revolution started on July 19, 2012, at Kobani.”

Allegations of logistical support from Turkey

Although their morale appears to be high, no doubt the Kurds are under heavy pressure this time. Kurds say IS continues to have access to the Turkish border and its heavy weapons make it tough for them to defend themselves. Nassan said IS was using the Tel Abyad crossing (facing Turkey’s Akcakale) and Carablus crossing (facing Karkamis) to move supplies and militants. Nassan said: “Tel Abyad and Carablus are officially closed but they are still used to cross to IS controlled areas. Moreover at Rai, 40 kilometers (25 miles) west of Kobani, illegal crossings are allowed.”

Iso’s report tends to confirm Nassan’s allegations: “Although it is said that the Turkish border is closed, support to IS-controlled areas through the border continues. A short time ago a Qatari charity sent a substantial amount of assistance to Carablus, which is under IS control. Also, as the electricity power station in the region is not operating anymore, the power to the hospital, municipality and the cultural center that houses the IS staff is supplied from Turkey.”

Why is Kobani so important?

Many wonder why IS attacks Kobani so repeatedly. IS sees Rojava within the boundaries of the caliphate it declared. It even announced that Kobani, whose name was changed by the Baathist regime to Ain al-Arab as part of its Arabization policy, would henceforth be known as “Ain al-Islam.”

So why has Kobani become an obsession with the IS?

Should Kobani fall, than the Jazeera canton in the east and Afrin in the west will be easier targets. Afrin, which abuts the Turkish border in the north and west, has Arabs and Turkmens to the east and south, where the Islamic Front is at war with IS for the terrain. Some of the villages between Afrin and Carablus are in the hands of IS and others in the hands of the Islamic Front. To move toward Afrin, IS will have overcome Islamic Front units such as the Tewhid Brigade. The opposition forces in this region will not submit to IS as easily those at Deir ez-Zor did. If the Rojava line collapses, IS will be adding another 400-450 kilometers (250-280 miles) to the area it controls along the Turkish border.

This certainly must be major cause of concern for Turkey. Or is it? I am afraid not.