A joint statement by Russian President Vladimir Putin and US President Donald Trump that there is no military solution in Syria infuriated Turkish President Recep Tayyip Erdogan. 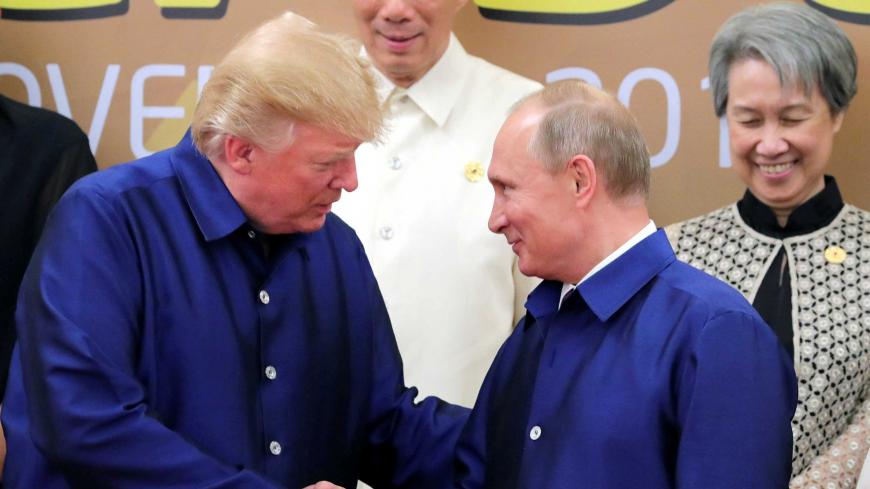 US President Donald Trump and Russian President Vladimir Putin shake hands as they take part in a family photo at the APEC summit in Danang, Vietnam, Nov. 10, 2017. - Sputnik/Mikhail Klimentyev/Kremlin via REUTERS

The Nov. 11 joint statement by Vladimir Putin and Donald Trump that there can be no military solution in Syria and that all parties should participate in Geneva talks has unnerved Turkish President Recep Tayyip Erdogan.

Erdogan expressed indignation about the US-Russia statement on the eve of his Nov. 14 meeting with Putin and said, “If there can be no military solution, then they should withdraw their soldiers. The world is not stupid. The central government killed nearly 1 million people. Turkey doesn’t have soldiers there. Let them withdraw their soldiers and look for political solutions. The US has five air bases in northern Syria. They are preparing one at Raqqa. They also have eight military bases — that makes 13. Russia has five bases. What about these facts?”

Erdogan traveled in this angry mood to Sochi on Nov. 13 to meet with Putin. In the joint press conference after their meeting, two leaders said progress has been made in de-confliction zones, as agreed to at Astana. But Erdogan was more conciliatory this time. “A basis has been laid that will allow us to focus on a political solution. We pay attention to the declaration made made in Vietnam by Putin and Trump.”

That Erdogan and Putin had not reached an agreement was clear from a statement of Kremlin spokesman Dmitry Peskov, who said, “Issues discussed by the two leaders are very complex and will not be revealed.”

Ankara and Moscow have three key issues they cannot agree on about the Kurdish question.

Ankara is disturbed by Russia's refusal to acknowledge Turkish requests despite all the cooperation Turkey has displayed at Astana. Contacts between Russians and the Kurds have revealed that Russia has not given the green light for an operation at Afrin. While Erdogan was at Sochi, Ziyad Sabsabi, deputy chair of the Russian senate's foreign relations committee, was in Qamishli, a major Kurdish town in Syria, to receive families of Russian fighters who had joined the Islamic State. “Russia has never had a negative attitude toward the Kurds. We have always agreed with their demands for the recognition of their legitimate rights. We will continue to do so,” he said.

The Aleppo-born Sabsabi said Russia has worked hard for the Kurds to participate in all meetings, including in Geneva and Astana. Asked about Russia’s reaction to possible attacks by the Syrian army and Iranian-linked groups on Kurdish YPG and Syrian Democratic Forces, Sabsabi said: “Russia will not be a part of any clashes between the regime forces and SDF, but will play a reconciliatory role.”

It wasn’t hard to see why Erdogan was disappointed and upset.

Abdulkarim Omar, the chairman of the Jazeera canton foreign relations committee who hosted Sabsabi in Qamishli, told Al-Monitor that Russia insists on Kurdish participation in the political solution process. Omar said representatives of Kurds, Syriacs, Asharis, Armenians, Chechens and Turkmens will all participate in the Syrian People’s Congress Russia is planning.

Omar said there is nothing new in the negotiations with the Damascus regime: “Last year at the Khmeimim meeting under Russian mediation, we discussed the future of Syria, Kurdish rights and the status of the Northern Syrian Democratic Federation. But the regime is not prepared to negotiate a political settlement. There are no new contacts with the regime.”

Omar said the situation in Afrin, where Turkey wants to be more involved, “is complicated. But we believe Russia, Iran, the US and other regional and international players will oppose such an operation.”

A PYD official in charge of civilian administration affairs at Raqqa told Al-Monitor his views about what is going on with Russia and Turkey. He said the People’s Congress was to have been held at Sochi on Nov. 18 but that Turkish objections to the Kurds' presence blocked it. He said, “To soften the Turkish objection, Russia renamed the meeting the ‘National Dialogue Conference of Syria.’ There could be other similar attempts to find a solution. We think Turkey may withdraw its objection. We are going to send 100 names from Raqqa, Tabqa, Manbij and other locations [to Sochi]. They won’t only be Kurds” but will represent all ethnic groups in the area.

Omar said Russia insists on convening the People’s Congress because it wants to spread the following message: “We succeeded in Syria. We put together the political basis for a solution.” He said the United States is not opposing the proposed Congress. He said Russia has told the Kurds that when they come to Sochi, they should not refer to a Northern Syrian Democratic Federation. “They should simply mention the contents of the project without mentioning names. This is not a bargaining point between Kurds and Russia but a Russian move to minimize possible objections. Russians seem to favor a model like Tatarstan in the Russian Federation while the Syrian regime may agree to a cantonal system such as in Afrin, Kobani and Jazeera,” he added.

Omar said the Putin-Trump statement is a positive development as the regime has stepped up its threats against the Kurds after the liberation of Raqqa. He said an accord that rules out a military solution will discourage operations against areas controlled by the SDF. “Anyway, the Americans are saying, ‘We are here. Don’t you dare attack us.’ The international coalition will continue to remain on the ground until a political settlement is reached. This is an assurance for the Kurds. Finally, Russians are telling the Kurds that they won’t allow Turkey to attack Afrin.”

All these contacts, negotiations, background dialogues and the field situation tell us that Turkey is still not in a position to achieve its ends despite its success with Operation Euphrates Shield. Further progress in US-Russian agreement despite Turkey’s objections may well open the way for there to be a settlement on the Kurdish issue without bloodshed.