Turkish army chief in Sochi as 'mission impossible' kicks off 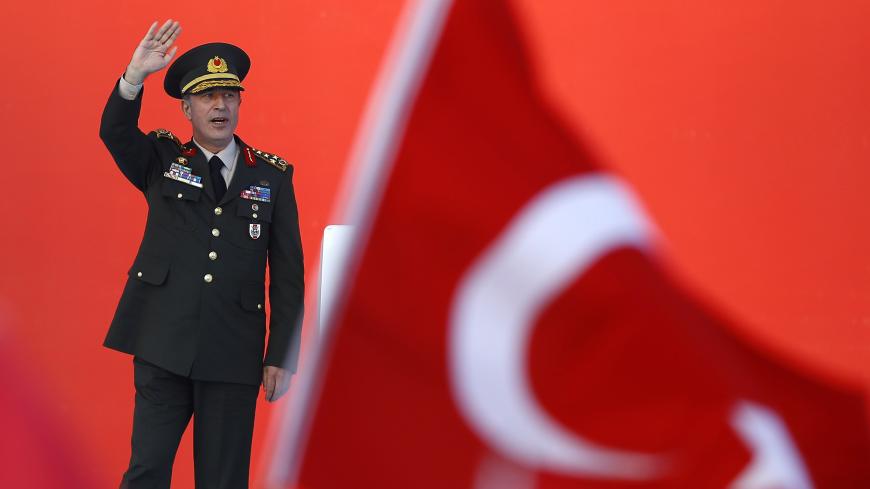 Turkey’s Chief of Staff Hulusi Akar met with his Iranian and Russian counterparts in Russia’s Black Sea resort of Sochi Nov. 21 to lay the groundwork for a critical summit to be held Nov. 22 between leaders of all three nations, where they will thrash out what many observers label “mission impossible” — a political settlement to Syria’s six-year-long civil conflict. The summit will coincide with a separate gathering in Riyadh of tens of groups opposed to the regime of Syrian President Bashar al-Assad. It is meant to achieve a similarly gargantuan task — to agree on a common position before United Nations peace talks resume in Geneva on Nov. 28.

The dizzying diplomacy took a further unexpected turn when Assad arrived in Sochi Nov. 21 to meet with Russian President Vladimir Putin. Photos of the two men embracing sent a strong signal to other stakeholders ahead of the talks that Assad is not going away anytime soon and certainly not under Russian pressure.

Akar and his fellow generals were expected to focus mainly on the four de-escalation zones in Syria, where a pause in fighting and in airstrikes is meant to allow civilians to return and for a modicum of peace to gel paving the way for future talks between the regime and its opponents. The accord reached in May in the Kazakh capital, Astana, has been hanging by a thread with repeated violations notably by government forces.

The province of Idlib on the Turkish border where the al-Qaeda linked Hayat Tahrir al-Sham (HTS) continues to hold sway remains the most critical piece of the deal, as it is these militants who pose the biggest threat to the regime, and many European and US officials would argue, eventually to the West.

But Turkey’s biggest bugbear remains the Syrian Kurdish People’s Protection Units (YPG) and its political wing known as the Democratic Unity Party (PYD). Both are tightly intertwined with the Kurdistan Workers Party (PKK), which has been waging a bloody campaign for Kurdish self-rule inside Turkey since 1984. Turkey is therefore incensed at the US-led coalition’s alliance with YPG “terrorists,” saying the training and weapons provided by the Pentagon benefits the PKK.

Officials with close knowledge of the Syria peace talks said Turkey has succeeded once again in getting the PYD struck off the list of participants in Geneva. Moscow earlier postponed a Syrian National Dialogue Congress in Sochi after Turkey objected to the PYD’s planned presence there.

Russia’s efforts to manage relations with the Syrian Kurds without alienating Turkey mirrors Washington’s efforts to keep both the YPG and Turkey on board in the fight against the Islamic State (IS). But the forces arrayed against the Syrian Kurds may prove too great to resist. Turkey, the Assad regime and Iran, which has a large and restive Kurdish minority of its own, are all bent on rolling back Syrian Kurds' gains.

Turkish troops escorted by HTS fighters entered Idlib last month in order to monitor the cease-fire lines but above all to hem in Afrin, the Syrian Kurdish enclave abutting Idlib, which Turkey is repeatedly threatening to attack.

Turkish President Recep Tayyip Erdogan upped the ante last week declaring, “We need to cleanse Afrin of the structure there called the YPG. We need to be dominant at observation points in Idlib.” His comments came as Turkish drones flew spying missions above the enclave. The YPG has vowed to resist any Turkish action and took to Twitter with videos of long columns of tanks and other armored vehicles manned by male and female fighters to boast its force. But amid all the bravado, Syrian Kurdish officials acknowledge unease. A commander in the YPG-led Syrian Democratic Forces (SDF) contacted via WhatsApp told Al-Monitor, “Afrin is sitting on a thorn. The outcome of the Sochi summit may determine its fate.”

Nikolaos van Dam is a former Dutch ambassador to Turkey and the author of the recently published book “Destroying a Nation: The Civil War in Syria.” He told Al-Monitor, “Turkey is bound to oppose any YPG/PYD representation in Geneva — as well as any YPG/PYD domination in its border area — that may affect the position of the Kurds within Turkey itself because of the strong links between the YPG/PYD.” Likewise, “Iran will not want to give up its strategic military position particularly after it has made enormous military and economic efforts to save the regime. The countries that intervened in Syria can in the end be expected to give priority to their own strategic interests, irrespective of whether or not this is to the detriment of the Syrian people.”

The YPG currently controls nearly a fifth of the country and more than half of Turkey’s 800-kilometer (497-mile) border with Syria. But whether it can hold on to its gains is a big question and particularly if and when US forces withdraw. The SDF commander aired worries that with IS all but defeated in eastern Syria, regime forces will redeploy to Idlib and concentrate on HTS. “Once HTS is dealt with, the regime may well turn against us to re-establish control over our territories,” he said. “And there are no guarantees that Russia will step in to defend us.” The SDF commander predicted that it was “only a matter of time” before Turkey re-engaged directly with the Assad regime and “combined their forces against the Kurds.”

Van Dam believes that Damascus’ alleged offer to the Kurds to allow them self-rule in Syria in exchange for the YPG withdrawing its forces from majority Arab areas may indeed be a ruse. “I would expect the regime to have made this offer in order to neutralize the YPG/PYD militarily, with the aim of retaking control of the area in a later stage.” He agrees that Turkey and the regime “will have a common interest in preventing a kind of federalist area in northern Syria and this in turn will provide a motive for the Turkish government to re-establish cooperation with the Damascus regime.” Turkish cooperation in helping eliminate the HTS threat can ease the path for reconciliation.

The Kurds' sole guarantee against regime and Turkish aggression remains the United States, at least for now.

Many heaved sighs of relief when US Secretary of Defense James Mattis recently signaled that US Special Operations Forces would stay on “to prevent the return of [IS] 2.0” and oversee the implementation of a negotiated settlement. But administration sources speaking on condition of anonymity told Al-Monitor that current thinking was that the US presence in Syria would likely not extend beyond the end of 2019, unless assorted administration hawks prevail and seek to repurpose the YPG as an anti-Iran force of some kind. But the SDF commander said the YPG had no intention of allowing itself to be dragged into what he called “such reckless adventures,” and least of all when the United States continued to balk at engaging diplomatically with the Syrian Kurds.

In any case, Turkish claims about the threat the YPG poses may be overblown. Michael Stephens, who runs the Qatar division of the London-based Royal United Services Institute, told Al-Monitor that while “training [given by US Special Forces in Syria to the YPG] may improve the overall ability of the PKK to fight in urban environments, the overall effect will not be overly significant. The main areas of operation for the PKK are vastly different from those of the YPG. Mountain fighting and guerrilla warfare that are the hallmarks of the PKK will not be [impacted].”

Besides, as Stephens pointed out, despite all the recent turbulence between the two NATO allies, Washington has upgraded its counterterrorism cooperation with Turkey “and is taking on some of the burden sharing of dealing with PKK activity inside Turkey, which to some extent negates the improvements made in YPG training and equipment.” Washington’s response to any Turkish moves on Afrin will be a further bellwether of the extent of its commitment to the Syrian Kurds. “We don’t expect much from the Americans in Afrin,” the SDF commander said. “We rely on our own strength.”