The Turkish president has renewed threats to move against Syrian Kurdish forces, playing to his nationalist base with promises to secure Turkey's borders, but is unlikely to take action yet for fear of Russian retaliation. 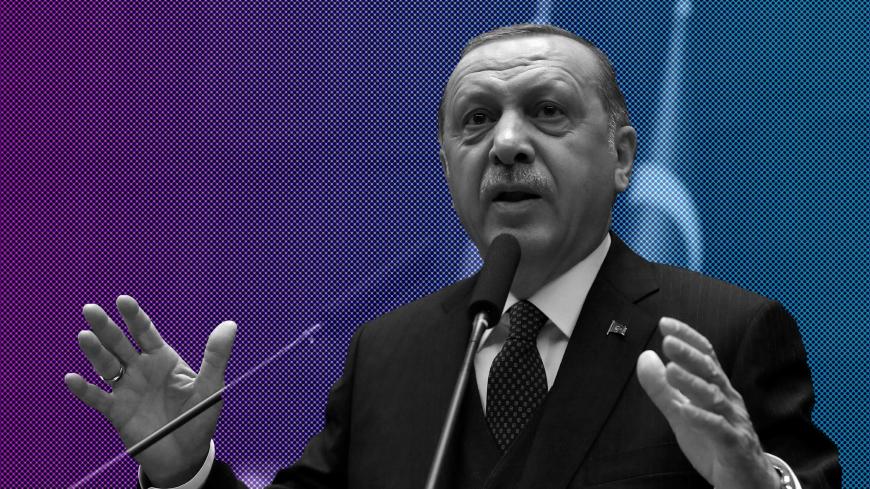 Turkish President Recep Tayyip Erdogan addresses members of parliament from his ruling party during a meeting at the Turkish parliament in Ankara, Turkey, Jan. 9, 2018. - REUTERS/Umit Bektas

Speaking to his Justice and Development Party (AKP) lawmakers, Erdogan vowed, "We will complete this process by securing all our borders."

Erdogan was referring to the Syrian Kurdish People’s Protection Units (YPG), which backed by the US-led coalition has wrested control of more than half of Turkey’s 900-kilometer (560-mile) border with Syria.

Turkey has repeatedly threatened to move against the YPG, particularly in Afrin. The Kurds want to link this enclave to the rest of their territory lying east of the city of Manbij and stretching all the way to the Iraqi border, thereby establishing an uninterrupted dominion of YPG control. Mindful of Russian retaliation, Turkey has thus far refrained from doing so, allowing Russian-backed Syrian regime forces to nibble at YPG-run areas instead.

But Russia’s overtures to the Kurds, most recently decorating one of its commanders at a ceremony in Moscow, and on-and-off invitations to the YPG’s political arm, the Democratic Union Party (PYD), to a planned Syrian National Dialogue Congress in Russia’s Black Sea resort of Sochi seem to be testing Ankara’s patience.

The YPG is closely intertwined with the Kurdistan Workers Party (PKK). Since 1984, the PKK has been waging a bloody campaign for self-rule inside Turkey and wields considerable influence over PYD and YPG affairs in Syria. Yet, Russia and the US-led coalition against the Islamic State continue to ignore Turkey’s demands they sever ties with YPG “terrorists.”

Erdogan’s outburst may well be a signal of his displeasure to Moscow, but his target audience is just as much domestic. It's a clear message to Devlet Bahceli, the leader of the far-right Nationalist Action Party who yesterday pledged to support Erdogan’s candidacy in the critical presidential elections due to be held in November 2019.

The AKP will not stray from its hard-line policies on the Kurds, either at home or across its borders.

Still, Serhat Erkmen, a Turkish academic who follows the Syrian conflict, believes that one cannot rule out Turkish intervention against either Afrin or Manbij, because Turkey truly does view the YPG’s ambitions as a challenge to its own security. He told the independent online portal Medyascope, “Suddenly, when we least expect it, conflict could erupt” in Afrin.

A commander with the YPG-led Syrian Democratic Forces agreed that Turkey's threats ought not be dismissed lightly. He told Al-Monitor via WhatsApp that there were reports that some Hayat Tahrir al-Sham (HTS) fighters from Idlib had defected to Free Syrian Army forces in Turkish-controlled Jarablus. "Their real purpose, we believe, is to take part in a planned attack on Manbij and Afrin," he said. The claims could not be independently verified.

Erdogan’s allusions to Manbij, an Arab-majority town where the YPG maintains a presence despite US pledges to Ankara they would withdraw, was a clear dig at the United States. Erkmen noted Erdogan’s message was that Turkey “is an actor who continues to call the shots” in Syria.

Most Western analysts argue the opposite, saying that ever since Russia’s full involvement in the conflict and that of the United States alongside the YPG, Turkey’s hands remain tied and its rebel proxies hugely weakened. Once Syrian government forces conclude their ongoing campaign to wrest Idlib from al-Qaeda-linked HTS, Ankara will face pressure to withdraw from the pocket of territory it controls in northern Syria.

Umit Kivanc, a seasoned Turkish pundit and filmmaker, points out, however, that Turkey is digging into the so-called Euphrates Shield zone, building schools, hospitals and training local police. “It's even set up a Turkish-style post office. Once the Turks move in somewhere, it's hard to get them out,” he told Al-Monitor in an interview.

Kivanc also expressed skepticism at the notion — one Russia apparently believes — that with Turkey’s backing, “armed jihadis” could be co-opted into any peace arrangement allowing Syrian President Bashar al-Assad to remain in power. “What kind of a fantasy is that?” Kivanc asked. “Nobody knows the answer.”

Since 2015, Turkey’s priority in Syria has shifted from regime change to checking rising Kurdish influence. It's had a game-changing effect on the conflict, tipping the balance in favor of the regime and paving the way for the fall of Aleppo. But Turkey’s expectations that in return Russia would grant it greater berth against the YPG are clearly waning. And in Turkish eyes, Moscow’s dalliances with so-called moderate rebels backed by Turkey are beginning to look more like a ruse to buy the regime time to defeat HTS and its other enemies and to reconsolidate its power. The plan would only be palatable if the regime were to point its guns at the Syrian Kurds as well.

Cracks between Turkey and Russia were on display today as Turkish Foreign Minister Mevlut Cavusoglu accused regime forces of “hitting the moderate opposition with the excuse they are fighting Nusra.” He was referring to Jabhat al-Nusra, the jihadi outfit that forms the backbone of HTS. Cavusoglu said the Syrian army’s actions undermined diplomatic efforts for a negotiated solution to the conflict.