Turkish President Recep Tayyip Erdogan and Russian leader Vladimir Putin have reportedly agreed to accelerate Turkey's deployment into Idlib a day after its convoy was struck by a car bomb. 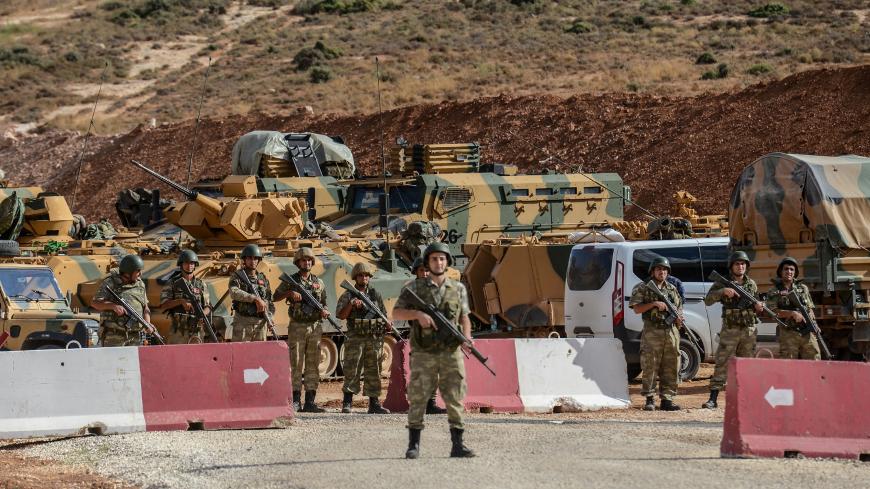 As Turkey kept up its offensive against Syrian Kurdish militants in Afrin for an 11th day, President Recep Tayyip Erdogan reportedly agreed with his Russian counterpart Vladimir Putin to accelerate efforts for Turkish peacekeepers to deploy deeper into Idlib, where al-Qaeda-linked Hayat Tahrir al-Sham (HTS) rebels still hold sway. Sources from Erdogan’s presidential palace quoted by Reuters added that the two leaders had discussed the results of a Russian-hosted conference assembling members of the Syrian opposition that was held a day earlier in the Black Sea resort town of Sochi.

Critically, their exchange came a day after a Turkish military convoy was targeted by a car bomb in Idlib. A Turkish civil servant died and a soldier and one other civilian were wounded in the blast, which presages a dangerous new escalation in the nearly seven-year-old conflict. The convoy was reportedly dispatched to honor Turkey’s pledges to deploy troops further south to monitor de-escalation zones in Idlib along the line of contact between HTS rebels and regime forces.

In October, Turkish troops took up positions on the northern periphery of the rebel-held northwest, in the Aleppo countryside just south of Afrin under the terms of the Astana agreement co-sponsored by Iran and Russia. Turkey has since faced sharp rebukes from Russia for its apparent disinterest in rolling back HTS influence, using its presence to squeeze the Syrian Kurds instead. That HTS militants escorted the Turkish convoy cast a further shadow on Turkey’s real plans.

The Turkish General Staff blamed Monday’s blast on the Syrian Kurdish People’s Protection Units (YPG), the group that is the target of Turkey’s incursion in Afrin. But analysts monitoring the conflict question Turkey’s version of events.

Many believe the attack is the inevitable result of the clash of interests in the highly coveted northwestern wedge of Syria, which remains critical to Turkish influence — and the survival of the regime of President Bashar al-Assad.

A commander for the YPG-led Syrian Democratic Forces (SDF) insisted in a telephone interview that his group had no role in the blast. “Our forces are not in that region; how could we have carried out the attack? And why has the YPG not claimed responsibility?” he asked.

But the pro-Kurdish Firat news agency reported the SDF had done just that.

The fog of disinformation shrouding the Turkish operation called Olive Branch and its activities in Idlib is so thick that it’s hard to establish the facts on the ground. Some reports indicate that the Turkish convoy fell under attack at least twice that day in Idlib.

Many analysts suggest that the real perpetrators were either the regime or its top ally, Iran. Both viscerally oppose further Turkish penetration in Syria, as do the Kurds. The big question is what Russia's role was in the affair.

The Washington-based Institute for the Study of War argued in a research note, “The Assad regime and Iran attacked Turkish forces that deployed into Syria with apparent Russian permission to establish a blocking position near a critical front line south of Aleppo city.” The authors, Elizabeth Teoman and Jennifer Cafarella, maintained that Turkish forces had already done a reconnaissance tour near the front-line village of al-Eis, and had coordinated its deployment with HTS. Then, “unidentified pro-Assad regime forces attacked Turkey’s convoy with artillery fire as it transited through opposition and al-Qaeda-held terrain, forcing the convoy to stop short of its objective.” The Turkish deployment near al-Eis would have given Turkey leverage over Iran and the regime forces by obstructing their potential moves to lift a siege on two Shiite-majority towns, Fua and Kefraya, north of ldlib city.

A European security analyst who closely monitors the Syrian conflict and uses the Twitter handle “Nikopol5” told Al-Monitor that the attack on the Turkish convoy may have also been prompted by Ankara’s false expectations. “Turkey believed that the regime would halt its offensive against HTS after capturing the Abu al-Duhur air base [in southeast Idlib], leaving the rest of the province as some kind of a rebel-run Turkish protectorate.”

The Turkish deployment to the south of Aleppo fulfills Russia’s demands for Ankara to meet its Astana obligations, which may explain why Moscow did not publicly object to it. Broadly speaking, Russia wants Turkey to help wrest Idlib from HTS and allow the regime to re-establish control there and probably in Afrin as well. But neither Iran nor the regime trust Turkish motives. Thus, for now, in this critical corner of Syria, Turkey and Russia appear to be configured against the pair, with the Kurds squashed in between.

But the reality is far more complex and Nikopol argues that Russia, as the ultimate arbiter of this patch, probably did not authorize the Turkish deployment, whose primary objective — to disrupt any further regime advances — may well have been at odds with the Russian strategy. Thus “Russia sat on its hands as the regime forces attacked the Turkish convoy,” the analyst said.

In an apparent sop to the Kurds, Russian Foreign Ministry spokeswoman Maria Zakharova said several hundred people, including civilians, had died in Turkey's Afrin offensive so far. Perhaps Russia is flashing a first "amber light" to Turkey, the Twitterati mused.

Umit Kivanc, an independent Turkish columnist and documentary filmmaker who blogs about the Syrian conflict, agrees that pro-Iran and regime forces working in tandem most probably carried out the artillery attacks that forced the Turkish convoy to retreat. “The bit of the mystery that remains unsolved,” he told Al-Monitor, “is whether Russia was aware of the [first] attack or not.” As for Turkey’s claims that the YPG carried out the car-bomb attack, “How could it have done so in the midst of a jihadi-run area?” Kivanc asked. “Turkey has many more enemies there than it knows and friends who could rapidly become its enemies,” he observed.

The abiding contradiction in Kivanc’s view is that the regime wants to clear and control Idlib and Moscow wants Turkey to persuade the jihadis there to withdraw. The trouble, he said, is that “none of the groups in Idlib are ones that Ankara has much influence over, and HTS calls the shots.” HTS is cooperating with Turkey for now because “it knows that otherwise it would get struck by Russian jets.” Kivanc believes that at a certain point, Russia, Syria and Iran will inevitably combine forces to root out all the jihadis in Idlib and that Turkey will find itself facing a new wave of refugees. What will Turkey do then with its Free Syrian Army allies, and what will happen to some 10,000 al-Qaeda-linked Uighur Turk fighters?

“As far as I can see, even the most prominent global analysts remain clueless as to the future of Idlib,” he concluded.