As Turkey's Operation Olive Branch diverts Syrian Kurdish forces from the coalition fighting the Islamic State, a growing number of analysts believe that Washington’s efforts to simultaneously manage Kurdish, Turkish and Russian expectations in Syria are starting to unravel. 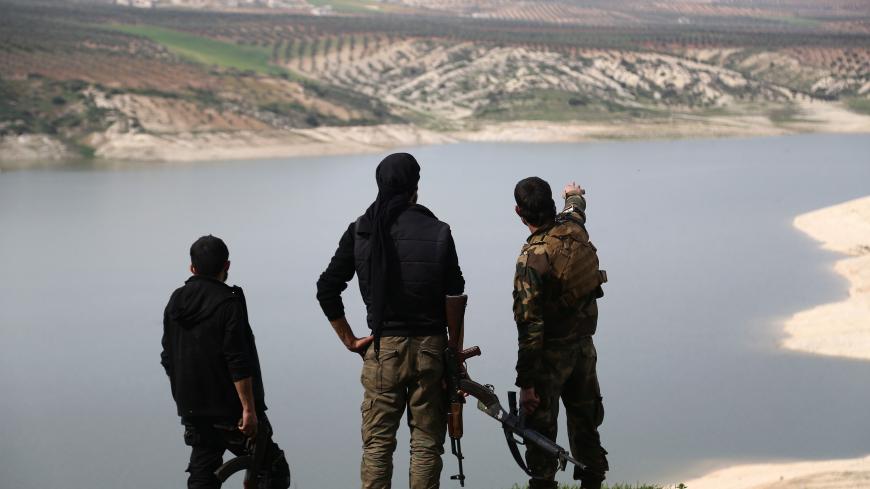 Opposition fighters look out over Lake Maydanki, north of the Syrian city of Afrin, after they took control of the nearby village of Ali Bazan, March 4, 2018. - NAZEER AL-KHATIB/AFP/Getty Images

It's official: Turkey’s military offensive against Syrian Kurdish forces in Afrin has disrupted the US-led coalition’s fight against the Islamic State (IS) in Syria. The Syrian Kurdish People’s Protection Units (YPG), which spearheads the fight against IS there, is redeploying hundreds of its men and women to defend Afrin, a mainly Kurdish city in northwestern Syria. The result is what a Pentagon spokesman yesterday labeled “an operational pause” in the ground campaign against IS remnants in the Euphrates River Valley bordering Iraq.

Col. Rob Manning sought to downplay the significance of the hiatus, telling reporters US airstrikes against IS holdouts in the area are continuing. “The nature of our mission in Syria has not changed,” he said, adding the YPG-led Syrian Democratic Forces (SDF), which includes thousands of Arab fighters, remained the coalition’s “major partner” in the battle against the jihadis.

At a news conference on Tuesday, the SDF confirmed it would pull 1,700 fighters out of areas of eastern Syria in order to bolster its defenses in Afrin. "We took the difficult decision to pull our forces out of Deir ez-Zor province and battlefronts against [IS] to head to the Afrin battle," Abu Omar al-Idlibi, an SDF commander, told Agence France-Presse. "We fought [IS]. We helped the coalition in Raqqa, but without the coalition defending its partners," Idlibi said. "Our people in Afrin are our priority. Protecting them is more important than the international coalition's decisions.”

A Western official familiar with coalition planning said the decision to suspend the ground offensive was “not new.” The official told Al-Monitor on condition of strict anonymity, “It's not the YPG saying ‘you know what, we’re stopping.’ It’s the fact that they pulled fighters to Afrin and to complete the last, very difficult phase of operations against [IS], the coalition needs those fighters.” The official continued, “So the major offensive maneuvers over the vast stretch of territory in the east have paused. There are a ton of Arab fighters down there but the last phase is a fairly significant operation. Arabs don’t want to do it without the Kurds. But we are still killing IS every day."

An SDF commander contacted via WhatsApp in the YPG-controlled city of Kobani told Al-Monitor the decision to pause operations in the Euphrates River Valley was tactical and did not affect the SDF’s alliance with the United States and the anti-IS coalition. Yet he acknowledged that it was “also political.” The commander said, “Not just America but the whole world has remained silent in the face of Turkish massacres in Afrin. The United States has done little to stop Turkey in Afrin. When will they act?” Asked when the ground offensive against IS in eastern Syria would resume, the commander replied, “I don’t know.”

The United States justifies its inertia over Afrin on the grounds that it lies outside the coalition’s informal zone of control and that there are no coalition forces based there. Jennifer Cafarella, a senior intelligence planner at the Institute for the Study of War, told Al-Monitor, “The US has distanced itself from the Afrin Kurds in an arbitrary distinction between those YPG forces and the YPG forces in eastern Syria. In reality, Afrin is an integral component of the YPG and its governing project.”

For weeks now, top US officials including Defense Secretary James Mattis, US Central Command commander Joseph Votel and others have warned that Turkey’s Operation Olive Branch in Afrin was distracting from the anti-IS campaign. At the same time, they have been taking pains to underline that they understand Turkey’s security concerns. The YPG is closely affiliated to the Kurdistan Workers Party (PKK), which has been waging a bloody insurgency for Kurdish self-rule inside Turkey since 1984. Turkey makes no distinction between the pair, labeling both terrorists. While the PKK is on the State Department’s list of designated terrorist organizations, the YPG is not. The loophole has allowed the Pentagon to arm and train the YPG, leading to a meltdown in US-Turkish ties.

Turkish leaders believed the partnership would be shelved once the battle to wrest Raqqa, the “capital” of IS' so-called caliphate, was completed, largely because their US interlocutors intimated as much in private discussions. But when Secretary of State Rex Tillerson announced last month that US troops would remain in Syria to, among other things, counter Iranian influence and squeeze Syrian President Bashar al-Assad out of power, Turkey saw red. With a similarly incensed Russia’s blessings, Turkey launched Operation Olive Branch on Jan. 20. It was as much about forcing the United States to choose between itself and the YPG as for domestic political and security reasons. For Russia, it was as much about forcing the YPG to choose between the United States and the Syrian regime as to secure Turkey’s cooperation against al-Qaeda-linked militants in Idlib.

Indeed, a growing number of analysts believe that Washington’s efforts to simultaneously manage Kurdish, Turkish and Russian expectations in Syria are starting to unravel and that in the words of the SDF commander, IS is “thanks to Turkey, reaping the fruit.”

Cafarella agreed that the conflict in Afrin is undermining the campaign to defeat IS. “The YPG’s fight against Turkey in Afrin has created significant risk to the coalition’s ability to hold the terrain it has seized from IS to date,” she said. “The balancing act the US is attempting to maintain in Syria is not sustainable.” This is because “America’s NATO ally Turkey and America’s local partner the YPG are at war. The US refrain that all actors in Syria must remain focused on defeating IS is naive and misses the point.”