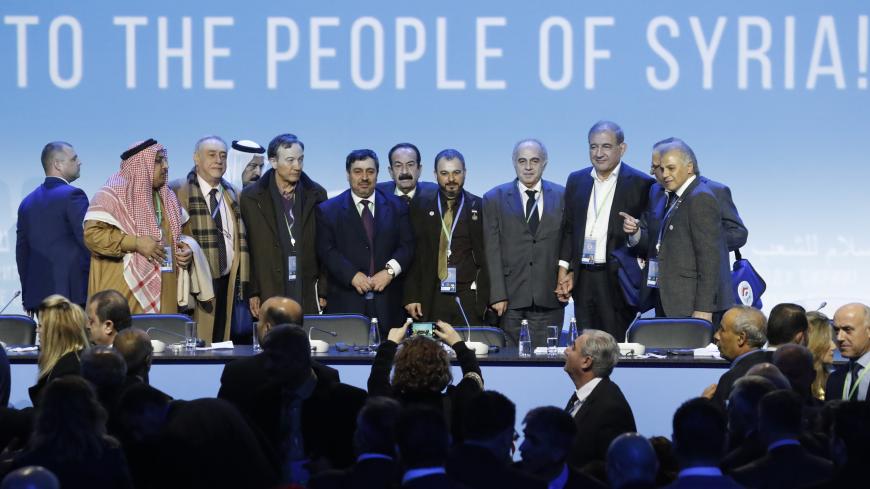 Attendees pose after a session of the Syrian Congress of National Dialogue in the Black Sea resort of Sochi, Russia, Jan. 30, 2018. - REUTERS/Sergei Karpukhin

The meeting of the Syrian National Dialogue conference in Sochi recently was a victim of Turkey’s military invasion of northern Syria, which has now entered its second week.

More than 1,500 Syrian delegates attended the Russian-hosted all Syrian “dialogue” in Sochi, which included unusual crosstalk between representatives of the government and those from groups outside the government. Despite the unwieldy proceedings and inconclusive results, the scale and scope of the discussions cannot be easily dismissed, despite the absence of key opposition groups and the failure of the meeting to ramp down the recent uptick in fighting.

While the boycott of the mainstream opposition High Negotiation Committee was expected, the absence of any Syrian Kurdish parties also meant that Turkey’s military operation against the People’s Protection Units (YPG) was not on the conference agenda.

“Not only was the Syrian Kurdish Democratic Union Party (PYD) absent from Sochi, but also absent was its main rival, the Kurdish National Council — a pro-Massoud Barzani alliance recognized by Turkey,” writes Cengiz Candar. “In sum, there was no real Syrian Kurdish representation in Sochi. The Syrian Democratic Forces (SDF), which control a sizable swath of Syrian territory, were not in Sochi either.” (Barzani is the former president of the Kurdistan Regional Government in Iraq.)

Maxim Suchkov explains, “For Russia, the issue of Kurds in Syria has at least three facets: relations with Turkey, with the Kurds themselves and with the United States. … Moscow’s stance on Afrin is in line with its stance on all of Syria and with its broad Middle East policies: Steer away from crises where Russia's own security interests are not directly at stake. With Turkish President Recep Tayyip Erdogan, it's a very fine line to tread, but as long as Turkey and Russia continue to maintain military, intelligence and presidential channels, Moscow is unlikely to meddle in what's seen as a bigger security concern for Turkey than for Russia.”

Suchkov adds, “Yet Turkey’s military solution for Afrin is an option Moscow has sought to dodge. The Syrian Democratic Forces (SDF) rejected Russia’s proposal to let Syrian government forces take control of Afrin. The plan was designed to address Ankara's concerns about the Kurds controlling a corridor of land along Turkey's border and to give Assad control of more Syrian terrain. But that idea didn’t sit well with Kurdish demands of autonomous rule. Russia was first to propose the concept of including Kurdish autonomy in a new Syrian Constitution, which, back in the day, perturbed Turkey and excited the Kurds. Russia believes the issue of Kurdish autonomy should also be negotiated.

"Therefore, the popular line of criticism about 'Russia betraying the Kurds' doesn’t seem to bother Moscow on its merits. Some of the Kurdish groups have been in contact with Russian authorities at the Khmeimim-based Russian Reconciliation Center for Syria. Russia had no formal commitments to the Kurdish nationalist Democratic Union Party (PYD), which has long played its own game between Ankara and Damascus and has ultimately opted to work with the United States rather than Russia.”

Mohammed al-Khatieb, reporting from Azaz, writes that at the Saju refugee camp, just across from the Bab al-Salam crossing, displaced Syrians live “in tents that fail to shield them from the cold winter. The camp roads, unpaved, are mired in mud after two weeks of rain.” Khatieb adds that while residents of Afrin oppose the Turkish invasion, many Syrian Arab refugees who ended up in squalid camps near the Turkish border back Operation Olive Branch and blame the YPG for their plight.

The Turkish government is making it known that most of the weapons used in Operation Olive Branch are of Turkish origin. Zulfikar Dogan writes, “Ankara’s emphasis on the use of Turkish-made weapons in the Afrin campaign is meant to send out a dual message: to highlight the progress in the Turkish defense industry and give a gleeful response to foreign critics who advocate the halt of arms sales to Turkey or oppose the use of weapons made in their countries in the Afrin offensive.”

Dogan continues, “Turkey has previously failed to acquire armed and unarmed drones from the United States due to congressional objections. In September, the US Senate blocked the sale of Sig Sauer guns to Erdogan’s security guards after members of his security detail assaulted protesters during Erdogan's visit to Washington in May.”

Dogan adds, “Erdogan’s son-in-law Selcuk Bayraktar, whose family business produces armed and unarmed drones for the Turkish military, was also eager to announce that his company’s drones were in action in the Afrin campaign. Bayraktar’s Twitter message was accompanied with a picture of him in front of screens in the army’s drone control room. Yet another familiar face — the president’s son Bilal Erdogan — was seen in the picture, and his presence in the control room without any official duty did not go without criticism.”

Amberin Zaman writes that Russia-Turkey ties in Syria are also strained in Idlib. Any tensions between Russia and Turkey over Idlib may become even more acute after the al-Qaeda-linked Hayat Tahrir al-Sham (HTS) there shot down a Russian plane and killed its pilot Feb. 3.

Turkey has faced “sharp rebukes from Russia for its apparent disinterest in rolling back HTS influence,” Zaman writes. “using its presence to squeeze the Syrian Kurds instead. That HTS militants escorted the Turkish convoy cast a further shadow on Turkey’s real plans.”

Zaman adds, “The Turkish deployment to the south of Aleppo fulfills Russia’s demands for Ankara to meet its Astana obligations, which may explain why Moscow did not publicly object to it. Broadly speaking, Russia wants Turkey to help wrest Idlib from HTS and allow the regime to re-establish control there and probably in Afrin as well. But neither Iran nor the regime trust Turkish motives. Thus, for now, in this critical corner of Syria, Turkey and Russia appear to be configured against the pair, with the Kurds squashed in between.”

Despite tensions over Sochi, Afrin and Idlib, Russian President Vladimir Putin and Erdogan are committed to holding together the at-times shaky Astana consensus. It was no surprise that the two presidents, who talk often, spoke by phone Jan. 31, immediately after the Sochi conference.

“The Turco-Russian alliance that led the Astana process did not complement Geneva but in a way was aimed to replace it,” Candar writes. “With a Russia that has become a formidable rival to the United States in the Syrian theater, with a Turkey outraged by Washington’s support for the adversarial Syrian Kurdish People’s Protection Units (YPG), and with Iran seen as a hostile element by the Donald Trump administration, Geneva is becoming increasingly irrelevant to resolving the Syrian conflict.”

by Murielle KASPRZAK and Joseph SCHMID | AFP | May 26, 2022
END_OF_DOCUMENT_TOKEN_TO_BE_REPLACED