As Turkish forces continue their offensive on Kurdish-controlled Afrin, Russia's playbook there seems to call for a level field and level heads. 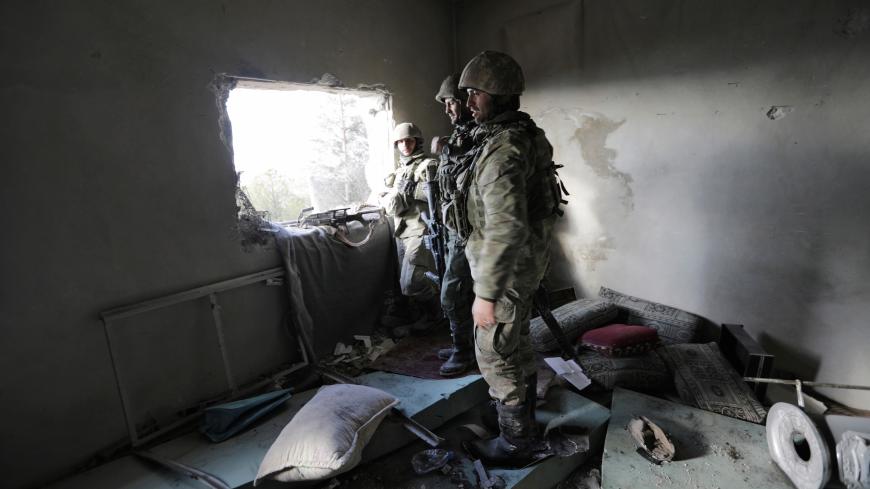 MOSCOW — Turkey’s offensive into the northern Syrian province of Afrin has been underway more than a week, raising concerns that Ankara will open a new full-fledged front in Syria with potential implications for the region's overall security. During a Russian Foreign Ministry briefing Jan. 25, ministry spokeswoman Maria Zakharova defended Russia against the Kurdish assertion that Moscow is siding with Turkey in Afrin.

“Does Russia have to bear responsibility for Turkey’s actions?” Zakharova asked. “We have [our own] foreign policy, and a clear attitude toward engaging Kurds into the political process [in Syria].”

A Kurdish reporter said it's hard to believe a resolution to the Syria crisis can be near, when Turkey just "launched a long-term operation." The reporter said, "Could you ask your partner, Turkey, to address these issues differently with the Kurds?"

In response, Zakharova alluded to the challenging nature of discussions between Moscow and Ankara on the issue. “You know we’ve just climbed out of the crisis [with Turkey]," she said, referring to recently thawed relations after Turkey shot down a Russian jet in November 2015. "You don’t need to tell us how difficult a partner Turkey is. It’s a country with its own interests, which don’t always coincide with ours. … Our goal, however, is to find areas of common interest with any partner regardless of how difficult they are. It’s not easy to do even at the bilateral level, let alone in the Syrian settlement.”

For Russia, the issue of Kurds in Syria has at least three facets: relations with Turkey, with the Kurds themselves and with the United States. At this point, all three areas have to be squared with what Moscow now sees as its primary task: convening the Syrian National Dialogue Congress this week in Sochi, which Moscow hopes will jump-start negotiations toward a political settlement that can then be turned over to Geneva.

Moscow’s stance on Afrin is in line with its stance on all of Syria and with its broad Middle East policies: Steer away from crises where Russia's own security interests are not directly at stake. With Turkish President Recep Tayyip Erdogan, it's a very fine line to tread, but as long as Turkey and Russia continue to maintain military, intelligence and presidential channels, Moscow is unlikely to meddle in what's seen as a bigger security concern for Turkey than for Russia.

Besides, as an Al-Monitor article reported earlier this month, after the Syrian National Dialogue Congress from Jan. 29-30, it will be of principal importance to Russia to maintain the support of Iran and Turkey and to keep the trio more or less united on major issues. Turkey has recently been pivotal to Russia in hosting the Sochi congress and letting Syrian President Bashar al-Assad's forces take control of parts of Idlib. By and large, Ankara has been constructive regarding Russia's “go-to” role as a contact to important Syrian opposition groups. Moscow has no reason to upset the fragile balancing act with Ankara at this critical moment.

Yet Turkey’s military solution for Afrin is an option Moscow has sought to dodge. The Syrian Democratic Forces (SDF) rejected Russia’s proposal to let Syrian government forces take control of Afrin. The plan was designed to address Ankara's concerns about the Kurds controlling a corridor of land along Turkey's border and to give Assad control of more Syrian terrain. But that idea didn’t sit well with Kurdish demands of autonomous rule. Russia was first to propose the concept of including Kurdish autonomy in a new Syrian constitution, which, back in the day, perturbed Turkey and excited the Kurds. Russia believes the issue of Kurdish autonomy should also be negotiated.

Therefore, the popular line of criticism about “Russia betraying the Kurds” doesn’t seem to bother Moscow on its merits. Some of the Kurdish groups have been in contact with Russian authorities at the Khmeimim-based Russian Reconciliation Center for Syria. Russia had no formal commitments to the Kurdish nationalist Democratic Union Party (PYD), which has long played its own game between Ankara and Damascus and has ultimately opted to work with the United States rather than Russia. Turkey considers the PYD to be associated with terrorist groups.

“The Kurdish factor, of course, has been played out by our Western partners for several years, but not in the interests of the Kurds,” said Zakharova at the briefing. “[Russia] was at the basis of political involvement of Kurds into the Syrian settlement process. … [Russia] was urging Western and regional colleagues to include [the Kurds] into different negotiations formats. When we all had a chance to stop the bloodshed and form a broad coalition to unite Syrian opposition, the West was telling the Kurds to ignore it. Ask yourselves whose interests were being served by this. And then see how consistent our own position [on Kurds] was.”

Moscow has repeatedly called Washington's move to set up a border force with militants from the People’s Protection Units (YPG) an attempt to “insulate Kurdish-dominated regions,” which would flare tensions. Russian criticism, however, has a dual purpose: Pin the blame for any breakout of hostilities in Afrin on the United States and send a signal to the Kurds for failing to have chosen the "right" partner.

Once Washington encountered a harsh response from Turkey and faced the potential implications of a broader regional crisis, Secretary of State Rex Tillerson backpedaled on the decision a few days later, saying Jan. 17: "The entire situation has been misportrayed. … We are not creating a border security force at all." The statement didn't stop Turkey from proceeding with its Afrin offensive Jan. 19 or change Russia’s belief that the United States plans to divide Syria using the SDF and its affiliates.

Yevgeny Satanovsky, who heads the Moscow-based Institute for the Middle East and is known for his ties with Russian security, argued that Russia’s stance in Afrin ultimately plays well with both Ankara and Washington. “The US has been training SDF forces for an offensive on Idlib and hoped to make it there before the Russian-supported Syrian government forces. Given the radical Sunni Arab composition of the Idlib area, all Arab tribes and groups would have risen against the Kurds. … The Arabs already suspect that the Americans want to create in Syria an analog of the Iraqi Kurdish semi-state enclave, thus warming up the mood of the Kurds in favor of the "Great Kurdistan."

He added, “The Americans probably hoped Russia would impede Turkey from the military operation. But the offensive may also drag Erdogan into a long-haul conflict. Even if Turkish forces eventually occupy Afrin, they will get a protracted guerrilla resistance and further complicate their relationship with Kurds. This, in turn, will distract much of both SDF and Ankara’s combat force."

The “failed expectations” the Kurds may have had regarding Russia's position on the Afrin offense stem first from the PYD leadership miscalculating its own resources on the ground; second, from overestimating the scale of American support and commitment to their force and political cause; and third, underestimating the importance of the Sochi congress in Russia's game plan for the Syrian settlement.

The Kurdish forces have proved to be skillful fighters and have contributed immensely to the defeat of various radical forces, including the Islamic State, but their leadership’s strategic hopscotching — be it in Iraq or Syria — so far has served their cause poorly. Major regional and international powers have figured this out, some sooner than others, and have learned to exploit these gaps to push their own interests.

Russia’s relations with the PYD are likely to be sour, at least in the short term. The Kurds are disappointed with Moscow. The Kurds' emotional decisions — such as blaming Russia for the trade-off, threatening to review their Russia policies and declining to attend the Sochi conference — won’t alter Russia’s agenda.

Moscow believes that without influential Kurdish groups attending the congress at Sochi, deals can still be made there, but might not hold. For the short term, Russia is savvy enough to figure out a way to get some Kurds to attend and package whatever decisions are made as representing Kurdish interests. As for not having the PYD in attendance, Moscow doesn’t see that as its own failure, but rather expects the PYD's absence to create a long-term problem for itself.

“We sent our invitation to the Kurdish representatives. The ball is now on their side not only to accept it but to play an active role in this format,” Zakharova stressed at the briefing.

Early on the first day of the Sochi meeting, some Kurds were present, but it was difficult to tell how many or what groups they represented.

Moscow also still believes there are options for settling the Afrin crisis. One such option echoes the initial Russian proposal and involves Syrian government forces entering the Kurdish-controlled area and creating joint local governance institutions. This ups the ante of risking the Syrian and Turkish armies confronting each other in direct fighting. But it may also be a way to end the fighting in Afrin and adjacent areas, as long as Turkey receives guarantees of a 20-mile-deep “secure zone.” In this case, Turkey would want to have the United States end its military support to the YPG. Russia, in turn, would want to see the United States not impede the Kurds from joining the Moscow-led political settlement.

Recently, Kurdish authorities in Afrin issued a letter urging the Syrian government “to undertake its sovereign obligations to protect its borders [from the Turkish offensive].” Though the letter doesn’t mention whether Kurdish officials see passing Afrin to Damascus control as an option, it might be a sign that a reality check is pushing the Kurds to consider options they previously resisted.

If, however, the crisis continues and the operation takes longer than originally planned, the Turkish military might continue to expand its presence and never agree to leave. Even if it would agree, it would be more of a “Russian-style departure,” where significant combat forces remain. This would create more political and on-the-ground challenges for Russia’s Syria policies.

In the meantime, Moscow will move cautiously in Afrin, keeping an equal distance from what it sees as "radical demands" of Turkish and Kurdish parties.