The Kremlin’s contradictory behavior in Syria

Russia and Turkey consider establishing a military base in Idlib, Syria, as Moscow encourages the Collective Security Treaty Organization to deploy peacekeepers. 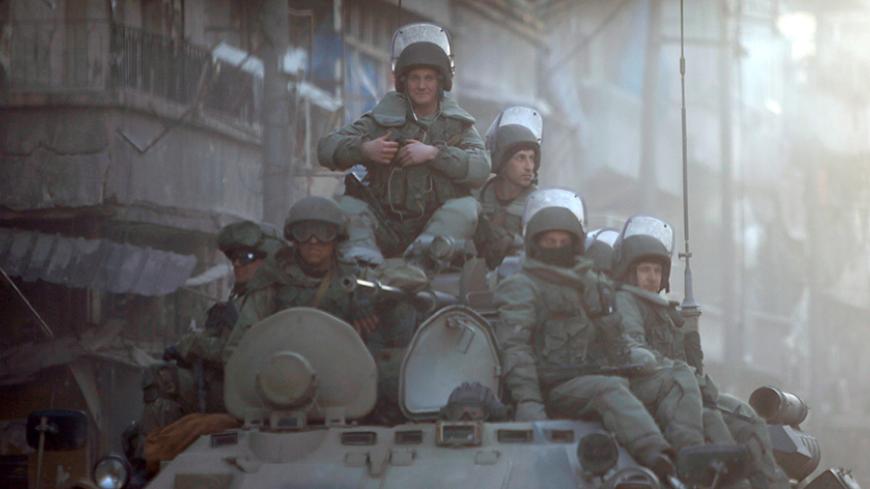 The Kremlin is seeking to flesh out the idea of creating four de-escalation ("safe") zones in western war-torn Syria while trying to help President Bashar al-Assad regain control of lost territories in the east. When it comes to the west, Moscow is talking about the de facto end of the civil war and aims to covertly weaken the Syrian opposition. As for eastern Syria, Russia is trying hard, though discreetly, to distance itself from the US-Iranian confrontation and preserve communication channels with Washington. It is also advocating decreasing the influence of both the United States and Kurds and urging pro-Kremlin oligarchs to help fix the economy.

Russia's policy in Syria seems successful, and that appearance is meant to impress the Russian population ahead of the 2018 presidential election. In reality, however, Moscow is confronted with a range of problems as it proceeds with its purely tactical plans. Syrian government troops continue fighting in Daraa province, and the Southern Front — the rebel alliance that until recently had hardly opposed the regime — boycotted the fifth round of negotiations in Astana, Kazakhstan, which resumed July 4.

Some Russian analysts, referencing their sources in the Ministry of Foreign Affairs and Ministry of Defense, argue that Russian military and political leaders are well aware that Iran and Assad intend to prevent the UN's peace plan from succeeding. (The UN Security Council unanimously adopted the plan, Resolution 2254, in late 2015.) The analysts worry that Tehran and Damascus might try to convince Moscow to not cooperate as well.

Russia openly stands by its allies. For instance, to justify the Syrian government’s blocking of Tabqa, Moscow went so far as to accuse the United States and the Kurds allied with the Syrian Democratic Forces (SDF) of colluding with the Islamic State (IS). Moreover, Russia has warned that it will target US planes flying west of the Euphrates — though US aircraft hardly ever operate there anyway.

One of the weakest points of Russia’s de-escalation zone plan is the problem of how to fight radical forces if Assad would have to launch an offensive through territory controlled by moderate opposition, given that Assad and moderates have signed a truce. The exacerbation of relations between the Kurds and Assad’s forces will give Turkey more leeway regarding Idlib, positioned deep in enclaves controlled by the radical opposition alliance Hayat Tahrir al-Sham (HTS). Yet such exacerbation would discourage new players from engaging in the peace settlement, which the Kremlin would have welcomed.

Turkey is dissatisfied with the outcome of Operation Euphrates Shield. Ankara was only able to secure an area of 2,015 square kilometers (778 square miles) in northern Aleppo — half the planned area of 5,000 square kilometers (1,931 square miles). The operation also failed to dissuade the new US administration from relying on the Kurdish People's Protection Units (YPG) during the storming of Raqqa. During the Astana talks, Ankara insisted on extending the northern de-escalation zone not only to Idlib province, but also to the adjacent, opposition-held territories in Latakia, Aleppo and Hama. Turkey sees these territories as areas of its potential influence, given that local populations and moderate militant groups there are cooperating with the Turks.

A source close to Russian intelligence services told Al-Monitor on condition of anonymity that Moscow has considered two options for Idlib. The first was to back the advancement of pro-Assad forces, which would inevitably trigger escalation, drag Russia further into the Syrian conflict, and affect its foreign policy, economy and internal security. The second option implies close cooperation with Turkey. Ankara is reluctant to welcome new Syrian refugees to its territory, still, it is ready to send its special forces to support the "moderate" rebel groups against HTS in exchange for concessions related to Syrian Kurds.

In Syria's east, the race to maximize territorial gains creates favorable conditions between Damascus and Ankara. Both have difficult relations with the Kurds and could find common ground by cooperating against them.

After the US downing of the Su-22 that allegedly attacked the SDF, the al-Muatasim Brigade — a faction of the Turkey-supported Free Syrian Army, — withdrew from talks with the SDF about al-Muatasim taking over control of 11 villages from the Kurds. Moreover, Assad's troops closed off the Aleppo-Afrin road, while Turkey started redeploying its troops and equipment south and west of Azaz for an offensive against the Kurdistan Workers Party (PKK) in Tell Rifaat and Afrin.

A source in the Russian Defense Ministry confirmed for Al-Monitor that Moscow and Ankara have coordinated a joint offensive designed to allow Turkey to achieve two goals: weaken the US-supported, Kurdish nationalist Democratic Union Party (PYD), an offshoot of the Kurdistan PKK; and gain a sufficient foothold for further peacekeeping activities against HTS, which isn't a party to the truce.

“The preliminary agreement implies that a small group of Russian military advisers will stay in Afrin to act as an intermediary between the Kurds and Assad. In its turn, Turkey will gain control of the sites it deems vital,” the source said.

However, it was uncertain whether the agreement addressed 41 PYD/PKK facilities in northern Aleppo province and provided for a corridor from Azaz to Idlib. A corridor would link Turkey's zone of influence north of Aleppo with opposition enclaves in Idlib, which could weaken the Kurds and make them more cooperative with Russia and Assad.

"Moscow is keen to secure Kurdish loyalty to Damascus, and in a way would want to punish Kurds for prioritizing relations with the US over dealings with Syrian and Russian military. But it equally opposes fighting across the entire Afrin canton," the source added.

Ankara is aiming to control only the eastern and southern parts of Afrin canton, to link Idlib with the area recovered during Operation Euphrates Shield. However, the Kurds say Turkey wants to control all of the Afrin canton. If they halt the offensive on the IS stronghold of Raqqa to shift troops to Afrin, that action "could bring about heavy civilian casualties and trigger a tough US response,” the source said.

In theory, Turkish troops can't join the operation against the HTS if they are deployed in the safety zone in Idlib. If they were stretched thin trying to do both, the troops would be easy prey for radical groups. Al-Monitor sources in Turkey close to military officials say Ankara is considering establishing several military facilities in Idlib. Turkey would be backed by the opposition troops that previously engaged in Operation Euphrates Shield.

A joint Turkish-Russian military group reportedly has deployed to Sheikh Barakat Mountain on the border of Idlib province. Turkish troops may access Idlib from two areas — either from the border village of Atma to the town of Darat Izza and Sheikh Barakat Mountain west of Aleppo, or through Salqin and Harem. Moscow has no choice but to rely on Turkey in terms of separating opposition groups, which may presuppose the military crackdown on notorious jihadists, as well as lure some non-al-Qaeda groups to join Ahrar al-Sham. Such attempts have been made already, and as the pressure over the HTS continues, some of its fighters may want to join other “moderate” groups.

However, such complicated scenarios — currently, diverse HTS units control about 80 out of 156 local councils in Idlib — with an ill-conceived cease-fire mechanism undermine Moscow’s peacekeeping efforts to involve its closest allies from among post-Soviet states: Kazakhstan and Kyrgyzstan.

On June 22, Vladimir Shamanov, the head of Russia's State Duma Defense Committee, said proposals were being worked out for Kazakhstan and Kyrgyzstan, Russia’s allies in the Collective Security Treaty Organization (CSTO), to join the military campaign in Syria. The next day, authorities of both states denied reports about the negotiations. A similar proposal was made to Armenia, whose security forces have long conducted undercover operations in Syria to protect Armenian ethnic enclaves. The Armenian forces accumulated considerable experience in peacekeeping in Iraq, Kosovo, Afghanistan and Lebanon. “Kazakhstan’s peacekeeping battalion took part in minesweeping in Iraq. Even though Astana has used a multifaceted approach and spared no effort to be perceived as a reliable mediator, it can be forced to deploy a small military contingent. Kyrgyzstan can be compelled to follow suit, as Russia has recently written off [Kyrgystan's] new debts,” an official from the Russian military-industrial complex told Al-Monitor.

In sum, it’s possible that if there's a flare-up between the Kurds and Damascus, Turkey may make the most of the situation and take its own actions, reneging on its agreements with Moscow. In turn, Russia may convince CSTO allies of the need to send troops to Syria — even though it won’t be easy.

That said, however, Russia’s position on the Kurds isn’t linear. Moscow doesn’t strictly oppose a Turkish operation as Turkey's way to make the Kurds pay for their dealings with Washington. Yet the presence of Russian forces in Afrin is still supposed to be a formal demonstration of defending the Kurds, even though the Russian forces won’t hamper Turkey’s offensive. However, there’s a serious risk that outside interference into Idlib will create new alliances in the opposition, not their separation into “moderate” and “radical” factions.