Russia, Turkey and Iran met with opponents of Syrian President Bashar al-Assad’s regime to ink an agreement on the four safe zones. 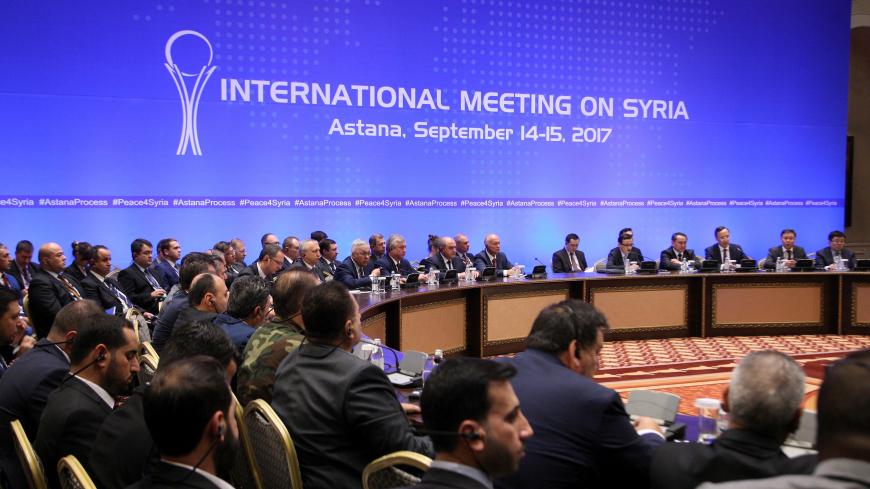 The long-awaited sixth round of Syrian peace talks produced a signed agreement delineating the four de-escalation zones in the country, which has been torn apart by civil war since 2011.

The talks, held Sept. 14-15 in Astana, Kazakhstan, went smoothly for the most part. For the first time, the Sunni Salafist militant group Ahrar al-Sham agreed to come to Kazakhstan. Previously, the opposition faction had always declined to participate, yet ensured its indirect representation through the presence of the Alwiyat Suqour al-Sham faction.

The participants were able to finalize the fourth zone, in Idlib. The other zones are in Homs; southern Syria; and eastern Ghouta on the Jordanian border. Russia, Turkey and Iran agreed to act as guarantors of the cease-fire.

In August, the talks had been scheduled several times only to be postponed again and again. This time, everyone waited expectantly to see details of the fourth zone, which is designed to weaken the radical coalition of Hayat Tahrir al-Sham (HTS). In addition to Idlib, the zone will include parts of Idlib’s neighboring provinces of Latakia, Hama and Aleppo.

The arrangements are considered provisional — a temporary measure for a fixed term of six months. The agreement would be automatically extended if needed, based on a consensus among the guarantor states. As Russian delegation leader Alexander Lavrentyev explained, Moscow hopes tensions will decrease enough within six months that any extension would be short.

A joint communique issued by Kazakhstan’s Foreign Affairs Ministry after the meeting states that Iran, Turkey and Russia are committed to establishing a joint coordination center and temporarily deploying military units in Idlib to manage the de-escalation process. The zones will be based on maps jointly drawn Sept. 8 in Ankara, and technical meetings will be held to determine deployment areas.

Lavrentyev claimed that the three guarantor states will send as many as 1,500 observers to the Idlib zone, with Russia deploying military police rather than combat troops.

He urged the Syrian opposition to revise its attitude toward a military change of power in the country. Some opposition groups are working to create unified coalitions under the banner of the Syrian National Army to continue their fight against the regime of President Bashar al-Assad. Their goal, he said, appears to be “ousting the legitimate and internationally recognized authorities in Damascus” and is likely to interfere with the continuing campaign against the Islamic State and Jabhat Fatah al-Sham, formerly Jabhat al-Nusra. The latter leads a coalition that currently controls Idlib.

The idea does, however, make a domestic audience happy, and Lavrentyev — who is also Russian President Vladimir Putin’s special envoy for a Syrian settlement — said the local populations already are encouraging the moderate armed opposition groups operating in the de-escalation zones to patch up relations with the central government.

On the other hand, Moscow benefits from dealmaking with individual factions rather than a united group seeking centralization. The opposition delegation at Astana emphasized the point at the talks, noting that Russia’s unilateral agreements with separate groups absolve pro-government forces of responsibility for violating the Astana treaties.

Col. Fateh Hassoun, the head of the Syrian opposition delegation, said at the final press conference after the talks that his team’s presence at the negotiating table did not mean the members accepted all the agenda items, noting in particular objections to Iran’s activities and observer status.

Ayman Asimi, another delegation member, voiced concern about the Iran-backed militia in southern Aleppo, which, from his perspective, could tear up the Astana rulebook. The US State Department also expressed concern about Iran being a guarantor with a military presence. The United States sees Iran as a potentially disruptive force in the peace process.

Generally speaking, details of the guarantors’ Idlib strategy remained unclear, as no documents had been issued except the joint communique. Previously, some Turkish media outlets had said that Turkey and some opposition groups were going to work to establish a buffer zone 35 kilometers (22 miles) deep into the Idlib province, adding that Ankara had already begun redeploying its troops to the adjacent area of Hatay province. As of now, experts on Syria are closely examining the scenario of dividing Idlib into three parts: a Turkey-administered buffer zone, a de-escalation zone controlled by the cease-fire guarantors and a buffer zone where HTS will be compelled to disband.

Russian pundits realize that al-Qaeda’s experienced jihadis, relying on the global jihad strategy, were skillful at making the HTS economic and military presence possible in Idlib. If illegal supply lines are choked off at the Syrian-Turkish border, depriving militants of income, then under the strategy, a heterogeneous group that’s been formed for short-lived benefits rather than ideological reasons, may disband.

Meanwhile, Yasser Abdul Rahim, the military commander of Faylaq al-Rahman, said, “Neither we nor our Turkish allies intend to fight against Hayat Tahrir al-Sham.” He added, “Media reports about imminent military actions are aimed at driving another wedge between factions.”

Another subject that will need to be addressed is the Kurdish issue, which has fallen on deaf ears at the Astana talks. Lavrentyev stressed its great importance for Syrian conflict resolution, noting, “The factor will be definitely examined in the upcoming sessions.” On Sept. 6, Russia’s Defense Ministry publicly announced it had established a buffer zone in Tell Rifaat to minimize clashes between the Free Syrian Army and Kurdish militiamen. The zone also may be an attempt to ensure that disbanding HTS remains the priority in the area, rather than Turkey’s long-held ambition of weakening the Afrin-based Kurdish People's Protection Units.

Moscow seeks to both engage Kurdish forces in efforts to politically settle the Syrian crisis and to make them less resistant to the regime. Russia’s Foreign Ministry stays in contact with the Kurdish National Council in Syria, as well as with the Kurdish nationalist Democratic Union Party. However, Russian diplomatic activity alone is not enough to build a trust-based relationship between the Russians and the Kurds, which the Kremlin understands well.

A Russian intelligence-linked source told Al-Monitor on condition of anonymity that in recent months, Moscow has been trying to extend its contacts with Kurds via some representatives of the Yazidi diaspora in Russia.

“Although the background of these people is virtually ‘quasi-criminal,’ they are believed to be linked to some influential figures in Kurdistan, and that could be potentially helpful,” the source said.

With the key actors rallying to the cause of short-term conflict resolution, Moscow has begun to subtly focus less on ensuring the regime’s survival and more on advancing its own interests on a regional scale.