The new round of Syria talks in Kazakhstan produced a cease-fire in Idlib and the promise for a constitutional committee due to be announced in September, but will all of this ultimately happen? 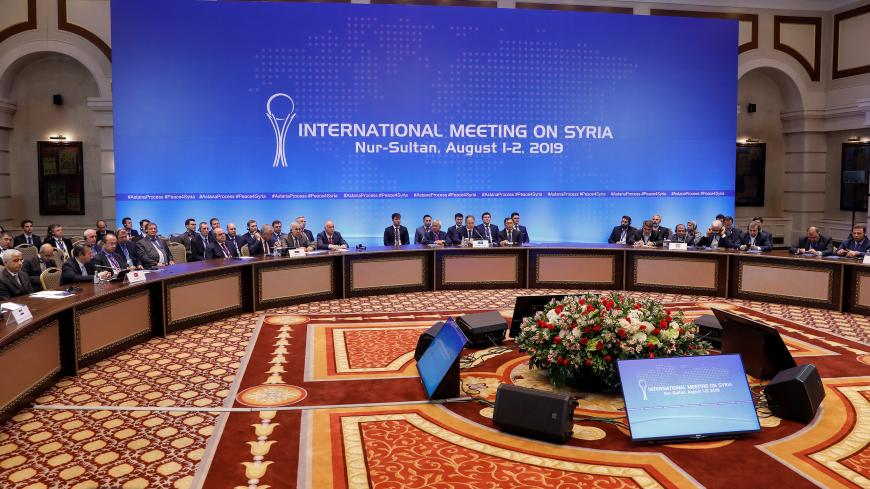 The 13th round of Syria talks in the capital city of Kazakhstan mostly brought optimism, even though the final communique did not appear to report any breakthroughs. Al-Monitor attended the event in Nur-Sultan (previously known as Astana) and examined the text of the communique.

The final communique states that the negotiators discussed the idea of holding an international conference on humanitarian assistance to Syria.

Russia’s special envoy to Syria, Alexander Lavrentiev, made it clear in an interview with TASS that the initial reconstruction of the country, including basic infrastructure such as energy and water facilities, schools, hospitals and administrative buildings, is intended.

“We understand that it requires funds, so we hope to engage leading world powers and international organizations, including nongovernmental ones, which can assist in the matter,” he said.

Moscow hopes to see the conference take place in October or November, yet it is unwilling to give specific dates. So far, Russia has failed to garner broad support to secure funds for Syria’s reconstruction. Thus, the event is unlikely to bring together an array of participants. In an interview with Kommersant newspaper, Lavrentiev said that most countries were worried about possible American sanctions. Nevertheless, should the creation of the constitutional committee galvanize the political process, the expectation in Moscow is that the situation may change.

A number of solutions on Idlib constitutes the most important outcome of the talks in Kazakhstan.

Weary of waiting for Ankara to meet its commitment to separate between terrorists and the armed opposition in Idlib, Moscow decided to put its hand to the plow. Interestingly, it embarked on it in a quite surprising way, lending a helping hand to the armed opposition in its fight against terrorists. Apart from this, Russia stepped up its efforts to sow seeds of discord among opposition members. Syria’s announcement of the Idlib cease-fire came as yet another surprise, albeit carefully arranged.

The final communique states: “While deploring civilian casualties, they [Russia, Iran and Turkey] agreed to undertake concrete measures based on the previous agreements on civilian protection in accordance with international humanitarian law, as well as the safety and security of the guarantors’ military personnel present within and outside the Idlib de-escalation area.”

What remains unmentioned in the document is by far more interesting.

On the first day, the delegations of the three Astana guarantors conferred until nearly midnight. During the talks, chat rooms and social networks — primarily the ones associated with the opposition and later the ones linked to the “Iranian mediators” — circulated information on cease-fire agreements. Lavrentiev was generally expected to announce the news at the regular briefing. But just minutes before the press conference, Syrian state media cited a military source to report that a cease-fire agreement on the Idlib de-escalation zone was reached.

The cease-fire depends on the parties' adherence to the Sochi memorandum signed by Russia and Turkey in September 2018. Among other matters, it stipulates that the opposition retreat 15-20 kilometers (12.5 miles) “deep in the de-escalation area,” as well as the withdrawal of heavy- and medium-caliber weapons. Since the communique did not specify the parties to the agreement or its duration, two speculative theories emerged on the sidelines of the Astana talks. The first theory implied secret security talks between Damascus and the Turkish military. The second theory assumed that the decision to push the opposition deep into the de-escalation zone and withdraw all weapons was an act of preemption by the Syrian government. Damascus ostensibly sought to demonstrate its flexibility and shift responsibility for the developments in Idlib to the armed opposition and Turkey, which had also striven for a cease-fire but wanted to promote their own terms.

Bashar Jaafari, Syria’s envoy to the United Nations who headed the government delegation in Nur-Sultan, corroborated the second account.

“This is a test for Turkey,” he told journalists in Kazakhstan, stressing that the cease-fire was linked to the Astana talks.

Shortly after the news was announced, Lavrentiev told reporters that the three delegations had not focused on the terms of the cease-fire during the talks.

“Naturally, the issue of a cease-fire or of an implementation of a temporary truce was not specifically discussed," he said. "We addressed stabilization in the Idlib de-escalation zone and measures to further fight against the remaining terrorist groups and to spur the moderate opposition into regaining control over this part of the territory.”

At the same time, he welcomed Damascus' decision, which he described as “a goodwill gesture on the part of the Syrian government.”

“Now everything will depend on the opposition,” said Lavrentiev.

On Monday, the Syrian government resumed strikes on Idlib, breaking the cease-fire just days after it was reached.

Some sources in the Russian delegation told Al-Monitor that the Nur-Sultan talks spared no effort to see the initially unilateral initiative of Damascus evolve into a bilateral agreement between the Syrian government and the opposition. Ayman al-Asimi, the spokesman for the opposition delegation, told Al-Monitor, “There are preliminary agreements [on the subject matter],” with consultations to follow.

The Russian delegation met with the opposition on the second day of the talks. Abdul Hakim Bashar, vice president of the National Coalition for Syrian Revolutionary and Opposition Forces, told Al-Monitor that Russia had committed itself to exerting pressure on the regime. In turn, the opposition claimed that the bombing of Idlib had played into the hands of Jabhat al-Nusra terrorists.

“A truce must be concluded in Idlib in order to eliminate al-Nusra,” he said. Moscow largely agrees with this stance. However, Russia’s priority is different.

“No, we have not given any promises [to the opposition] and we cannot do so," said Lavrentiev. "However, we have made some specific proposals to establish contact, to assist in fighting terrorist groups, if necessary.” He added that the opposition took its time to consider the proposal.

Although Russian diplomats and the military word their statements carefully so as not to openly blame Turkey for the deterioration of the situation in Idlib, some disgruntlement over Ankara’s behavior can still be detected. Mind the statements about the smuggling of arms from Turkey to Syria and the unrestricted flow of terrorists from Idlib across Turkey to other countries, such as Libya.

While Russia is more cautious in its statements addressed directly to Turkey, Moscow is now ready to assist both Ankara and the opposition in moving away from the radicals, if possible, without Turkish mediation.

Importantly, the demarcation line between militants and the opposition has also been removed from the agenda. As Lavrentiev made clear, the question is straightforward and the choice is unambiguous: “Either you side with us or you are against us.” The Russian envoy praised the members of the Syrian opposition in Nur-Sultan for their constructive contribution and emphasis on a peaceful resolution to the crisis.

“We shall work further only with such people. We aim at helping them engage in direct dialogue with Damascus whenever possible,” he said at the press conference. The opposition delegation, however, is unlikely to be pleased with the praise as it has already became subject it to criticism for its dialogue with Moscow amid the Idlib bombing by Syrian and Russian air forces.

As far as the formation of the constitutional committee is concerned — something many expected to be the main outcome of this meeting in Kazakhstan — the participants expressed satisfaction with the progress toward and confirmed their readiness to facilitate the early convention of the body.

Although all the attendees emphasized the progress over finalizing the committee’s composition, the opposition delegation told Al-Monitor that it had yet to give the green light to the UN's special envoy for Syria, Geir Pedersen, over the final list of candidates tabled by Damascus, as well as some procedural matters. This, among other things, includes the government’s demand that the committee’s decisions would be made by a three-fourths majority. Besides, Khawla Mohammed Ali Matar, deputy special envoy, told Al-Monitor about the current disputes over procedural issues, with no further elaboration, and voiced hope that all the problems would soon be resolved. Speaking on this matter, Russia’s Lavrentiev noted that mutual understanding between Damascus and the UN had overshadowed the minor disagreements.

“We have always stressed that the opposition has and must have a voice, but not to such an extent that will hinder the creation of the constitutional committee,” he concluded.