The latest round of Syria talks between Russia, Iran and Turkey held in Russia's Sochi discussed important issues, but deadlocks remain. 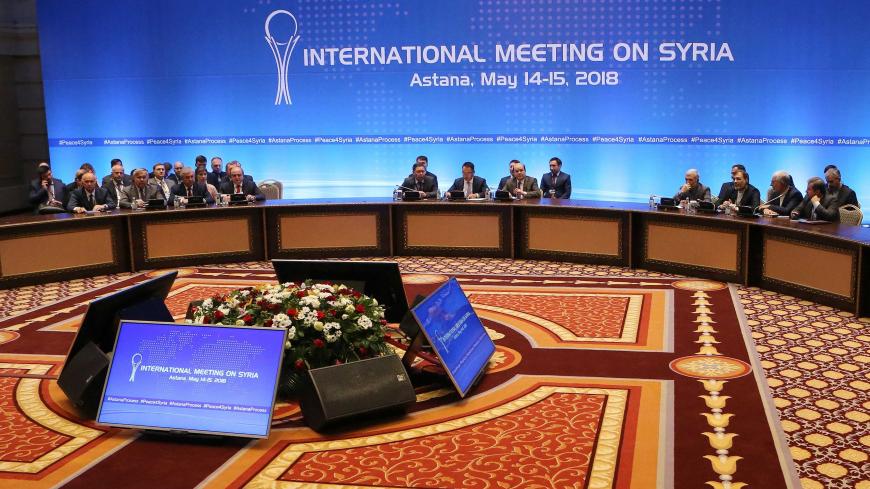 A general view shows Syrian regime representatives, opposition delegates and other attendees as they take part in the plenary session of Syria peace talks brokered by Iran, Russia and Turkey in Astana, Kazakhstan, May 15, 2018. - STANISLAV FILIPPOV/AFP/Getty Images

The 10th round of Syrian talks that recently took place in the southern Russian city of Sochi has officially become a continuation of earlier Astana-format meetings. Moscow argued the temporary relocation was an effort to embed discussions on humanitarian and political issues into an established format that initially had been designed only to enforce “cease-fire and trust measures” between Damascus and armed opposition groups. However, this is a mere diplomatic maneuver, since from the beginning the Astana agenda has contained such issues as constitution drafts, the liberation of hostages and access to humanitarian aid.

Astana is obviously exhausting itself as a “military issues format.” As the operations that the pro-regime forces conducted in three out of four de-escalation zones demonstrated, the “trust-building measures” have a distinctly aggressive, capitulation-oriented nature. Therefore, the guarantor nations — Russia, Iran and Turkey — attempt to pre-emptively navigate the negotiation process into the realm of politics and associate it with the results of the Syrian National Dialogue Congress in Sochi.

The only issue that prevents the Astana format from an ultimate meltdown is the fate of Idlib, the fourth de-escalation zone.

“One of the main issues on the agenda" was whether the "military operation in Idlib takes place before the end of the summer campaign,” a source speaking to Russian state news agency TASS pointed out. By the end of the talks, this question still was not answered precisely, and the final statement of guarantor nations did not contain any arrangements on Idlib. Representatives of all delegations also avoided making any substantive comments on the issue.

On one hand, Bashar Jaafari, the head of the Syrian government’s delegation and Syria’s ambassador to the United Nations, said that “the de-escalation zones are supposed to function for a limited period of time,” indirectly proving Free Syrian Army Brig. Gen. Ahmed Berri’s claims that the Idlib agreement expires on Sept. 19. Jaafari pointed out that Turkey violated the agreement by deploying its “armed forces, tanks and armored vehicles” in the area instead of police officers with light weapons that Ankara was supposed to have sent.

“Syrian people have a legitimate right to reclaim all the territories Turkey has occupied,” Jaafari added.

On the other hand, Alexander Lavrentiev, Russia’s special envoy for Syria, said that a large-scale operation in Idlib is unlikely.

“That is why we encouraged the moderate opposition to actively cooperate with Turkish partners and with Russia — to prevent any danger both for Russian soldiers of the Khmeimim air base and for Syrian government forces staying on the line of contact. In this case, we will not have to engage in full-blown fighting against militants,” Lavrentiev said.

Lavrentiev added that Russian soldiers had played a role in the creation of a humanitarian corridor for civilians to leave Idlib. According to Lavrentiev, this was motivated not by an intent for a future assault but rather by the refugees striving to return to their hometowns.

Ahmed Tomeh, the leader of the Syrian opposition’s delegation, said that the Russian diplomat’s words about the Idlib situation were inspiring. However, at the same time, Lavrentiev’s statement does not deny the possibility of a smaller-scale operation in the de-escalation zone. Later, in his interview with TASS, Vladimir Putin’s special envoy pointed out that Idlib “is infested by numerous radical elements that have a negative impact on the situation as a whole and on the moderate opposition in particular.” He stressed that “Russia’s own patience may eventually too have run thin.”

As Alexander Kinschak, Russian ambassador to Damascus, said earlier, the Idlib problem should be resolved the way the hostilities in the southern de-escalation zone had been settled, noting all the complications should be approached “carefully, tactfully and discreetly.”

The diplomat probably meant that in the southwest, several factions of the opposition stayed in their previous locations after having given up their heavy and medium-range weapons, while other groups even joined the 5th Assault Corps traditionally led by Russian commanders. Moreover, Adham al-Akrad, the ex-leader of the Free Syrian Army (FSA) faction in Daraa province, issued the list of conditions for the project of re-integration of former rebels into the official system under Russian guidance.

It is not clear though whether the regime’s security services are willing to follow those agreements earnestly since the southwest has long been the territory of the FSA’s influence, and the opposition there is much less diverse than that in Idlib.

At the same time, the pro-government forces carefully, tactfully and discreetly continue to concentrate around Iranian observation posts in the Idlib area while moderate opposition leaders have merged into a unified structure — with Turkey’s support. Sources in the opposition claim the militants may surrender Jisr al-Shughur and several districts of northern Hama without resistance, but Ankara is unlikely prepared for large-scale losses.

Beyond Idlib, the Sochi discussions focused on other issues as well. The “Astana 10” also hosted the fourth meeting of the action group on prisoner and hostage liberation in which experts from guarantor countries, the UN and the International Committee of the Red Cross took part. Staffan de Mistura, the UN’s special envoy for Syria, provided the representatives of the guarantor countries with a preliminary list of candidates for the Constitutional Commission of Syria and an instruction on the legal methods by which they should be appointed.

“Now we discuss the third critically important group of candidates — the delegation of the civil society,” Lavrentiev specified.

The consultations regarding the creation of the UN-supported Constitutional Commission in Geneva are supposed to take place in early September.

Also in September, Russia, Turkey, France and Germany are going to participate in a summit following Turkish President Recep Tayyip Erdogan’s suggestion. The meeting will also be dedicated to the Syrian conflict resolution with a focus on the return of refugees and hopes that France and Germany may play a constructive role in the process. The reasons behind Russia’s own motivation to support the meeting are easy to understand. The Syrian regime supported by Russia will impose its own conditions of reconstruction on the countries bearing the expenses to host Syrian refugees in exchange for accepting them back.

Alexander Shumilin, senior research fellow at the Institute of Europe of the Russian Academy of Sciences, said Assad’s success on the battlefield provided Moscow with a space for political and humanitarian maneuvers, “considering that every victory the regime achieves brings new humanitarian problems to the stage.”

“As a result, although the West did not change its principled position on Assad’s regime, Western politicians are currently more willing to cooperate with Russia in humanitarian aspects,” Shumilin added.

It is far from certain, however, that the West is ready to invest in the reconstruction of Syria as long as political reforms in the country remain superficial. American representatives were not the only ones who have refused to discuss political resolution anywhere but in Geneva and thus avoided the summit in Sochi. Filippo Grandi, the UN High Commissioner for Refugees, also didn’t attend the Sochi meeting. Russian Kommersant newspaper reports that the Russian delegation had eagerly expected him to attend. Instead, Grainne O’Hara, senior protection officer of the UNHCR, visited.

The next round of the Astana negotiations is supposed to take place in November. If the sides of the conflict are really willing to establish the long-term functioning of the Idlib de-escalation zone — the reconstruction of which is likely to attract the investments of Western nations — three and a half months are a sufficient period of time to succeed. However, it is highly uncertain whether Damascus manages to coexist peacefully with an alternative power center, seeing that the time gap before the next round of the Astana process is enough to prepare and even launch a new military operation. It will complicate the situation even further, but the Syrian regime will be able to demonstrate its independence, which it painfully lacks.