Moscow and Ankara seem to share some common goals regarding Syria, but don't necessarily agree on how to reach them. 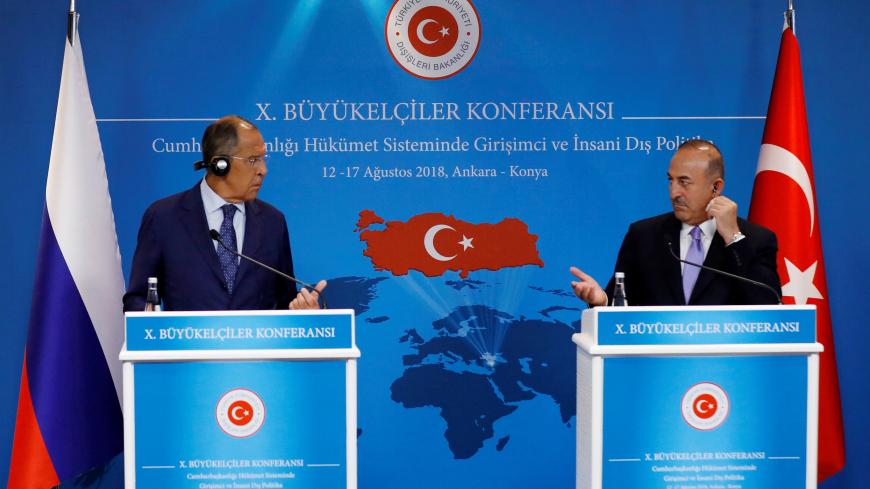 Russian Foreign Minister Sergey Lavrov met Aug. 14 in Ankara with his Turkish counterpart, Mevlut Cavusoglu, with Syria dominating the agenda, largely against the backdrop of a planned Sept. 7 meeting of the leaders of Russia, Turkey, Germany and France in Istanbul.

The close dialogue on Syria between Turkey and Russia has grown even stronger due to US sanctions on the latter two nations. Lavrov has said Americans are trying to derail the Astana, Kazakhstan, peace process and bring Turkey to their side. The sanctions, however, are undermining the US efforts.

A Lavrov-Cavusoglu press conference in Ankara revolved around two main issues — the US sanctions and the situation in Syria. Both topics seem inseparably intertwined.

The ministers’ meeting took place against the background of the United States imposing sanctions on Russia, Turkey and Iran almost at the same time. All three countries cooperate on the Syrian problem within the Astana format, so journalists covering the meeting wanted to know seriously the sanctions would influence the crisis in the region, particularly the coordination on the Syrian dossier and Russia’s efforts to determine how to deal with all the Syrian refugees. Both ministers condemned the US sanctions. Lavrov pointed out, however, that he doesn't think the sanctions are directly connected to the Syrian crisis. He believes the West, and particularly the United States, "want to prevent the Astana process from achieving actual results and aim to portray it as a failure.”

“They have already made those attempts previously, and will probably keep doing it,” he said.

Washington has indeed been trying to win Ankara over, considering that Turkey’s government had criticized Damascus for conducting military operations, supported by the Russian army, in the de-escalation zones established within the Astana process. The Astana unity became especially fragile when Turkey joined the United States and European nations in their position on the chemical attack in eastern Ghouta.

In his April testimony before the House Foreign Affairs Committee, the US assistant secretary of state for European and Eurasian Affairs, A. Wess Mitchell, said America's aim "is to enlist Turkey as a more active ally in supporting the Geneva process," defeat the Islamic State, achieve "lasting stabilization in Syria, [and thwart] expansion by Russia and Iran.”

Yet the Astana format remained in place, even when Washington and Ankara reached an agreement on Syria’s Manbij. It's even stronger now that the sanctions have been imposed, but the big difference is that now Ankara and Moscow are each trying to get Western countries on their side.

This is the perspective from which we may look at the Istanbul summit Sept. 7. Turkish President Recep Tayyip Erdogan in late July suggested the meeting. He aims to gather the Astana-format nations (Russia, Turkey and Iran); Germany, which suffers from a flood of refugees; and France, which represents the “small group” on Syria (also including Britain, the United States, Jordan and Saudi Arabia) around the same table.

The “small group” does not play any significant role on the ground. To be precise, these processes are discussed in other bilateral and trilateral formats that don't include France and Britain. However, this is only true regarding the actual fighting. Reaching a political solution in Syria will require joint efforts from all the foreign parties considered to be the mediators of the conflict — particularly the permanent members of the UN Security Council.

There are still far too many disagreements over Syria’s future, and one of the controversies is the fate of the refugees. Russia assumes the war on terror is coming to a close now that the country is mostly under Damascus' control, and the devastation is the only thing preventing the refugees from returning home. Countries interested in the conflict's resolution should contribute to the reconstruction and help the refugees get back to a normal, peaceful life at home.

The UN and Western countries, however, have a different opinion.

Filippo Grandi, head of the UN refugee agency, has repeatedly said it is "premature" for refugees to return. "Syria is still very insecure; there’s still a lot of war going on in Syria,” he said Aug. 13 after meeting with Germany's foreign minister in Berlin. He also said, however, that he would visit Syria soon to evaluate the situation there.

Washington has also repeatedly claimed that a political resolution should be reached before refugees return. Moreover, Syrian armed militants are skeptical about Russian plans, as many people fled the country trying to save themselves not from terrorists, but rather from the regime’s repressions.

Lavrov was perplexed by Grandi’s words and the Western position.

Grandi's statement "seems to be quite strange if it was reported correctly. … If he actually made this statement, he is blatantly misinformed if not worse,” Lavrov claimed in Ankara. This issue will certainly become one of the main topics both for the Istanbul summit and talks between Russian President Vladimir Putin and German Chancellor Angela Merkel planned for Aug. 18.

Ankara's position on refugees is a middle ground between the West and Russia. On the one hand, Turkey wants refugees to leave its territory. On the other hand, though, the refugees would settle in areas of northern Syria controlled by the opposition Syrian National Army — which is being created under Turkish patronage.

As for Idlib, the prospect of the last de-escalation zone established within the Astana format — which still has not returned to Damascus’ control — may become a major challenge for the Russian, Turkish and Iranian alliance. In late July, Syrian President Bashar al-Assad said Damascus plans to re-establish control over the entire Syrian territory, and declared Idlib a priority area.

Two weeks earlier, Erdogan had warned Putin that an attack on Idlib would create a humanitarian crisis and could end the Astana agreements.

Moscow is yet again forced to seek a decision acceptable for all sides, even though it ultimately favors the same scenario as Damascus: the entire territory of Syria unified under the same authority. However, not wanting to confront Turkey, Russia is quite sensitive to the Syrian government's attempts to approach the problems with a hammer.

During the latest round of Astana talks, held in late July in Sochi, a source close to the Russian delegation told Al-Monitor not for attribution that the delegation’s members were displeased by lead Syrian representative Bashar Jaafari's public condemnation of Ankara.

Judging by the statements Lavrov and Cavusoglu made during their press conference, Ankara and Moscow have achieved a basic mutual understanding on Idlib, although some controversial points remain. The main one is how to separate terrorists from the opposition forces loyal to Turkey. One principle of the Astana process is that participants must be willing and able to reach a compromise. In Ankara, Lavrov emphasized once more that the groups unable to negotiate can be considered a legitimate target for the Syrian army.

Alexander Lavrentiev, Putin's envoy for Syria, had explained earlier that Moscow would be content even if Turkey and loyal opposition groups do away with everyone refusing to negotiate. In particular, this includes Hayat Tahrir al-Sham and its most radical elements — such as former Jabhat al-Nusra militants — yet even they can be invited for a dialogue in certain situations.

“If some of them come to their senses, they are welcome," Lavrentiev said.

Turkey, in turn, agrees that the opposition and the terrorists should be distinctly separated from each other, but Cavusoglu stressed that Idlib cannot be bombed under the pretext of fighting against terrorists.

However, the most important issue isn't what Lavrov and Cavusoglu said, but rather the topic they didn't address in public: Who, exactly, should control Idlib? The answer will surely affect the Syrian rebel groups' willingness to negotiate.