The name of the venue for the Syria peace talks may have changed from Astana to Nursultan, but the challenges the participants faced were familiar ones. 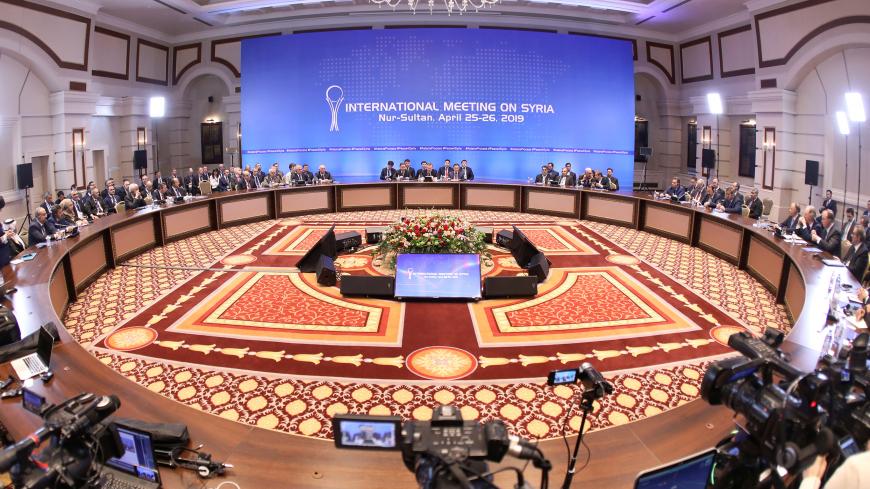 The 12th round of “Astana” peace talks on Syria took place in Nursultan, the newly renamed capital of Kazakhstan, April 25-26. Although the venue of the talks had a new name, the challenges the participants faced remained the same.

In addition to representatives from Russia, Iran and Turkey, the three guarantor states, also in attendance were Geir O. Pedersen, special envoy of UN Secretary-General António Guterres, and delegations from the Syrian government and the Syrian opposition.

Sources privy to the talks who spoke to Al-Monitor on the condition of anonymity said that the parties had disagreed on what should take priority on the agenda. While Tehran and Damascus insisted on exploring ways to address the situation in Idlib province, which is still controlled by rebel forces, Ankara and the Syrian opposition sought to focus primarily on a prisoner swap and the situation in the northeast and adjacent areas, where the Kurds hold sway. Meanwhile, Moscow deemed it important to finalize a list of members for a constitutional committee.

In light of these dynamics, no breakthrough was achieved in addressing any of the issues, but interests did converge on one particular item — criticism of the United States. Astana 12 may go down as the most anti-American of the talks.

The final communique of the 12th round opens with strong condemnation of the US decision to recognize Israeli sovereignty over the Golan Heights, captured from Syria in 1967, calling it a “grave violation of international law, particularly the UN Security Council resolution 497, [that] threatens peace and security in the Middle East.”

Alexander Lavrentiev, head of the Russian delegation, emphasized the position of the Astana trio, stating, according to Sputnik News, “One must observe international law and UNSC resolutions rather than take unilateral measures.” He added, “We consider the US actions erroneous, and we hope that the US administration and Donald Trump himself will correct them.”

The communique also put US policy toward the Syrian conflict in the crosshairs. The guarantor states “rejected all attempts to create new realities on the ground under the pretext of combating terrorism and expressed their determination to stand against separatist agendas aimed at undermining the sovereignty and territorial integrity of Syria as well as the national security of neighboring countries.”

The document, without naming names, is referring to Washington’s support of the predominantly Kurdish Syrian Democratic Forces (SDF). Lavrentiev later remarked that the current developments on the eastern bank of the Euphrates River, where the SDF controls territory, “raise many questions.”

The Russian representative further stated, “In a strikingly inconsistent move, the Americans announced the withdrawal of their troops only to keep a large military contingent at the Euphrates River. We once again highlight Syria’s unity and integrity. We will stand against any attempt to carve up Syria.” Lavrentiev also referred to ongoing work to establish a “constructive dialogue” between the Syrian government and the Kurds and Arab tribes residing east of the Euphrates. The guarantor states agreed to convene later for a separate meeting to discuss the situation in the northeast.

Tass reported Russian Deputy Foreign Minister Sergey Vershinin saying how Moscow had hoped to move ahead with the constitutional committee at the 12th round. It appeared, however, that Damascus continued to drag its feet about embracing such an initiative. Shortly before the Nursultan meeting, Riyad Haddad, Syria's ambassador to Russia, told the parties that it was too premature to say whether such a plan would be feasible. Even Iran acting as an intermediary between Turkey and Syria failed to move efforts forward on forming the constitutional committee. As the talks failed to produce a list of committee’s members, it was decided to hold another round of consultations in Geneva.

Yahya al-Aridi, spokesperson for the opposition Syrian Negotiations Commission, which sent delegates to the 12th round of talks, blamed President Bashar al-Assad's regime for the stalemate. “The regime in particular is obstructing the formation of the constitutional committee in accordance with UN resolution 2254,” Aridi said to Arab News. “The regime gets support from Iran in creating hurdles.”

Aridi further complained, “Russia seems to consider itself a substitute to the UN, when in fact the UN should be the one in charge and the facilitator of negotiations and implementing (resolution) 2254.” The Security Council resolution, passed in 2015, calls for a cease-fire and a political settlement for the conflict.

The lack of progress in forming a constitutional committee is linked to the Syrian regime's dissatisfaction with developments concerning the Idlib de-escalation zone, where the moderate opposition groups have agreed to a cease-fire, but extremist groups have not, and where Turkey has thwarted every attempt to launch a military ground operation without offering concessions.

Prior to the 12th round of negotiations, the Syrian government delegation had held consultations with Russian and Iranian representatives and emphasized the priority of taking Idlib. It is noteworthy that the round of negotiations took place amid ongoing Russian and Syrian air strikes in the de-escalation zone against Hayat Tahrir al-Sham, which controls most of Idlib, and with regime forces and the extremists trading artillery fire. The communique emphasized the need to implement agreements for coordinated Russian-Turkish patrols in the demilitarized zone and for the Joint Iranian-Russian-Turkish Coordination Center.

It is becoming increasingly difficult for Russia to sustain the uneasy balance between its Syrian and Turkish partners as concerns Idlib province, which remains central to a settlement. Russia has raised the issue in the UN Security Council. Vladimir Safronkov, Russia's deputy permanent representative to the United Nations, has indicated that the status quo in Idlib is not viable because militant attacks against government forces are being launched from there.

“We cannot say for how long this status quo in Idlib can last,” Newsweek reported Safronkov stressing. “It is not viable at all, on the contrary: it is dangerous for Syria and the region.”

Absent any genuine progress in addressing the situation in Idlib, it will be difficult to advance on the peace process and in other areas. That said, options and the outline of a Russian-Turkish deal on Idlib could soon be worked out.

One positive aspect of the 12th round meeting is a decision to continue the mutual release of detainees and prisoners, as occurred in November 2018, February and April 2019. The communique noted, “These operations constituted [a] unique and important contribution of the Astana format to building confidence between the Syrian parties and creating necessary conditions for advancing the political process.”

Also of note, observer status was granted to Iraq and Lebanon at the 12th round of talks. The Syrian opposition welcomed the new, expanded format with observer states when Jordan, along with the United States, became observers. The inclusion of Iraq and Lebanon, however, concerns some that the balance might now tip in favor of the Syrian regime and Iran in the talks. It is difficult to say whether the participation of the three observers from the region will be a mere formality or have a meaningfully effect on the Astana forum.