The formation of the Syrian Constitutional Committee has been mired by disputes and delays, though this stalling could be beneficial to Moscow and the Syrian government. 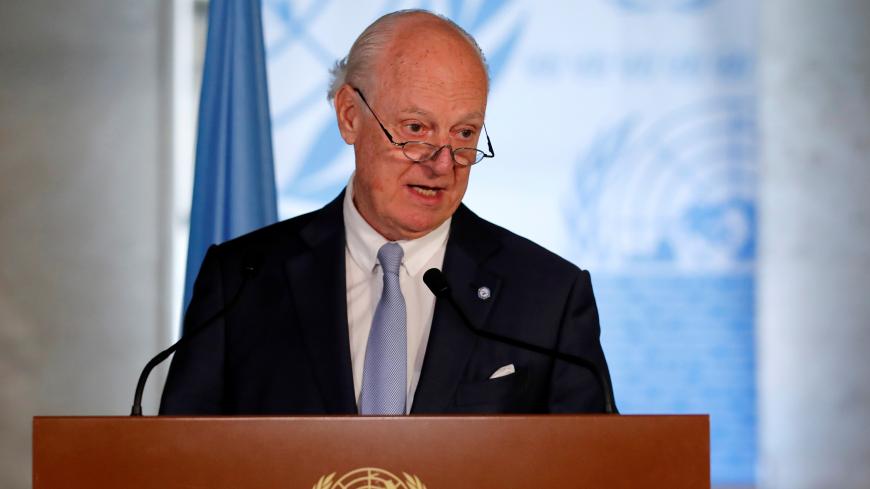 High-level representatives of the three countries involved in Syria talks in the Kazakh capital of Astana — Russia, Iran and Turkey — have taken part in a two-day session in Geneva this week dedicated to the political resolution of the Syrian conflict. The delegates discussed with the UN special envoy for Syria, Staffan de Mistura, the formation of the Syrian Constitutional Committee. The countries had reached an agreement to form the committee in January during the Syrian National Dialogue Congress in Sochi.

Alexander Lavrentiev, Russian President Vladimir Putin’s special envoy for Syria, summed it up this way: Moscow expects the last stage of discussion on the committee to take place in mid-July, during a separate meeting in Geneva. Lavrentiev also mentioned that Moscow and Ankara have been in constant contact over Kurdish participation in the constitutional committee, in which the Kurds will eventually be represented.

“The Kurds will take part in the Syrian Constitutional Committee anyway," Lavrentiev said. "Their representatives will be included in every faction: opposition groups, the government’s delegation and civil society. We ask everyone to abstain from dividing the Kurds into pro-Turkish, pro-Russian or PYD [Democratic Union Party] and YPG [People's Protection Units] categories, the latter of which is viewed negatively in Ankara.”

In his efforts to revive the stalled Geneva talks, de Mistura spent the last month in numerous consultations. On June 6, he visited Istanbul, where he met with Turkish government officials, as well as Syrian opposition leaders from the Syrian High Negotiations Committee and National Coalition for Syrian Revolutionary and Opposition Forces. On June 9, he visited Tehran, and on June 11, he visited Egypt. The constitutional committee, which should generate and propose ideas for the country’s new constitution, will consist of 150 members. Of the 150 members,100 will represent the government and moderate or “internal” opposition, and 50 will represent the so-called external opposition. De Mistura, however, would like the committee to be limited to no more than 50 members total.

Moreover, UN talks with ambassadors of the United States, Great Britain, France, Germany, Jordan and Saudi Arabia are scheduled for June 25 in Geneva. It is clear that de Mistura is attempting to bridge opposing sides of the conflict under the UN flag. According to Lavrentiev, Russia is ready to consider “reasonable proposals” from the United States, Germany and other countries in that "camp."

Many Russian experts privately agree that Syrian President Bashar al-Assad’s decision, made during his visit to Sochi in May, to send a part of the delegation to the constitutional committee can be seen as a compromise. Syrian regime officials have previously said the creation of the constitutional committee should be officially approved by Assad and that Damascus “will not accept any committee formed without the decision of Syrian government.” However, it is not certain whether this compromise is actually that extensive.

Damascus has already presented its own list of 50 delegates, in which members of the Baath Party and the Syrian People’s Congress have a majority. Syrian Foreign Minister Walid Moallem reacted negatively to the news, though he previously said, “The government should comprise the majority of the [constitutional] committee, and every decision should be made unanimously.” Naser al-Hariri, the head of the Syrian High Negotiations Committee who boycotted the negotiations in Sochi, said that since the list is still being composed, no particular names or information about the committee should be discussed before their official presentation.

The Russian delegation held negotiations in Geneva with three Syrian dissident movements that participated in the Sochi congress, represented by: Qadri Jamil, leader of the so-called Moscow platform; Ali Jarba, brother of Ahmed Jarba of Syria’s Tomorrow Movement; and Haytham Manna of the National Coordination Committee for Democratic Change. Jarba, as well as the Moscow opposition platform, claimed their places in the constitutional committee and sent their lists to de Mistura. Meanwhile, they await the publication of the list made by the Syrian Negotiation Commission, the joint institution created after the Riyadh II opposition conference.

Syria’s Tomorrow Movement — the Cairo-based opposition political party — had already mediated talks between Russia and opposition factions. The talks were dedicated to reaching additional agreements on the eastern Ghouta and northern Homs de-escalation zones, which have virtually ceased to function. Moreover, the movement sent 53 of its delegates to the congress in Sochi. Yet the movement’s militants — the Syrian Elite Forces — fight autonomously in the eastern part of the country. The troops are not included in the Syrian Democratic Forces, and they have even fought Kurdish groups several times.

However, Yahya al-Aridi, the spokesman for the opposition delegation, spoke out against opposition participation in Geneva talks. He said that when some dissident parties claim they will go to Geneva, it actually means that “Russia can define the opposition at its own discretion." According to Aridi, everything happening now in northern and southern Syria is evidence that various outside forces are expropriating Syrian land and turning away from people suffering under “the system of tyranny.”

Ahmad Toma, the head of Syrian opposition’s delegation in Astana, said Turkey is the only guarantor eligible to present the list of dissident delegates. He added that the intentions of some other opposition parties to send the list of names directly to de Mistura is a “manipulation.” That said, a member of the Cairo platform dismissed the idea that the opposition’s list should pass through the hands of the “Turkish guarantor,” emphasizing that no one should be allowed to interfere with the constitution of Syria. In turn, Randa Kassis, the leader of the Astana platform of the Syrian opposition, which is loyal to the Syrian government, dubbed the presentation of the list “a childish daydream,” claiming that such a move was designed to expel her faction from the committee.

It is not clear how long it will take to form the committee and to discuss the final project of the constitution. More importantly, it is not clear whether the UN and the countries traditionally supporting the opposition even approve of these processes, as the committee may predominantly be made up of regime delegates and members of “tamed” opposition parties that have typically been loyal to the government.

Any stalling of the negotiations — whether in the form of actual or made-up arguments about Syria's constitution — is beneficial to Moscow and Damascus. Every action — imposing the cease-fire, creating the interim government, holding free and fair elections — formally follows UN Resolution 2254 and the Geneva Communique of June 2012, precisely defining a plan toward resolution. However, the reason behind the moves is actually being shrouded: Damascus gets more time to suppress the remnants of the opposition in the de-escalation zones, and inclusion of the “puppet dissidents” into the Geneva format supplies the regime with additional internal and external legitimization.

The project of the constitution, as proposed by Russia within the Astana format, was quite abstract from the beginning, providing merely a rough sketch of a future political system. Although Moscow immediately emphasized that the project was designed for inter-Syrian discussion, it is clearly aimed at preserving the current Syrian regime, for Russia’s benefit. Further actions on the ground, particularly the elimination of two de-escalation zones, confirmed that a project of this type will be inevitably used as a foundation for further actions. These actions can make it seem like there is stability in Syria, but the question is, for how long?