The Syrian opposition suspects Russia’s upcoming congress is a ploy to bolster the regime and dilute the United Nations’ influence. 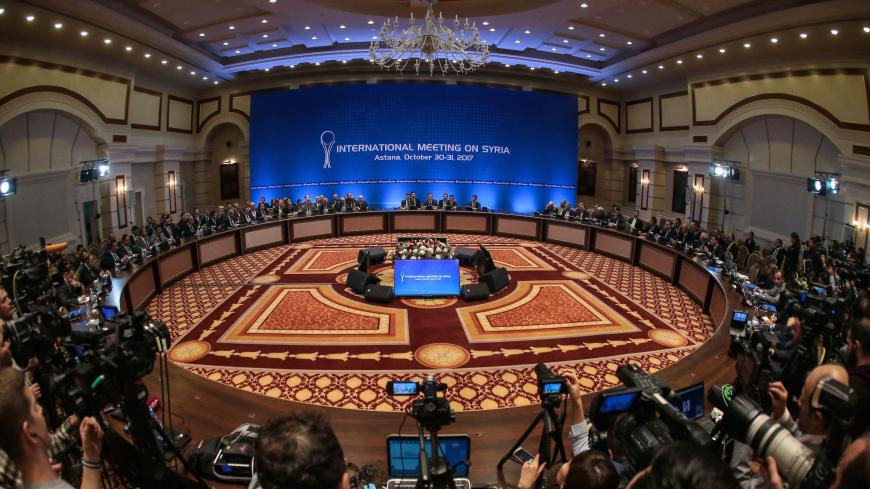 Representatives of the Syria regime and rebel groups along with other attendees take part in the session of Syria peace talks in Astana on Oct. 31, 2017. - GETTY/AFP/Stanislav Filippov

The seventh round of Syrian peace talks, held Oct. 30-31 in Astana, Kazakhstan, failed to produce meaningful agreements in practical terms. Not only that, but the participants’ final statements give the impression that Moscow is seeking to impose its own resolution of the Syrian conflict — not as a moderator, but as a party seeking the long-term survival of the regime of President Bashar al-Assad and securing it new legitimacy in the eyes of the international community.

The Syrian opposition delegation, led by the Free Syrian Army’s Ahmad Berri and represented by such factions as Jaish al-Islam, Ahrar al-Sham, the Sultan Murad Brigade and others, insisted that Assad comply with the cease-fire, especially in Eastern Ghouta; free prisoners of war and withdraw pro-Iranian Shiite militias from Syrian territory.

In the runup to the Astana talks, Russian President Vladimir Putin’s special representative for Syria, Alexander Lavrentyev, expressed hope that this round of the negotiations would “make progress in freeing the captives and in humanitarian de-mining activities.”

Yet final documents on these very issues have never been adopted in Astana. Commenting on the results of the meeting, Lavrentyev said there will need to be additional talks between Damascus and the opposition to adopt the documents. In other words, the negotiators failed to agree on the main stated subjects. Yet as Deputy Foreign Minister of Iran Hossein Jaberi Ansari said, the issue of the prisoner swap has been on the agenda since the fourth round of talks.

A source in Russian intelligence, which discreetly oversees the talks in Astana from the Russian side, told Al-Monitor, “Over the course of the war in Syria, Damascus and the militant opposition have been independently clinching deals with one another on the release of prisoners, but neither party is willing to concede on this issue within the [more public] Astana forum, so as not to demonstrate weakness.” Opposition member Fateh Hassoun said a potential swap “was obstructed by the Assad regime and Tehran” and asked Kazakh President Nursultan Nazarbayev, who hosted the talks, to intervene in a future negotiation of humanitarian issues.

A final joint statement by the mediating parties — Russia, Iran and Turkey — is barely different from the previous round's document. Probably the only difference is an agreement to hold an all-Syrian National Dialogue Congress.

As Al-Monitor previously reported, Putin brought up the new Russian initiative on the Syrian conflict at a Valdai Discussion Club think-tank event Oct. 19. Initially, the congress was scheduled for Nov. 7-11 at the Russian Khmeimim air base in Syria. Later, the date and venue were changed to Nov. 18 at the Russian southern resort city of Sochi.

Lavrentyev told RIA Novosti media that the location was changed for security reasons.

The Russian Foreign Ministry first published a list of the 33 invited organizations — “political movements, parties and unions,” including the ruling Baath Party, other Assad-loyal parties, Kurds, and militant and “puppet” opposition groups.

Lavrentyev mentioned the main topics at the upcoming congress will include constitutional reforms and election preparation. He also didn’t rule out that the issue of a “government of national unity” in Syria could be raised. According to the Russian envoy, Moscow believes the Syrians should determine a concrete timeline for parliamentary and presidential elections, but three to six months before this they would have to agree on and adopt a constitution.

Representatives of other opposition groups who had said from the beginning they wouldn’t attend the congress if it were held in Latakia, Syria, weren’t happy with the new venue, either. Mohammad Alloush, a member of the opposition’s High Negotiations Committee and a senior official with Jaish al-Islam, said the congress amounts to a meeting “between the regime and the regime.”

Yahya al-Aridi, an opposition spokesperson, called the congress “a violation of international law and the previous agreements reached in Geneva.” He added, “The Astana process showed at one point that it was a misleading platform in that it devalued the Geneva format. We believe the Sochi congress follows the same pattern.”

Are the Syrian opposition concerns legitimate? To determine this, one needs to look at the list of those groups Russia wants to attend the congress. More than half of them are based in Damascus and by definition have ties with either Russian or Syrian intelligence services. This “decorative opposition” would be having an equal say with real rebel factions, while only echoing the interests of the current Syrian government.

Lavrentyev took a hard line with the opposition. Noting opposition members’ reluctance to attend the Sochi congress, he said, “They have to attend by default.” He also said that if they demand preconditions for their participation, Moscow will see it as “a sign of refusal to accept a helping hand stretched out to them in their pursuit of an exit from the Syrian crisis.” Some Syrian opposition media interpreted the message to mean that those unwilling to come to Sochi will be marginalized, and that the congress is an attempt to reduce the UN’s influence in negotiations as well.

In addition, the National Coalition for the Revolution and Opposition in Turkey, which is associated with the High Negotiations Committee, said the Sochi congress is a Russian effort to circumvent “the international desire for political transition” in Syria, The Guardian reported Nov. 1.

“The coalition will not participate in any negotiations with the regime outside Geneva or without UN sponsorship,” a coalition spokesman said, according to the newspaper.

Such marginalization could indeed happen, given the view Moscow has of the situation in Eastern Ghouta. Russians characterize the state of affairs in the area as “satisfactory,” while blaming the occasional provocation on Hayat Tahrir al-Sham and even Islamic State militants. Such attempts to publicly shield Damascus look ambiguous. Regime forces have been reluctant to make peace with a large and strong opposition enclave near Damascus and have been constantly attacking Jaish al-Islam and Faylaq al-Rahman — which even pro-Syrian government forces recognize.

UN representatives have long been pointing to the grave humanitarian situation in Eastern Ghouta. While humanitarian convoys were allowed into the territory shortly before the beginning of this round of the Astana talks, government shelling of the opposition positions continued during the negotiations.

Therefore, the Syrian opposition has every reason to presume that Moscow’s new diplomatic initiative intends to put “real” and “puppet” opposition groups on an equal footing to strengthen the Assad regime. It’s still unclear how success-emboldened Damascus — which can barely agree with the opposition on releasing captives — can agree on a new constitution within a few months. It’s even more doubtful that it will be possible at this stage to hold elections in Syria without a strong hand guiding the outcome.

The next negotiations are scheduled to take place in Astana in the second half of December. Hopefully, this format — which, by and large, helped freeze the situation in western Syria — will ultimately be built into the Geneva format with no alternative parallel platforms.