Syrian opposition can win, as long as it agrees to lose

The Syrian regime appears to hold the trump cards in negotiations this week with the opposition delegation in Geneva. 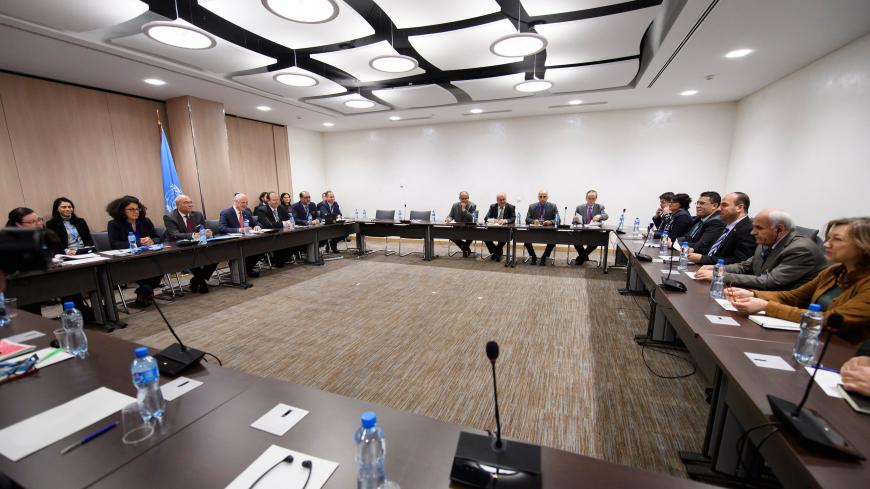 A general view of a meeting of intra-Syria peace talks with the Syrian Negotiation Commission delegation and UN Syria envoy Staffan de Mistura, prior to a round of negotiations, at the European headquarters of the United Nations in Geneva, Switzerland, Nov. 29, 2017. - REUTERS/Martial Trezzini

Syrian government representatives arrived in Geneva on Nov. 29 — a day late — for the latest round of negotiations aimed at resolving the country’s civil war. The meeting began Nov. 28, but representatives of Syrian President Bashar al-Assad delayed their arrival reportedly until they were assured there would be no discussion of removing Assad from power.

The rebels, however, still insist any settlement must include Assad’s departure.

There are many, many cooks in the kitchen trying to serve up their own resolution to the nearly seven-year war. The United Nations is sponsoring the talks in Geneva — this is the eighth round — but related meetings have taken place in other locations.

Moscow is participating in the negotiations and has shifted its focus from military activities to finding and implementing a political resolution to the conflict. Russia hosted a trilateral summit last week in Sochi in an effort to calm Turkey and Iran after the United States and Russia agreed earlier in November that there is no military solution in Syria. Russia’s summit also allowed for a meeting of minds ahead of the Syrian National Dialogue Congress that Russia plans in Sochi. The congress is tentatively scheduled to be held sometime between Dec. 1 and Dec. 8, during the break between the first and second stages of the Geneva talks.

During those talks, the various opposition groups chose Nasr al-Hariri, the head of the opposition’s High Negotiations Committee, to lead them in negotiations. He had filled the same role at previous talks in Geneva and Astana, Kazakhstan.

The 36 opposition representatives at Geneva include eight from the Syrian National Coalition, five from the National Coordination Committee for Democratic Change, eight independent delegates, four each from the Cairo- and Moscow-based platforms, and seven from military factions.

Russian Foreign Minister Sergey Lavrov hailed Hijab’s resignation as “the retreat of radically minded opposition figures from playing the main role.” However, Hariri reaffirmed his stance that a transitional governing body should be established without Assad. Hijab also said Russia’s proposal to host the Syrian National Dialogue Congress in Sochi will not contribute to the political process, as talks on Syria should be organized under UN auspices

At first glance, one might expect the many separate summits and meetings to force Assad and the opposition to bring the armed conflict to an end. Arab and other countries have extended their seemingly warm welcome to Russia’s efforts — if the attempts are really aimed at reforming the system and preparing the ground for Syrian fair elections in the future.

However, the “if” matters most. Russia’s military intervention in the war in 2015 tipped the scales in favor of Assad’s regime, and Russia has strongly backed Assad's remaining in power. For these reasons, opposition representatives have said the upcoming Sochi congress amounts to “the regime negotiating with the regime.”

Also, many opposition representatives object to the inclusion in their ranks of what they call “puppet opposition” groups that are considered quite loyal to the regime and Syrian intelligence. Syria faced demonstrations against the groups’ participation in negotiations, as they have nothing to do with the Syrian revolution.

The Syrian regime has wielded considerable negotiating power at the Geneva talks as, on the one hand, it enjoys the support of Iran and Russia and, on the other hand, Syrian forces mounted successful military operations in eastern Syria. The regime quite clearly is ready to enter into a dialogue with the opposition and even take it back into the country — but only if the opposition agrees to abide by any conditions imposed by the authorities.

Regardless of all the divisions and disagreements, the pro-government coalition remains relatively united both militarily and politically. The forces that oppose the regime, on the contrary, are still splintered. Moscow is well-aware that despite large-scale international support, the opposition is being pulled in different directions by its various allies. Russia has been ruling the roost as the country that managed to uphold and protect Syrian state institutions and impose its rules of the game in the absence of Washington's clear agenda in Syria, the Saudi-Qatari crisis and internal problems in the Gulf region in general.

Russia is approaching a Syrian settlement with a “healthy skepticism,” which, by the way, appeals to the masses. Most Russians are quick to equate any FSA group with the Islamic State and continue to believe in the legitimacy of the ruling regime. The prove-that-they-are-not-terrorists stance toward the armed rebels allowed Moscow to carry out strikes against moderate opposition groups, only to recognize them as such during the talks. That was followed by the emphasis on Moscow's ability to seek and accept a compromise and hold a dialogue with all the parties to the conflict, regardless of the voting outcome. Moscow, thus, stressed its readiness to recognize any politician the Syrian people will vote for, be it Assad or his opponents.

I would like to be in the wrong here, but the current momentum has Assad as the sole victor in the civil war, while ostensibly factoring in the opposition's sentiments. But his Nov. 20 visit to Sochi shows there is no equal, full-fledged rival to the authorities among the opposition forces. In this sense, holding the Syrian National Dialogue Congress — even though it allows Kurdish participation — implies granting equal voting rights to the puppet opposition.

Correction: Nov. 30, 2017. An earlier version of this article mistakenly stated that one of the armed opposition groups delegates in Geneva will represent is Liwa Shuhada al-Yarmouk. Rather, it is Jaish al-Yarmouk.