As the military situation shifts in Syria, so does Tehran’s once-symbiotic status with Moscow. 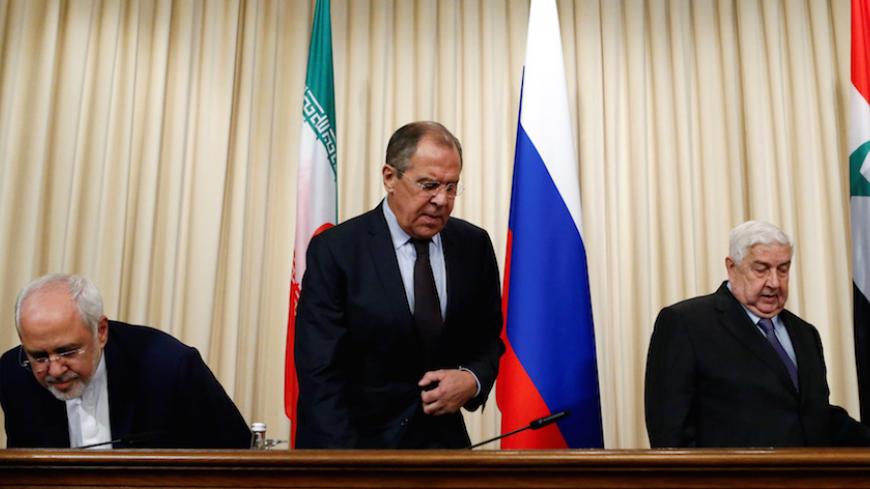 As the Islamic State (IS) has been in steady retreat, Iran and Russia are facing real difficulties sustaining their partnership. Each took advantage of the fight against IS to further its military campaign in Syria.

Both sides avoid discussing their differences, keeping their critics from making the most of the situation, but both fail to completely conceal the friction. In 2016, Moscow and Tehran jointly shielded Syrian President Bashar al-Assad's regime from the opposition and sought to preserve the remaining state institutions. In an attempt to freeze the six-year-long civil war, Russia is currently opting for agreements beyond the peace talks in Astana, Kazakhstan — that is, behind Iran’s back. Examples include the de-escalation zone in southwest Syria that Russia negotiated with the United States in Amman, Jordan, as well as de-escalation zones in eastern Ghouta and northern Homs, both of which were negotiated in Cairo.

In July, US President Donald Trump and Russian President Vladimir Putin agreed on the sidelines of the G-20 summit in Hamburg to establish a cease-fire in southwestern Syria, in the Daraa, Quneitra and Suwayda provinces, which virtually annulled the terms established at Astana of creating a southern de-escalation zone. The latter included Suwayda rather than Daraa and Quneitra. According to some sources, the US-Russia deal demands that pro-Iranian forces pull back at least 40 kilometers (25 miles) from the Israeli-Jordanian border, with Russia’s military police deployed on the ground. In the region, Moscow seeks to garner the support of the local population, even seeking to form loyal militias.

The separate agreement signed in Cairo between Russia and Islamist opposition faction Jaish al-Islam made it possible for Russian troops to run checkpoints in eastern Ghouta — an interesting development given that Turkey had officially stated in June that Russia and Iran would deploy forces to the Damascus area to monitor the cease-fire. It is hard to discern whether Russia has unilaterally revised the scenario developed by the Moscow, Tehran and Ankara working groups. However, a revision is definitely implied by Russia’s efforts to gain control of the situation in the Damascus region, where Assad’s forces and Iran-backed militias have tried different strategies to recapture opposition-held territories.

To be clear, conceptually, the zones were negotiated in Astana with Russia, Iran and Turkey as the main mediators. However, subsequent talks about the zones’ details have often altered or annulled those agreements.

Such steps raise Tehran’s fears that informal negotiating platforms are gradually replacing the Astana process. Therefore, Syria and Iran have been trying to reset at the very least the Cairo agreement inked beyond the Astana format. For instance, the Syrian Arab Army's elite 42nd Brigade of the 4th Mechanized Division has been deployed to the Jobar region, which Russia had included in the de-escalation zone. Moreover, both Damascus and Tehran are compelling Faylaq al-Rahman to leave the area along with Hayat Tahrir al-Sham (HTS). Presumably, Syria and Iran aim to exclude Faylaq al-Rahman’s several thousand militiamen from the above-mentioned deal, likening them to al-Qaeda-affiliated HTS extremists and undermining the opposition’s military capabilities in eastern Ghouta.

Since the start of the political and diplomatic conflict over Syria’s future, the Russian-Iranian partnership has been deteriorating into a rivalry, with Tehran impeding the creation of conditions for conflict resolution. At the same time, Moscow’s strategy directly depends on the permanent presence of numerous pro-Iranian forces controlling different parts of the front line.

Since Russia launched military operations in Syria in 2015, marking its “comeback” in the Middle East, Moscow has regarded Iran as a reliable partner. However, the Russian leadership, whether deliberately or not, has found counterbalances to distance itself from Shiite-led Iran. An Israeli-Russian accord allowing the Israeli air force considerable latitude in targeting Hezbollah in Syria emerged as the first counterbalance, which undoubtedly raised Tehran’s ire. The second counterbalance was probably Moscow's attempt to cultivate relations with the Gulf’s Arab monarchies through a set of stick-and-carrot policies as it sought to take advantage of the indecisiveness of the administration of former US President Barack Obama, especially during the lame-duck period. The third counterbalance emerged when Trump made his way to the White House and declared his willingness to restrain Iran and his commitment to backing the allied Sunni monarchies.

Hence, Russia should preserve and maintain communication channels with the United States on Syria. Unlike the earlier period, when the interaction aimed to ensure Russian troops' security, today’s task is to constrain Damascus’ and Tehran’s desire for reprisals and find a political solution to the Syrian conflict. Russia has taken several steps toward decreasing Iran’s influence: deploying military police in eastern Aleppo, establishing the de-escalation zone, and supplying weapons and equipment to prop up forces and increase the effectiveness of the 5th Assault Corps under Russian Lt. Gen. Sergey Sevryukov.

A Russian military intelligence source told Al-Monitor on condition of anonymity that since eastern Aleppo was recaptured by Assad's troops, Russia and Iran have been fiercely vying for regional dominance.

“Prior to the military operation, Moscow tried to establish relations with local elders through the mediation of Russian officers, natives of the North Caucasus region. But the ties were later severed, and as a result, Russian bombs rained down on eastern Aleppo. Then these contacts had to be re-established. At present, the work that Russian officers from the North Caucasus have done in east Aleppo has been considered fruitful, as it allows at least limiting Iranian regional influence.”

Since eastern Aleppo was seized, Russia has definitely increased its sway over the region. Russia turned the tide of war and helped the regime survive. However, over the war years, Tehran has gained momentum and built up a multi-layer presence in Syria that includes local Shiite militants.

These groups include Syrian units, offshoots of the Lebanese National Ideological Resistance in Syria and Syrian Islamic Resistance groups (sometimes called Iraqi Hezbollah), the units of the Local Defense Forces in Aleppo and the National Defense Forces, comprising Alawites, Sunnis and other Syrians backed by Iranian military advisers and partially or fully funded by Iran. New Iranian cultural centers and Shiite propaganda among the locals are Tehran’s soft-power instruments. This strategy heightens ethnic and sectarian tensions in the region, which helps spread IS and HTS propaganda.

The rise of HTS in rebel-controlled Idlib province and the use of delaying tactics in the negotiations play into the hands of Damascus and Tehran, which need a protracted military campaign to regain losses. They blame opposition groups for their ostensible loyalty to al-Qaeda. The Syrian government’s offensive to retake Idlib is a negative scenario for Russia and Turkey. Rebel forces will apparently rally to fight the common enemy. New coalitions will emerge among the moderate and radical opposition. Ultimately, the process will strengthen al-Qaeda's position in Syria and trigger a new humanitarian and refugee crisis. Obviously, under such circumstances, the advancing troops will also suffer heavy casualties. That's why Damascus and Iran will try to drag Russia into this new round of war.

Should the situation escalate, the Kremlin would tolerate the deployment of Turkish troops.

If the United States is genuinely intent on destroying the Iranian corridor — a piece of land carved through Syria that ultimately links Tehran through Iraq with the Mediterranean coast — Moscow and Washington will probably have something to talk about, albeit unofficially.