Moscow hopes to focus soon on rebuilding Syria's shattered infrastructure, but first must help restore stability, which could prove much more difficult. 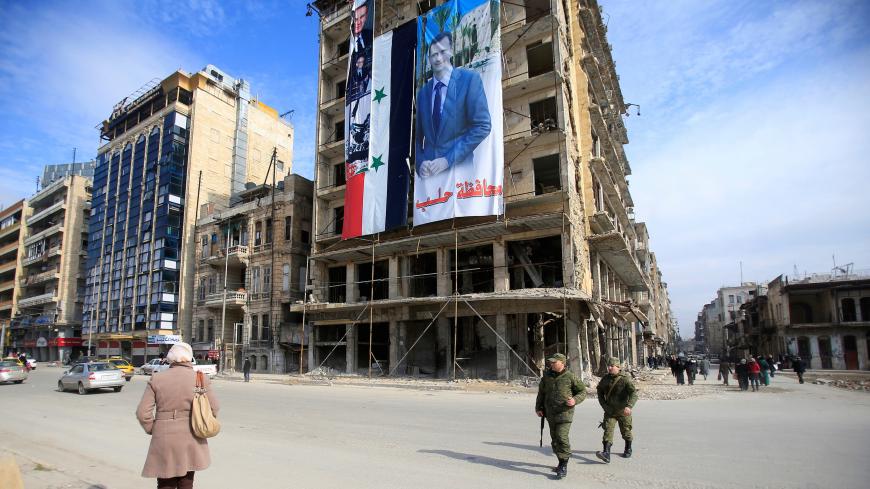 Russian Deputy Prime Minister Dmitry Rogozin went to Damascus Dec. 18 to meet with Syrian President Bashar al-Assad. Their agenda focused on post-war restoration: Russia particularly eyes cooperation with Syrian authorities on oil drilling, energy, agriculture and infrastructure projects. Rogozin also went to the Russian air base in Khmeimim to address a session dedicated to the operational use of Russian arms.

Remarkably, at a meeting with Rogozin, Assad called the Kurds fighting under American command “traitors.” This is rather telling of Assad's mood. Now that large Islamic State (IS) enclaves have been demolished, the problem of compromise between Assad and the opposition, and the question of the regime’s stability without foreign support, have become the most important aspects of the Syrian conflict.

Moscow repeatedly points out that the successful functioning of de-escalation zones creates the environment for political resolution of the Syrian conflict and boosts the trust between the regime and the opposition. So when Russian President Vladimir Putin made his dramatic statement Dec. 11 about victory over IS and gave yet another order to withdraw troops from Syria, this instruction hardly mentioned the military police force — which is predominantly composed of Sunni Muslims from the Northern Caucasus. According to Sergey Surovikin, the commander of Russia's military group, since Putin’s order went into effect, only one unit of the police has been withdrawn back to Russia, quite possibly from eastern Aleppo, which is controlled by the regime and is not included in any de-escalation zone.

The Kremlin’s idea to summon the Syrian National Dialogue Congress in Sochi and to later embed its results into the stalling Geneva process is fully based on the four existing de-escalation zones. The Kurdish Afrin district may theoretically also become a new de-escalation zone. However, to function steadily, the zones need stability on the lines of contact between government forces and the opposition. With the existing system of control over the cease-fire allowing punitive measures only against the opposition, it is profitable for Damascus and Tehran to delay any real political dialogue with the dissidents, especially as the world community still hasn’t precisely defined the principles of the transition stage that should lead to actual reforms in Assad’s regime.

The Syrian government is evidently ready for dialogue with the opposition and even for some sort of integration with it, provided opposition forces disarm under conditions set by Damascus. Yet that won't lead to a political solution, but will rather look like an enforcement to surrender. That means the regime has every possibility to launch an assault on the de-escalation zones under the excuse of “anti-terrorist operations,” based specifically on the numerous foreign or local pro-Iranian groups. In theory, the fact that Russia devised the de-escalation zones and has positioned its military contingent there should have an impact over its allies, although the reality is different.

In theory, the fact that Russia devised the de-escalation zones and has positioned its military contingent there should have an impact over its allies, although the reality is different.

Moscow seems to understand that it succeeded in establishing its goals for settling the Syrian crisis over other foreign agents: The United States has no comprehensive plan for managing the problem, and the Gulf nations are busy arguing with each other. Yet Russia doesn’t have full control over its allies; neither does it want a fight with them.

The situation in the de-escalation zones is a good example of a "peculiar view" of the peace process by the pro-Damascus coalition. In the Idlib zone, the allied Assad forces and pro-Iranian groups move toward each other from northern Hama and southern Aleppo heading to Abu al-Duhur air base. Their goal is to give the regime control of one-third of the zone. This scenario probably was agreed upon in the negotiations in Astana, Kazakhstan, within the framework of the fight against Hayat Tahrir al-Sham, a radical Islamist alliance. However, the Russian Ministry of Defense's map shows one-third of the zone has already been given to Damascus without any explanation, raising concerns over the potential for discreet cutting off of territories from other de-escalation zones. The Syrian government, with Moscow’s quiet consent, also continues to fight in the East Ghouta zone against two insurgent groups that signed the cease-fire agreements in Cairo and Geneva.

In terms of its conflict potential, the situation in the southern de-escalation zone seems to be most complex. Although the zone was a product of the Astana negotiations, it is functioning under special conditions designed in the framework of the Jordan agreement by Russia and the United States. Israel, however, claims the agreements do not prevent pro-Iranian groups from conducting actions near Israel's border. Rumor had it that, during his October visit to Israel, Russian Minister of Defense Sergei Shoigu agreed to create a buffer area of 5-10 miles around the border between Syria and Israel in the de-escalation zone, free of Hezbollah and pro-Iranian militants.

"It's clear that pro-Iranian troops being positioned near Israeli and Jordanian borders is unacceptable for Israel and the US, but Moscow can't prohibit Tehran from doing it, as the [Syrian] regime's stability depends on the powers supporting it. Russia only makes hints about it, while Iran either pretends not to understand the clues or rotates the troops, which doesn't change much [to the positive side for Israel],” a source close to Russian army intelligence told Al-Monitor. Thus Moscow cannot put a cap on the logistical route from Iran to Syria for Tehran, which, according to some reports, has already started to send trial weapon installments.

To avoid awkward inquiries, Moscow even uses diplomatic ploys to "answer" questions about withdrawing the Iranian proxy powers. “If we mention pro-Iranian groups, maybe someone will be tempted to dub the entire Syrian army as pro-Iranian. So what, should it surrender?” said Sergey Lavrov, Russia’s foreign minister, adding that the most serious threat comes now from American "charges," such as various foreign terrorist gangs tagging along with the US-supported armed opposition groups.

Damascus and Tehran enjoy the public silence about cease-fire violations, understanding that the political agreement on southwestern Syria largely allows both pro-Iranian groups and al-Qaeda affiliates to enter the area. Radicalization of the opposition in this respect is a good excuse for conducting operations in the de-escalation zones, more so when subjective foreign policy factors are added. With Arab-Israeli heated rhetoric on the rise and anti-American sentiments flaring up in the Arab world over US President Donald Trump's decision to recognize Jerusalem as the capital of Israel, Assad’s forces and Hezbollah started to position the troops for a new assault in the southwestern de-escalation zone. Also, Damascus is making appeals to attack the opposition in response to Israeli strikes on government forces designed to mark its “red lines” for the pro-Iranian groups.

In this situation, Moscow's position is important, and Russia can't always distance itself from the Iran-Israeli rivalry in Syria. However, since the Israel Defense Forces' assault in December, some experts on Russia are afraid that, using the defense of Syrian sovereignty as an excuse, Russia has started to send warning signals to Israel, meanwhile testing its arms in battle. For instance, during the December series of attacks that the Israeli military has launched on Syrian facilities, Russian media reported that a Pantsir-S1 air defense system had shot down an Israeli long-range attack, or LORA, missile around al-Kiswah area south of Damascus. Syria was provided with the last installment of Pantsir-S1 in 2013, although it's highly doubtful that the Syrian army is capable of stopping weapons as complex as a quasi-ballistic missile or a multiple rocket launcher.

To alleviate the escalation, it's logical to rely on the Druze armed groups included in Syria's pro-government National Defense Forces. However, since the Druze people also cooperate with Israel, they might minimize the influence of the pro-Iranian forces in the area. Yet Tehran and Damascus are unlikely to reduce their ambitions. Despite the claims about peaceful resolution, Assad’s regime will gradually integrate the opposition-controlled areas by force while imitating the willingness to yield concessions.