Calls for truce fall on deaf ears in Syria's Ghouta 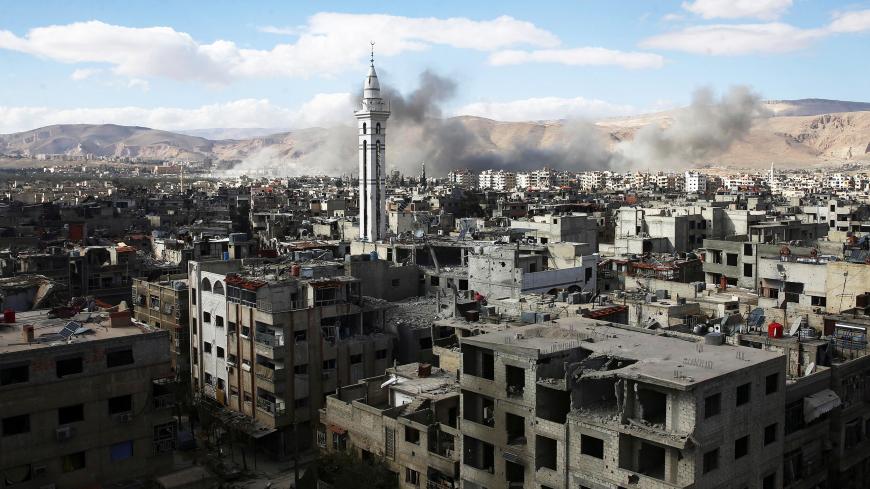 Despite demands for truces by Russia and the United Nations Security Council, Syrian regime forces continue to pound eastern Ghouta this week.

The situation in eastern Ghouta now is similar to that of Aleppo in December 2016, when UN Secretary-General Ban Ki-moon said, "Aleppo is now a synonym for hell."

Damascus, confident in the flow of support from Moscow and Tehran, continues to take advantage of the conditions on the ground to ensure control over the territories where “de-escalation” zones are supposed to be located. Instead of taming the regime, Moscow is embracing the line of Syrian President Bashar al-Assad and is now labeling opposition groups it had previously negotiated with as “terrorists."

A bitter joke popular in Russia these days is that after the country's presidential election in March, the Kremlin may need to declare a drawdown of its troops in Syria — for the fourth time.

The Syrian government on Feb. 25 officially launched an operation in eastern Ghouta to “ultimately liquidate the terrorist threat" to Damascus. (The regime says militants have long launched attacks on Damascus from eastern Ghouta.) The regime has now concentrated militias and regular forces in eastern Ghouta, including armored divisions and special forces and is attacking from different directions, focusing on the al-Nashabya and Ain Tarma neighborhoods. Both locales are under the control of the two dominant opposition factions in eastern Ghouta: Jaish al-Islam and Faylaq al-Rahman. Representatives of both groups had participated in peace negotiations in Astana, Kazakhstan, and in Geneva and welcomed the recent cease-fire calls. The groups even published a statement vowing that within 15 days after the truce ends, they will push the radical elements — meaning Hayat Tahrir al-Sham — out of the Ghouta enclave.

According to the Kremlin, opposition militants this week shelled civilians who were on their way out of Ghouta. Syrian government jets retaliated by launching new airstrikes. The Russian Defense Ministry further warned of a possible chemical attack by some opposition groups. “Given the information we have, militant leaders in eastern Ghouta are preparing a provocation using chemical agents in order to blame [Syrian] government forces of using chemical weapons against the civilians,” the statement said. The United States, however, blames the Syrian government, saying the regime attacked eastern Ghouta using chlorine gas.

Since the deal on de-escalation zones was struck last year, Damascus has been launching operations against eastern Ghouta under the pretext of battling Hayat Tahrir al-Sham, which has about 500 fighters in the enclave. In November, regime forces tried to break the positions of Faylaq al-Rahman. In December, the focus switched to the Harastra area, occupied by Ahrar al-Sham and Fajr al-Umma. The latter joined Ahrar al-Sham in the summer and soon became its core element. In January, Assad forces attacked the neighborhoods under control of Jaish al-Islam, where there are no Hayat Tahrir al-Sham forces.

Though the de-escalation zones have contributed to further fragmentation of opposition groups, the situation may still return to that of early 2017, when the regime offensive on eastern Ghouta led to opposition retaliations in Daraa province, and later in Hama province, which alleviated pressure on Ghouta. Given that the de-escalation zones are a product of the Astana agreements, in which Russia played a key role, the question arises: How is Russia justifying the situation in eastern Ghouta and Russian support for Assad's operations against all opposition factions that took part in those talks?

Russia tried to pressure the opposition without similar pressure on Assad. The violence in Ghouta virtually discredits the idea of de-escalation zones, while Moscow’s talks with Jaish al-Islam and Faylaq al-Rahman are a sign that Russia isn't so much seeking stability as it is looking for a way to transfer troops to the strategic, oil-rich area of Deir ez-Zor and to shield pro-government forces from responsibility for violating the truce.

Moscow would thus seek to have opposition groups take part in the next round of Astana talks. These might be Idlib-based opposition groups that Turkey would need to pressure to come to Astana, given the importance of Russian support for Turkey's Afrin offensive. These also might be eastern Ghouta-based factions, but only if Moscow is able to impose severe conditions on them.

The opposition in eastern Ghouta will have to either give in or push the radical elements out of its ranks. The latter would make further regime offensives illegitimate and at the same time enable the opposition groups to return to the Astana talks. But if the violence in eastern Ghouta continues to escalate and the opposition tries to drag regime forces out to other fronts, Moscow will be able to blame the rebels for breaking down the truce, justify its own offensive and replace “real opposition” in Astana with a “tamed” one to imitate progress in the intra-Syrian dialogue.