With evacuations from eastern Ghouta, the number of jihadis in Syrian territories controlled by Turkey has doubled, yet Turkey appears to be nonchalant regarding this threat. 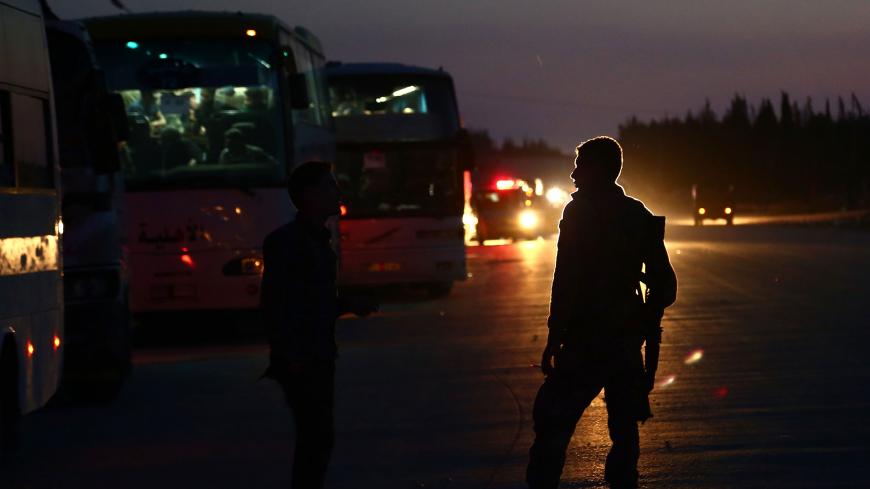 Allegations of chemical warfare in Douma and strikes by the United States, Britain and France to punish Syrian President Bashar al-Assad's regime have actually loaded new burdens on Turkey’s already-ambiguous position in Syria. With the evacuation of opposition forces from areas reoccupied by the Syrian army, the areas Turkey had taken control of with Operation Euphrates Shield — its offensive against the Islamic State and the Kurdistan Workers Party in Syria — have become jihadi reserves. For some reason, Ankara doesn’t seem to be too perturbed by this situation, which poses serious risks to Turkey.

Since March 9, about 70,000 Syrians — including fighters and their families — have evacuated from eastern Ghouta to al-Bab, Azaz and the Jarablus triangle under Turkey’s control, and the Idlib area, which is under the observation of Turkish troops.

Evacuations from eastern Ghouta were first made under agreements reached with jihadi groups Hayat Tahrir al-Sham (HTS) and Ahrar al-Sham and opposition group Faylaq al-Rahman; they peaked with the departure from Douma of Jaish al-Islam's 48,000 people, which included 8,000 fighters.

According to a UN report, of those evacuated from eastern Ghouta, 48,222 went to Idlib and 7,395 went to Jarablus. The Syrian Human Rights Observatory says about 67,000 people moved northward from Zamalka, Arbin, Jobar, Harasta and Douma. Those who evacuated north in buses from eastern Ghouta were settled in tent cities, mosques, schools or unfinished buildings. Turkish humanitarian associations announced they are preparing tent cities around Idlib. Members of Jaish al-Islam and their families are staying at a camp in Jarablus.

Over the past year and a half, tens of thousands of fighters who were evacuated from Aleppo, Homs, Hama, rural Damascus and the Lebanon-Syria border were settled in different parts of Idlib. Settlements of these jihadi groups — either in pockets of land under Turkey's full control or influence — are viewed by some as a Taliban/al-Qaeda "emirate" in the making along the Turkish border. Some observers say Turkey’s border provinces are becoming Turkey’s Peshawar (Pakistan).

So what was Turkey planning to do with these groups? After Turkey's two major military operations in northern Syria, some groups were organized under the name Syrian National Army and attached as a militia to the Turkish army.

But so far, nobody has really addressed a very touchy question: Turkey is managing the situation with its military operations, but when Assad's army moves to recover these areas, where will the tens of thousands of fighters go? The Turkish government, when asked to hand over control of Afrin to Assad's government, retorted that Ankara will be the one to decide when to leave Afrin and to whom it will cede control. Turkey said that there's no need to worry about these groups because it controls them.

Does Ankara see these outfits as temporary elements that facilitate Turkey’s presence in the field? Or is it thinking that Turkey could remobilize these outfits to fight the Syrian regime if conditions so require? Or will Turkey pull the plug on these outfits after consolidating its partnerships with Iran and Russia? Has Turkey learned from the experiences of other countries that survived similar situations? The ambiguity of the jihadis' potential massing on Turkey’s border continues as Ankara vacillates, but a new risk is emerging from the evacuation of eastern Ghouta. Tensions among rival jihadi groups in the north could escalate as new outfits arrive. That in itself would be a major headache for Turkey.

Many of the groups evacuated from eastern Ghouta were already fighting each other. In several clashes after 2016, Faylaq al-Rahman and HTS jointly fought Jaish al-Islam, which controlled the sole corridor with access to eastern Ghouta. Meanwhile, Faylaq al-Rahman and Ahrar al-Sham occasionally clash, too, even though Qatar supports both financially. Now, the Idlib branches of Ahrar al-Sham and HTS are fighting each other in Idlib. To challenge HTS, which is the dominating force there, groups led by Ahrar al-Sham, Nureddin Zengi Brigade and Shuqur al-Sham united to form the Syrian Freedom Front. Clashes between this new group and HTS at Maarat al-Numan, Jabal al-Zawiya and Hon Seyhun have reached unprecedented levels.

The most unwanted organization in Idlib is Jaish al-Islam, which is having serious issues with other outfits that are allegedly linked to Saudi Arabia. The tension was perceptible when hard bargaining was going on to decide who would be settled in which areas around Idlib. As a remedy, Turkey was persuaded during the bargaining to allow Jarablus to be used as an alternative destination. Elements of Ahrar al-Sham, Faylaq al-Rahman and HTS didn't encounter any problems in the Operation Euphrates Shield area controlled by Turkey, but Turkish soldiers seized the light weapons that Jaish al-Islam militants had been allowed to carry after Russian mediation.

As Jaish al-Islam has no presence in the north, there was some speculation that it might move to the south where its allies are present, but it was instead goaded toward the Turkish border. A social media message from Jaish al-Islam listed three issues between it and Turkey: Jaish al-Islam has its origins in the Salafist school — an ultraconservative branch of Sunni Islam generally denounced in Turkey; the group refuses to submit to the control of any other force, including Turkey; and it poses a threat to the Assad regime's allies, Russia and Iran.

Although Ahrar al-Sham and HTS are violently challenged by Jaish al-Islam, they also have Salafism in their ideological roots; the conflict is actually over Saudi Wahhabism. Although Jaish al-Islam political leader Mohammed Alloush resides in Istanbul, he is not seen as controlled by Turkey because of his connections to Saudi Arabia. Alloush attracted notice when he declared that his group will not be a party to conflicts in Idlib.

A logical analysis of the situation tells us that evacuating new fighters to Idlib simply means reinforcing armed groups already there in their rivalry for power. Although the standing of HTS and Faylaq al-Rahman are generally known, it's not clear which position Faylaq al-Rahman will adopt, because at eastern Ghouta it cooperated with HTS. Will it do the same in Idlib?

They may even opt for a practical way out and enlist with the Syrian National Army that Turkey has formed.

Turkey continues to embrace all jihadi groups and considers itself a fair, just sponsor. Turkey even tries to convert them to moderation. But radical elements generally prefer to remain independent when they are pushed toward moderation.

This is an endless game Turkey is playing with the radicals, and Turkey seems to be enjoying it.