The Syrian regime tightened its siege on eastern Ghouta, and the infighting within the opposition factions will likely contribute to the regime’s seizure of Ghouta. 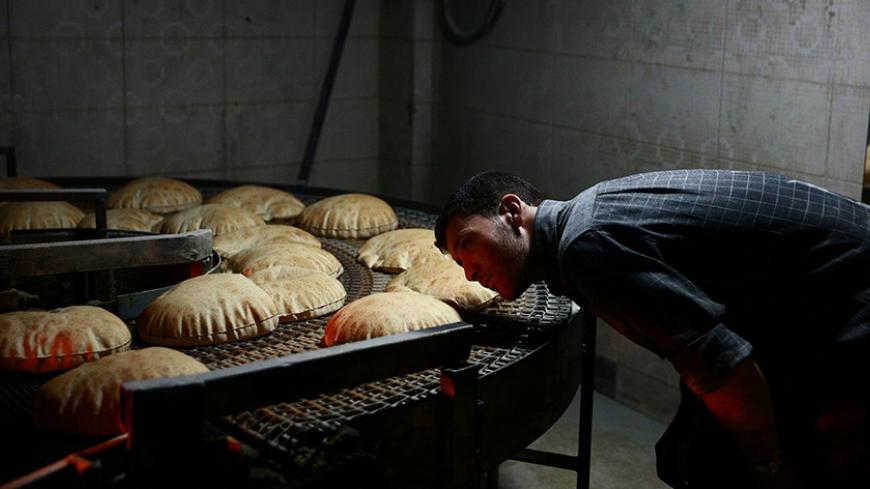 A man inspects bread to be distributed as aid in the rebel-held besieged city of Douma, in the eastern Damascus suburb of Ghouta, Syria, April 15, 2017. - REUTERS/Bassam Khabieh

Mona Mohammed has been trying to adapt to a new lifestyle that was imposed on her by the Syrian regime's siege of eastern Ghouta, to the east of Damascus, on March 21.

Mohammed, a teacher based in the city of Douma — the most populated city in opposition-controlled Ghouta — has been forced to bake at home and cook on firewood due to the lack of gas and the exorbitant price of bread. She rushes to recharge her electronic devices as soon as the generators start operating, because generators, the only source of electricity, only run for about 1½ hours whenever residents have the fuel to power them.

“Ever since the regime closed the al-Wafideen checkpoint, the living conditions have been getting worse by the day,” she told Al-Monitor.

On March 21, the regime forces closed the al-Wafideen crossing, which is named after a nearby Palestinian refugee camp. This crossing served as an outlet from which the opposition forces in eastern Ghouta brought in essential supplies, though the regime had control over the type and size of these supplies.

In conjunction with the closure of the al-Wafideen crossing, the opposition-controlled eastern neighborhoods of Damascus — namely Barza, al-Qaboun and Tishrin — witnessed a military escalation on the part of the regime forces aimed at settling the battle in the regime’s favor.

In addition, the regime forces, backed by heavy Russian aircraft shelling, have been attacking al-Qaboun neighborhood on a daily basis since Feb. 2, in a way not witnessed in the area for three years.

The regime forces broke through the opposition's defense lines on April 24 and isolated the neighborhoods of al-Qaboun and Tishrin from the Barza neighborhood and seized al-Hafiz Street, located between al-Qaboun and Barza.

Media activist Abdullah al-Mohammad, who is a resident of al-Qaboun neighborhood, confirmed this in a conversation with Al-Monitor. “[Bashar al-] Assad's forces are seeking to advance at all costs. They are destroying everything to move forward," he said.

Up until the closure of the Barza crossing, the eastern neighborhoods of Damascus that were part of the truce had been serving as a second outlet for eastern Ghouta. And while the regime forces isolated the eastern neighborhoods of Damascus from Ghouta following their seizure of the Damascus-Homs highway in June 2013, there still was a network of tunnels between the two areas.

However, with the closure of the Barza and al-Wafideen crossings and the regime's seizure of most of the tunnels — al-Rahma tunnel that links Ghouta to al-Qaboun being the most recent — both the eastern neighborhoods of Damascus and Ghouta have become increasingly besieged.

The Syrian regime has seemingly become devoted to settling the battle in eastern Damascus. After the al-Wafideen crossing generated enormous profit for the regime's officials and the merchants close to the regime, as the goods entering Ghouta were priced at tenfold their price in Damascus, the regime managed to settle the battle in other Damascus suburbs: Wadi Barada, Daraya, Maadimiya and al-Tall city, which are now devoid of any opposition forces.

Activist Ammar al-Bushi, who lives in the city of Irbin, told Al-Monitor that the Ghouta residents are suffering under the harsh siege that has been imposed on them, in particular because in May 2016 the opposition forces lost southern Ghouta, which is a fertile strategic area from which most of the residents’ needs originate. In other words, this poses a threat to Ghouta’s food stocks.

The internal fighting between the opposition factions was the direct cause behind the opposition's loss of the southern part of Ghouta last year. Since April 28, the fighting between those factions has restarted at a more violent pace. Bushi wondered which area would fall in the hands of the regime this year. He gave the answer to this question later, saying, “Al-Qaboun, which the regime has been continuously attacking for weeks.”

On April 28, Jaish al-Islam, the largest opposition group in Ghouta, attacked the headquarters of Jabhat Fatah al-Sham (former al-Qaeda affiliate) and Al-Rahman Corps in the areas of Irbin, Kafar Batna, al-Ash'ari and Hezzeh. According to Bushi, despite the April 30 demonstrations in which thousands of people took part calling for “an end to the bloodshed” and for “pointing guns at the regime,” clashes were ongoing and intensifying between the opposition factions in the city of Irbin as of May 3.

In a statement issued April 30, Jaish al-Islam said the objective of the attack is to end the presence of Jabhat Fatah al-Sham in eastern Ghouta and dissolve the “alien ideology that has dragged our revolution into a scourge.”

Jaish al-Islam claims that it is only attacking Jabhat Fatah al-Sham and that 70% of the forces have been dismantled in Ghouta. But its attacks also include Al-Rahman Corps, which accused Jaish al-Islam of taking over its stations in Madira, Beit Sawa and Katibat Aleftaris, all the while attacking the two towns of Zamalka and Sakba, where Jabhat Fatah al-Sham was never deployed.

The clashes left more than 150 faction members dead, medical sources told Al-Monitor on condition of anonymity, the latest of which being Deputy Commander of Al-Rahman Corps Capt. Abu Najib.

Jaish al-Islam has seemingly failed to fully control Ghouta as it started a battle beyond its capacity, and despite using tanks, it has thus far failed to settle the battle against Jabhat Fatah al-Sham, while Al-Rahman Corps is still significantly powerful.

There is no doubt that Jaish al-Islam’s inability to settle the battle in its favor will have negative consequences on the cohesion of the opposition fronts in Ghouta. In addition to the state of tension and distrust that will accompany the opposition fighters, the factions will be watching out for an attack from the back amid no sufficient reinforcements to the fronts the regime is attacking.

The opposition’s possible loss of the neighborhoods of Barza, Tishrin and al-Qaboun will allow the regime to tighten its grip on eastern Ghouta and then devote itself to attacking it. Meanwhile, the opposition will have been drained by the internal fighting on the one hand and the siege on the other.