Despite the cease-fire agreement reached between the Syrian regime and the opposition under Russia’s sponsorship, shelling in Eastern Ghouta has only gotten worse, adding to the residents’ hardships. 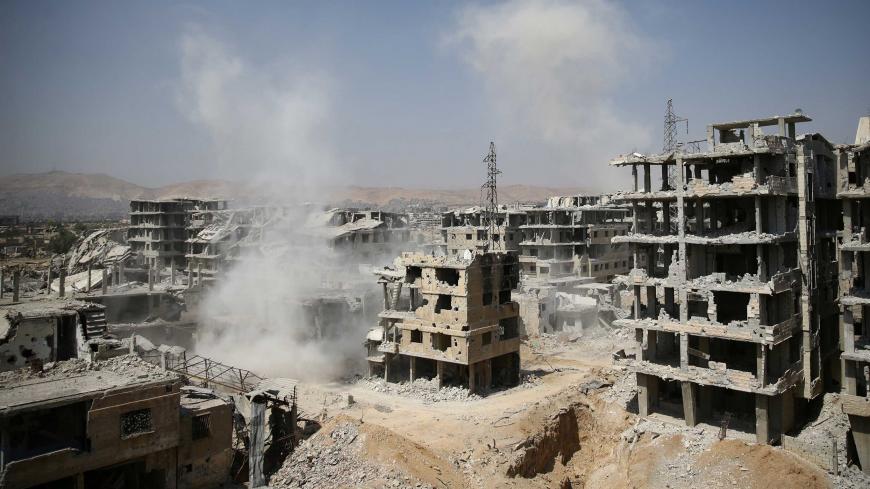 ALEPPO, Syria — Syrian regime forces continue to bomb cities and villages in Eastern Ghouta in Rif Dimashq, despite the de-escalation agreement the armed opposition forces and the Syrian regime reached in Cairo under the auspices of both Russia and Egypt on July 22. The opposition-controlled Jobar neighborhood in Damascus was heavily bombarded by the Syrian regime with six surface-to-surface missiles Sept. 14, with no injuries inflicted, while a number of civilians were wounded by artillery shelling targeting the city of Ain Tarma in Eastern Ghouta on the same day.

The shelling of towns and cities in Eastern Ghouta is accompanied by military operations launched by the Syrian regime forces against the armed opposition in Jobar and around Ain Tarma. As a result, al-Rahman Legion, one of the largest military factions operating in Eastern Ghouta, spoke on Sept. 10 about the possibility of calling off the cease-fire agreement in the region should the Syrian regime forces refuse to show commitment to the pact.

Muwafaq Abu Ghassan, the director of al-Rahman Legion’s media office, told Al-Monitor, “Ever since the cease-fire came into effect, the regime forces have not once stopped bombing Eastern Ghouta. They tried to break into Jobar neighborhood and Ain Tarma city on several occasions, but all their attempts failed.”

He added, “We knew the Syrian regime would never abide by the agreement, but the guarantees the Russians provided made us believe that this time could be different and the cease-fire could stand.”

Under the terms of the agreement between the Syrian regime and the Syrian armed opposition, Russia pledged to facilitate all civil, economic and commercial transactions and activities, in addition to allowing the entry of sufficient quantities of goods determined by al-Rahman Legion into Eastern Ghouta.

Abu Ghassan noted, “We agreed to a cease-fire to meet the demands of civilians in Eastern Ghouta who only want to live in safety, but at the same time we were fully prepared for any attempt by the regime forces to penetrate into Ghouta, which indeed happened. We told the Russians about the regime’s violations and they always responded with promises to verify the information and act accordingly, but they never took any measures to pressure the regime forces or truly implement a cease-fire.”

Activists in Eastern Ghouta believe that the role played by Russia in order to achieve a cease-fire in the region will not yield results. Russia portrays itself as a neutral party on the one hand and fights alongside the regime forces and supports it politically and militarily on the other. It turns a blind eye to all violations committed by the regime, not only in Eastern Ghouta, but in other Syrian areas where cease-fire agreements were supposed to be applied, such as in Homs’ northern countryside and Hama’s southern countryside.

Sariya Abu al-Bara, an activist from Eastern Ghouta, told Al-Monitor, “We do not understand the role that Russia is playing. It wants to be seen as the neutral party that wants to end the war in Syria. At the same time, Russian soldiers and planes are helping regime forces fight rebels across Syria. Sure, they are fighting the Islamic State in the northeast of the country, but they also have a presence in the outskirts of Eastern Ghouta.”

Abu al-Bara added, “All this time, Russia — the regime’s most powerful ally — could not pressure it to implement the cease-fire agreement that it supports and sponsors. The situation has become crystal clear — the Russians want to end the war militarily, but they have been unable to do so. Meanwhile, the rebels are ready for all possibilities, and this was expressed by the spokesman of al-Rahman Legion — Wael Alwan — when he said that rebels will respond on the field to any violation by the regime forces.”

Civilians inside Eastern Ghouta continue to suffer under difficult humanitarian conditions in light of the Syrian regime’s lack of commitment to the cease-fire agreement. The prices of foodstuffs significantly increased after the Syrian forces closed the crossing of al-Wafideen camp on Sept. 11, not to mention the ongoing bombardment using surface-to-surface missiles, mortars and rockets.

Mohammed al-Domani, a resident of Eastern Ghouta, told Al-Monitor, “When the cease-fire agreement was signed, we actually had high hopes. The terms included putting an end to battles, stopping the shelling and opening the crossings into Ghouta for humanitarian cases — but nothing changed. Not only are the battles still ongoing, but the regime also closed al-Wafideen camp crossing and the prices of basic foodstuffs skyrocketed.”

Domani added, “The residents cannot take this anymore; they are always the bigger losers. We wish the regime forces would be further pressured to implement the cease-fire agreement so we can at least live what is left of our lives in safety and be able to buy the goods we need at reasonable prices.”