Syrian rebels took al-Dukhaniyya last week in a bid to open supply routes to the front line in Jobar. 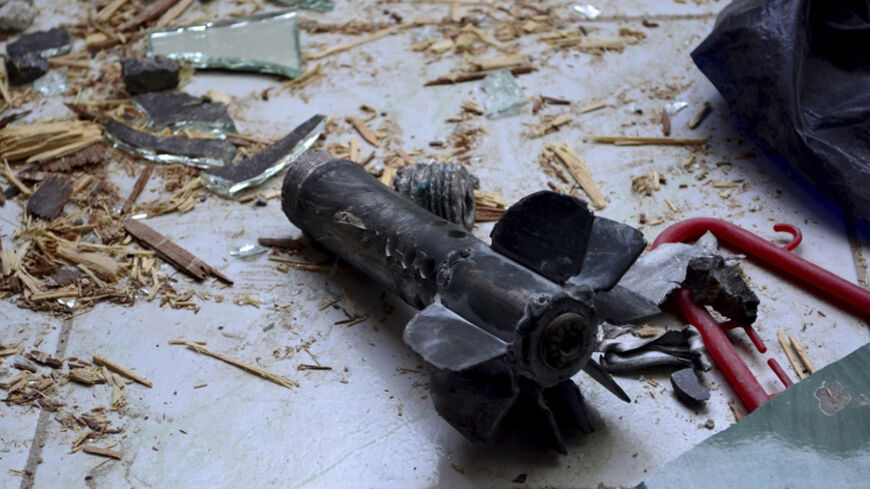 DAMASCUS, Syria — Clashes have escalated around Damascus in the last week after rebel forces ignited fronts south and east of the city, ending a lengthy period of calm for the capital.

Rebel mortar shells rained in the center of Damascus, with 12 shells simultaneously striking several areas of the city on Sept. 16. One rocket hit the Seven Lakes Square near the central bank, and others hit the neighboring Arnous Square, Shaalan neighborhood and al-Rawda Street. The rockets resulted in a number of injuries among civilians, but no reports of deaths. Eyewitnesses also said they heard three simultaneous explosions in Mezzeh 86.

Just a few meters separated me from the shell that fell in Seven Lakes Square. I felt my blood freeze inside my veins. Bystanders screamed and ran in all directions. Security forces tried to stop those who were running so as not to provoke widespread panic. Yet, standing still was no longer useful, so people ran into nearby buildings for cover.

The mortar shells on the city center came as fighting raged in the area of al-Dukhaniyya, 6 kilometers (3.7 miles) southeast of Damascus and within the Druze-Christian town of Jaramana.

Al-Dukhaniyya is important as it is the main entrance to the towns of Ain ​​Tarma and Kfar Batna in eastern Ghouta. It's also a gateway to Damascus, specifically the old city — and to the road to the international airport.

It was not easy to access Jaramana the next day. You can see from afar the destruction of some buildings on the Kabas highway, near al-Dukhaniyya. The destruction was caused by rebel shells coming from al-Dukhaniyya, Ain Tarma and additional checkpoints at the western entrance to Jaramana, where the Syrian army controls the entire surrounding area, namely Kashkul, al-Duwailah and al-Tabala.

Hundreds of cars lined up at the checkpoints to enter or leave Jaramana, which saw a large exodus of families from al-Dukhaniyya. Anyone in Jaramana could see clouds of smoke rising from al-Dukhaniyya and hear the sound of shelling and clashes. Fear was apparent as almost all shops were closed.

A Syrian army checkpoint prevented us from advancing toward east Jaramana. We asked a soldier at the checkpoint about the situation. “What is happening in al-Dukhaniyya is nothing more than a [distraction] to draw away attention so that Jabhat al-Nusra elements can improve their conditions, which have been deteriorating on the ground. The army will be able to expel them and recover the town in no time,” he said.

However, facts on the ground show that the operation was not simple. Rebel fighters have managed to control al-Dukhaniyya and are trying to advance further westward. In a phone conversation with Al-Monitor, a rebel fighter known as Abu Ammar said controlling al-Dukhaniyya "is very important because it would ease the pressure on eastern Ghouta and would probably open the supply line toward the city of Jobar.” He added, “We are fighting under the unified command of the military factions in Ghouta, and regime forces were not ready for this surprise operation.”

Observers noted that rebel fighters wanted to control the Kabas checkpoint through this operation, thus ending the main source of regime fire on the southern highway, which separates Jobar and Ghouta. But the opposition failed, and the regime re-established its control and strengthened its military presence there.

On Sept. 9, the Syrian Arab News Agency (SANA) reported, “There is no fear with the presence of the Syrian army. This was confirmed by residents of Kabas, adjacent to al-Dukhaniyya, which was infiltrated by armed terrorist organizations that attacked its inhabitants and displaced them. The army imposed a near full cordon on al-Dukhaniyya and killed many terrorists in a series of ongoing operations.”

For 11 days now, about 10 rebel mortar shells fall daily on the eastern areas of the capital. Half of them fall on Jaramana and the other half on Kabas. So far, 11 civilians have been killed in the eastern part of Damascus and Jaramana, including a child and a woman, while dozens others were wounded, according to Majd, a Jaramana resident.

Majd told Al-Monitor, “One of the shells landed in the street next to my house two days ago, killing a 10-year-old girl. We could not sleep during the past two days. The shelling and the clashes were very strong. We are afraid that the battle may expand toward us.”

The al-Dukhaniyya battle shifted to Ain Tarma on Sept. 12, with al-Dukhaniyya under rebel control. Government sources confirmed this and said the army has made progress after taking control of the Haditha factory, east of al-Dukhaniyya, and partially encircled the town.

The air force has conducted more than 12 raids on the outskirts of the neighborhood from the Ain ​​Tarma side. On Sept. 12, SANA reported, “A unit from the army and the armed forces is targeting gatherings of terrorists and their hideouts in Ain Tarma and al-Dukhaniyya in the vicinity of Damascus. It is eliminating many of them and destroying their weapons.”

The Syrian Observatory for Human Rights said on Sept. 12, “Violent clashes have broken out between Islamic brigades fighters and Jabhat al-Nusra (al-Qaeda in the Levant) on the one hand, and regime forces and loyal gunmen on the other, in the area of al-Dukhaniyya, on the outskirts of Damascus. Meanwhile, regime forces were shelling the confrontation area and the town of Ain ​​Tarma.”

These rebel attacks were not unplanned. The simultaneous events taking place on the ground suggest that this operation was premeditated in coordination with other factions to open a supply line in the direction of Jobar and alleviate the regime’s bombing of the city. Some armed factions in the Qaboun area, adjacent to Jobar, specifically in al-Hafiriya neighborhood, concurrently started a battle to advance in the neighborhood and control the streets close to the regime’s barracks that are bombarding Jobar and the rest of the Damascus countryside.

The heavy clashes have again brought Damascus into the spotlight, nearly a year after the fighting stopped in several areas. Qaboun and Barzeh have calmed because of reconciliation deals, while the regime gained control of Maliha last month. Despite the front reigniting in the east of Damascus, the reconciliation agreements south of the capital seem to be holding on.