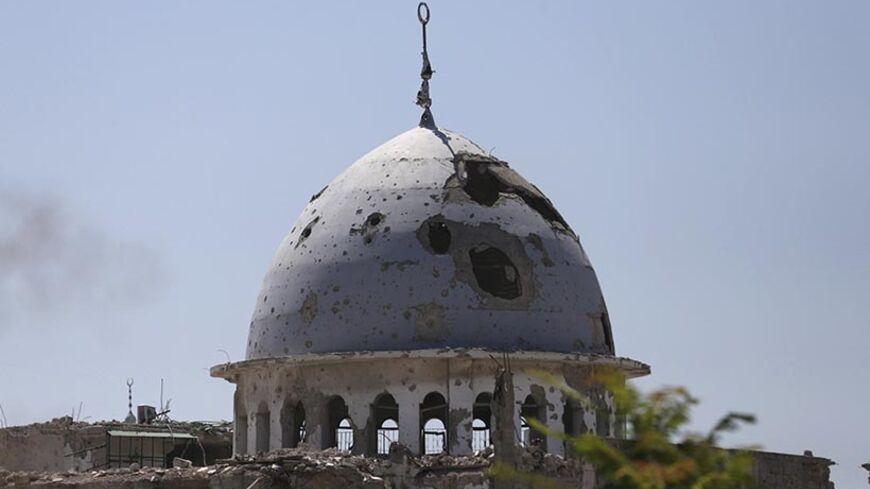 DAMASCUS, Syria — It seems that the Syrian regime has decided to exclude the Jobar neighborhood from the deals it made this year with the opposition in areas around the capital. On Aug. 28, government forces attacked the rebel stronghold of Jobar, near Damascus. Al-Monitor witnessed the heavy air and artillery shelling of the neighborhood as well as a massive military buildup at its entrances.

The shelling could be heard all over Damascus. Smoke filled the sky above the capital and the rockets launched toward Jobar were clearly visible to the residents of neighboring areas such as Bab Touma, al-Qasaa and Abbasid Square, one of the largest squares in Damascus. The neighborhood’s entrances were filled with army tanks and soldiers were stationed on the outskirts of Zablatani, adjacent to al-Hal market, southwest of Jobar.

The soldiers imposed a siege on the neighborhood from three main points, most notably in the east — which is linked to the opposition’s stronghold in Eastern Ghouta — making it impossible to access the neighborhood.

The regime’s air raids over the neighborhood were nonstop. More than 10 raids a day were launched, according to Abu Mohammed al-Dimashqi, an opposition activist in Jobar. He told Al-Monitor over Skype, “This is the first time the regime uses unknown types of rockets. They are powerful explosive rockets loaded with parachutes. However, the rebels were able to fight off the regime forces’ attacks and caused them serious damage.”

The Syrian Arab News Agency reported Aug. 30, “Army units continued the operations in Jobar that started on Aug. 28, advancing from the north and Zamalka bridge toward the south, establishing control over several building blocks and killing scores of terrorists, among them non-Syrians.”

According to Tamer Jawani, one of the journalists covering the Syrian army’s operations, regime forces are in control of the General Company for Internal Transport of Damascus, the Mercedes building and the repairs building for Syrian Military Intelligence, which are close to the Abbasid parking garage in which buses operating from Damascus to other provinces are parked.

He told Al-Monitor, “The Syrian army units are attacking the strongholds of Ajnad al-Sham militants in the north, in the parliament and al-Manasher roundabouts and the industrial area along the Tora river.” A major target is the power plant in the Maamel industrial area, the closest point of Jobar to the capital. The power plant stopped supplying electricity to regime-held neighborhoods such as Bab Touma, Zablatani and Tijara when Jobar fell to the opposition. This prompted the regime to redirect electricity from other plants, causing regular power outages. Should the regime capture Jobar, it would be able to fully restore electricity supply to these central Damascus neighborhoods.

Jawani told Al-Monitor that the strategy of rebel fighters in Jobar relies on tunnels. “They are moving through the sewage tunnels that are no longer used, in addition to secondary tunnels that were dug using German excavators. However, the army was able to fight back by digging countertunnels all around the neighborhood to prevent any expansion toward the capital.”

Rebel fighters took control of Jobar in October 2012, and the neighborhood is considered one of the main sources of the mortar rockets that are launched daily toward the capital.

Hafez Nabil, a retired Syrian brigadier general, told Al-Monitor from Damascus, “The regime is trying to secure the capital. It is establishing a security cordon around it, whether through the settlements concluded with opposition fighters, as in Barzeh, al-Qadam and al-Asali neighborhoods, or through major military operations, as in al-Maliha and now in Jobar.”

The Syrian authorities have been criticized by some loyalists over the ongoing shelling on the city, with calls to act to end the mortar fire.

In this regard, Nabil said, “Jobar is not the only source of mortar shelling, and controlling it will not stop the shelling, but will only reduce it. Ghouta is entirely under the opposition fighters’ control and if the army fails to control it, I believe the shelling will increase and will probably evolve into missile shelling, while the conflict will probably reach the center of the capital. The regime could have concluded a settlement with the fighters in Jobar, but it seems that it is looking for a new victory following the Islamic State strikes in Raqqa.”

Dozens of mortars are being dropped on Damascus, causing daily deaths and injuries. The shelling is concentrated on the neighborhoods of Abbasid, Bab Touma, al-Qasaa and al-Tijara, and sometimes in the heart of the capital.

Rita, a college student who lives in Bab Touma, told Al-Monitor, “The situation cannot continue this way. The shelling is ongoing and does not distinguish between civilians and military or pro-regime and opposition [forces]. The bombardment must be stopped. Last week, I lost two friends to mortar shelling on the neighborhood.”

Saif al-Islam — a pseudonym for a rebel leader fighting in Jobar — told Al-Monitor via Skype that if the regime manages to control the neighborhood of Jobar, the Eastern Ghouta front — the largest stronghold of the opposition forces — will be opened.

He said, “The fighters will lose their stronghold that is closest to the capital if the regime is able to [control Jobar]. Our announcement of a unified leadership and success in blowing up buildings where regime forces were staying on the outskirts of Jobar has certainly had a significant impact on the decision to attack the neighborhood. We are defending the neighborhood as hard as we can, and I do not think that the regime will be able to break into it. Once we are able to repel the attack, we will attack new posts.”

The battle of Jobar continues, and the Syrian authorities announce daily that regime forces are advancing in the neighborhood, while rebel groups do the same.

Meanwhile, air force raids and artillery fire continue and infantry forces are slowly advancing as rebel fighters continue to build fortifications. The smoke of the battle still covers the sky of the capital and once it dissipates, the victor will be revealed.