Syrian opposition forces are battling for control of regions near the Israeli border, threatening a conflict with that country, reports Nasser Chararah. 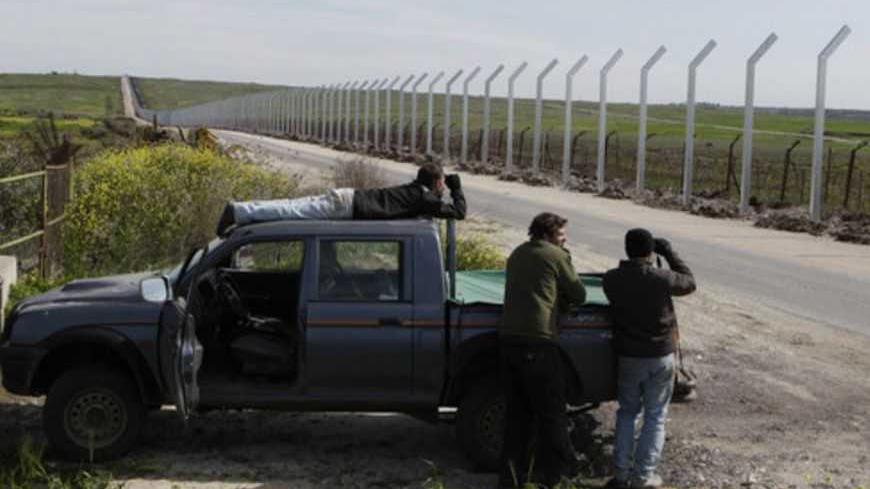 Israelis use binoculars to see the fighting in the Syrian village of al-Jamlah, from the Israeli-occupied Golan Heights, close to the ceasefire line between Israel and Syria, March 7, 2013. - REUTERS/Baz Ratner

Over the last two weeks clashes in Syria between the regime and opposition forces have expanded in scope and extended to the Syrian border region with Israel. Opposition forces chose the town of Khan al-Shih and its environs from which to launch attack on the barracks of the 4th Armored Division of the Syrian army. This location boasts the geographical advantage of being located in between the capital city of Damascus and the city of Quneitra, the latter of which sits on the edge of the occupied Golan Heights, adjacent to the ceasefire line dividing Israel and Syria.

This area is also home to the Khan al-Shih Camp, a refugee camp for Palestinians, which, despite the fact that its residents are legally refugees, houses a population that is largely middle-class, with some families that could even be considered well-off. Contrary to the commonly held correlation between poverty and religious extremism, the refugee camp of Khan al-Shih has seen the popularity of radical Islamist groups steadily increase over the past two decades. Within the past five years, Syrian security forces foiled Salafist groups’ attempts to establish an “Islamic emirate” within the camp.

Under the leadership of Jabhat al-Nusra, “Islamist refugee camp groups” are laying designs to take control of the Khan al-Shih region, which would enable them to open up new fronts on Damascus and Quneitra. The opposition wagers that it will be able to achieve two other strategic goals in the event Khan al-Shih does fall under rebel rule: The regime’s stranglehold on military dominance in Damascus would be broken, and the opposition would establish a sphere of influence extending from Khan al-Shih down through Quneitra.

The battle for Damascus

Thus far the battle for Damascus has revolved around two axes, and in both cases the regime has the upper hand. The first and more crucial axis of the two focuses on the village of Jobar and nearby Abbasid Square. In order for the massive opposition presence in Jobar to survive, it requires direct access to the opposition stronghold of Daraya, lying on the outskirts of Damascus. In between these two opposition-held districts lies Abbasid Square, itself located in Damascus proper, and it is here that the Syrian army has decided to sever the vital lifeline connecting Jobar and Daraya, having designated it “an impact point.” Jobar, which lies on the outskirts of Damascus, is less than a kilometer away from Abbasid Square.

The Syrian army has shelled and mortared Jobar and Daraya for months on end, in keeping with the principle of establishing “a ring of fire.” There is a growing fear among the opposition that the regime may succeed in eventually overtaking Jobar, especially if its year-long siege of Daraya bears fruit.

The significance of an opposition takeover of the Khan al-Shih region is that the opposition would be able to relieve the pressure from Daraya and simultaneously open up the Jobar-Daraya front, from which it could launch an offensive and gain a foothold inside the capital in nearby Abbasid Square.

If reports are true that the opposition has in fact taken the Khan al-Shih barracks from the 4th Armored Division of the Syrian army, then the military balance that has persisted for months in Damascus and its environs as well as in Quneitra and its environs will have been thrown into flux.

A rebel takeover of Khan al-Shih would also impact the second of the two axes, which centers on the city of Quneitra and the nearby ceasefire line on the Israeli-Syrian border. During the past two weeks there has been a flurry of noteworthy events on this front, all of which portend the collapse of the Syrian-Israeli ceasefire line presided over by the United Nations Disengagement Observer Force (UNDOF). In late February, Croatia announced the withdrawal of its unit from UNDOF after it was revealed that Croatia had sold arms to Qatar that later ended up in the hands of the Syrian opposition. A few days later, an Islamist extremist group that identifies with the Syrian opposition abducted Philippine soldiers working with UNDOF on the Syrian-Israeli border.

The Islamist extremists justified their actions by claiming that the UNDOF is aiding the Syrian regime and demanded that they withdraw completely from the region — a justification so easily rebuffed that it raised questions regarding the group’s real motives, which some believe include undermining the ceasefire and thus embroiling Israel in the Syrian crisis.

Tel Aviv’s announcement a few weeks ago that it plans to erect a security barrier adjacent to the Syrian border resembling the one it built in southern Lebanon further reinforced this reading of the events. Israel cited the loss of Syria’s control over its borders to the benefit of radical Islamist groups as a pretense for erecting the barrier. Opposition ground movements that intimate their intention to take Quneitra, coupled with the withdrawal of regime units towards Suwayda and Damascus, strongly suggest that the facts on the ground in the area bordering the ceasefire line are set to qualitatively shift in the opposition’s favor.

Rumors of an impending Israeli intervention have grown louder ever since the Israeli airstrike on the Syrian Scientific Center in Damascus last month.

Sources from the Syrian regime maintain that Israel would intervene by providing material support to armed groups that are operating under the guise of Syrian opposition forces. These groups would then target assets of the Syrian army, which Israel considers a threat to its own security.

Israel recently announced the discovery of oil in the Golan Heights and its plans to begin drilling despite objections from Damascus. From Syria’s standpoint, Israel has plans to invest in oil and establish pockets of security within Syrian territory. The recent events in Khan al-Shih play into this scenario, for with the collapse of the ceasefire line, Israel will be able to justify constructing the security barrier by claiming it is preempting extremist groups taking control of the region.

by Murielle KASPRZAK and Joseph SCHMID | AFP | May 26, 2022
END_OF_DOCUMENT_TOKEN_TO_BE_REPLACED