The Palestinian refugees in Syria are still waiting for the green light to go back to their camps following a wave of displacement that resulted from clashes between the Syrian regime and gunmen. 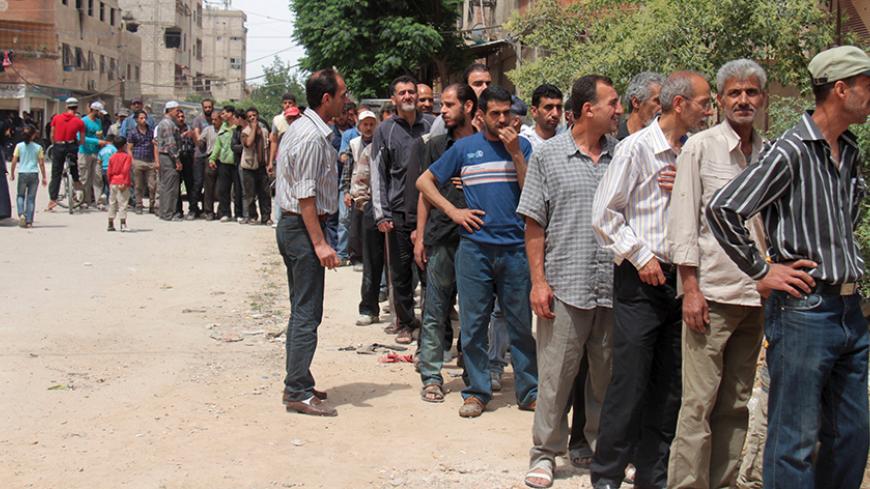 Residents and Palestinians who fled the Yarmouk refugee camp wait in line to receive parcels of humanitarian aid in the besieged southern outskirts of Damascus, Syria, May 23, 2015. - REUTERS/Ward Al-Keswani

RAMALLAH, West Bank — The situation of Palestinians displaced from their refugee camps in Syria remains complex. Some progress toward returning them to their homes in the camps has been noted, even as other efforts have stalled.

These are refugees driven from their homes in camps by the Syrian civil war. Many are second-time refugees, having ended up in Syria in the first place because they were displaced from the West Bank after the 1967 war with Israel.

During an April 16 meeting, the PLO factions in Syria welcomed news that Sabina camp residents might be able to return in the near future, pending further negotiations with militants in the area. The factions also praised the government's measures to allow movement in and out of the Khan al-Shih camp, and for the government’s ongoing negotiations with gunmen to get them to leave the Yarmouk camp. The Yarmouk talks have been particularly complicated by many factors.

According to the UN Relief and Works Agency for Palestine Refugees in the Near East (UNRWA), the Sabina refugee camp, just south of Damascus, was home to more than 21,000 registered Palestinians who were displaced from the West Bank following the 1967 war. The camp, however, was completely emptied of its residents following clashes that erupted in late 2012 between insurgents and the Syrian army. The latter regained control of the camp in November 2013.

Khaled Abdul-Majid, secretary of the Palestinian Revolution Factions Alliance in Syria, told Al-Monitor no one has returned yet because militants remaining in southern Damascus and nearby areas could infiltrate the camp again.

Abdul-Majid said negotiations are underway to remedy the situation. Meanwhile, the residents remain in the nearby town of Sahnaya on the outskirts of Damascus in shelters provided by the Syrian government and the UNRWA.

“We have established contact with the concerned state authorities to accelerate the process and have people immediately return,” he added.

However, Ayman Abu Hashim, general coordinator of the Free Palestinian Syrian Assembly, told Al-Monitor, “The regime forces controlling the Sabina refugee camp are the ones obstructing the return of refugees.”

“Families might return to the camp, but the regime forces are failing to take any serious steps in this regard,” Abu Hashim added.

As the Sabina camp awaits the return of its residents, Palestinian families have started to move in and out of the Khan al-Shih refugee camp southwest of Damascus, which had a population estimated at more than 19,000 in 2011, per the latest UNRWA statistics.

Ahmed al-Majdalani, envoy to Syria for Palestinian President Mahmoud Abbas and a member of the PLO’s Executive Committee, told Al-Monitor that Khan al-Shih, unlike the Sabina camp, had not been fully deserted. The Syrian government reached an agreement back in November with the gunmen, who gradually left the camp heading toward Idlib and Daraa. Majdalani said forces of the PLO-affiliated Palestine Liberation Army and Syrian army are working on logistic arrangements aimed at restoring normal life there.

Asked about the situation in Yarmouk, Majdalani said it is still complicated, as the Islamic State (IS) has seized the southern part of the camp and Jabhat Fatah al-Sham forces control the center of the camp. Palestinian factions control the rest. This makes the return of refugees very difficult for now.

Majdalani said contacts are ongoing with the remaining 5,000 refugees in the camp to follow up on their living conditions and field developments there. Abdul-Majid said, “IS impeded a breakthrough in the Yarmouk camp following contacts between the Syrian state and Jabhat Fatah al-Sham militants, who are estimated at 700. … IS refused the agreement.” This raised concerns that IS might also take over the center of the camp if Jabhat Fatah al-Sham leaves.

Abdul-Majid, with the Palestinian Revolution Factions Alliance, confirmed that Yarmouk is completely surrounded by the Syrian army, “and the problem can only be resolved by the entire withdrawal of the militants from the camp and the surrounding areas.”

He added, “There are bids to hold talks between the Syrian regime and Jabhat Fatah al-Sham and have militants withdraw from southern Damascus, namely from the regions of Yalda and Beit Saham, which are close to the Yarmouk camp.”

There are about 15 Palestinian refugee camps in Syria, with Yarmouk being the largest. It was established in 1957, south of Damascus, and was home to more than 200,000 Palestinian refugees before the IS seized major parts of it in April 2015.

Although the Sabina camp is awaiting the return of its residents following the return of the Khan al-Shih residents and the current attempts to create a breakthrough in the Yarmouk camp, such a return is seemingly difficult to achieve in light of the complex security situation on the ground and the continuation of fighting with no agreement in sight.