Palestinians to partner with Damascus on refugee camp reconstruction

Palestinians in Syria are eagerly awaiting the end of hostilities in the Yarmouk refugee camp and its surroundings so the Syrian regime can begin reconstruction in the area. 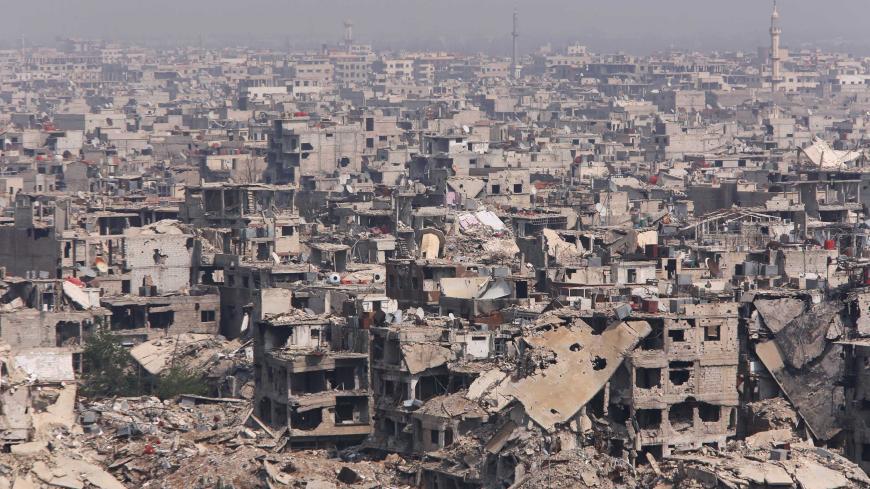 RAMALLAH, West Bank — Palestinian eyes are on the Yarmouk refugee camp just south of Damascus, where the Syrian regime and its supporting Palestinian factions, such as the Popular Front for the Liberation of Palestine, are fighting Islamic State (IS) militants. On May 2, the Syrian army was able to deploy troops around the area, which was previously controlled by Jabhat al-Nusra.

In April 2015, IS had control of 90% of the camp after fighting with Aknaf Bait al-Maqdis and gunmen from various factions.

The Palestinians hope for a quick end to the military operations in the camp, with IS’ defeat and the liberation of the camp. This will allow the reconstruction process to begin and the displaced to return. To that end, Palestinians seem to be betting on good relations between the PLO and the Syrian government.

On April 25, the director of the political department of the PLO in Syria, Anwar Abdel Hadi, revealed to the Voice of Palestine that he met with Syrian Minister of State for National Reconciliation Affairs Ali Haidar and UN Resident Coordinator in Syria Ali al-Zaatari and discussed the need to provide assistance and support for refugees and to begin reconstruction in refugee camps in Syria to ensure the refugees’ safe return once the militants are eradicated.

Haidar had stressed in several meetings with Palestinian delegations — most recently on June 7 and Sept. 25, 2017 — that the Syrian army was working on a plan to rid the camp of militants and allow people back, noting that Syria is keen to preserve refugee camps as a focal point of the Palestinian cause.

Ahmad Majdalani, Palestinian President Mahmoud Abbas' envoy to Syria and a member of the PLO’s Executive Committee, told Al-Monitor, “There was a decision to establish a PLO committee to manage the reconstruction of the camp,” adding, “The committee will raise funds for reconstruction and the return of the camp’s residents, coordinating with the Syrian authorities.”

Majdalani explained that the committee is waiting for the end of the military operations between the Syrian army and the militants and the clearing of the rubble to begin its operations.

After getting a clearer idea of the magnitude of the damage, the PLO will coordinate with the Syrian authorities on the details of the reconstruction process and with international parties to bring in support and funding for reconstruction. It may also run a fundraising campaign among Palestinians.

The Yarmouk camp is one of the largest Palestinian camps in Syria and some consider it the capital of the diaspora. It was established in the 1950s and hosted 200,000 refugees before violence erupted at the beginning of the Syrian crisis that left IS in control.

Meanwhile, Abdel Hadi told Al-Monitor on the sidelines of the PLO National Council session in Ramallah held April 30-May 3, “The national committee will work on the reconstruction of Palestinian refugee camps in Syria under the auspices of the PLO.”

He added, “We have contacted relief agencies such as the UNRWA and some donor countries such as Norway, and they are ready to help finance the reconstruction. Coordination with the Syrian authorities is ongoing and they have agreed to start reconstruction after clearing the camp of terrorists.” Abdel Hadi noted, “The committee will meet with the Palestinian factions and the rest of the parties to determine details of the reconstruction process after the camp is fully liberated.”

In addition to Yarmouk, several other camps are in need of reconstruction, such as Daraa and Sabinah in southern Rif Dimashq governorate as well as Handarat in Aleppo.

The Palestinians are counting on starting reconstruction in the camp immediately after the clashes end, taking advantage of international eagerness to make donations for reconstruction in Syria. Most recently, the UN Brussels Conference on April 25 allocated $4.4 billion to all Syria. On May 31, 2017, Norway pledged to assist in the reconstruction of the camp’s infrastructure in cooperation with UNRWA after calm is re-established in the area.

The Palestinians are betting the camp's reconstruction will become a top priority for the Syrian government for various reasons. The Popular Front for the Liberation of Palestine's central information officer, Anwar Raja, told Al-Monitor, “Reconstruction is inevitable as the Syrian state removes rubble and starts working on infrastructure and reconstruction immediately upon the liberation of any area recaptured from militants,” as it did in Raqqa, for example.

He added, “The Yarmouk camp is more important than other areas, for Syrians or for Palestinians alike, for several reasons, such as its strategic location and proximity to Damascus. It is also an important commercial and economic market, not only for the Palestinians but also for low- and middle-income Syrians. Reconstruction and allowing residents back in the camp will alleviate social and economic problems and contribute to resolving the Syrian and Palestinian humanitarian crisis.”

He continued, “Palestinian factions discussed Yarmouk's reconstruction with the Syrian state. They were promised that rehabilitation works would kick off after the camp is liberated and all the wreckage of the war is cleaned out. This process only takes a few weeks and infrastructure will be first on the to-do list.”

Raja is not holding his breath for the PLO or international relief agencies to play an active role in the reconstruction process. “We do not expect the PLO to make significant contributions to Yarmouk's reconstruction because it is simply unable to do so. International bodies are providing support to Palestinians little by little, and are blackmailing them in return, not to mention UNRWA’s financial deficit,” adding, “The Syrian government has, however, promised to do its best to rebuild the camp as soon as possible.”

For his part, the secretary of the Alliance of Palestinian Resistance factions in Syria, Khaled Abdul Majid, said the destruction in Yarmouk is not as severe as some opposition parties might like to claim, asserting that reconstruction will proceed based on the Syrian government’s arrangements.

Abdul Majid called on the PLO to assume a prominent role in reconstruction and mobilize Arab and international groups.