Palestinian refugees in Syria hope to return to Yarmouk

While some Palestinian refugees are hopeful than they will return to the Yarmouk refugee camp in Syria, others are less confident in the Syrian government's facilitation of the process. 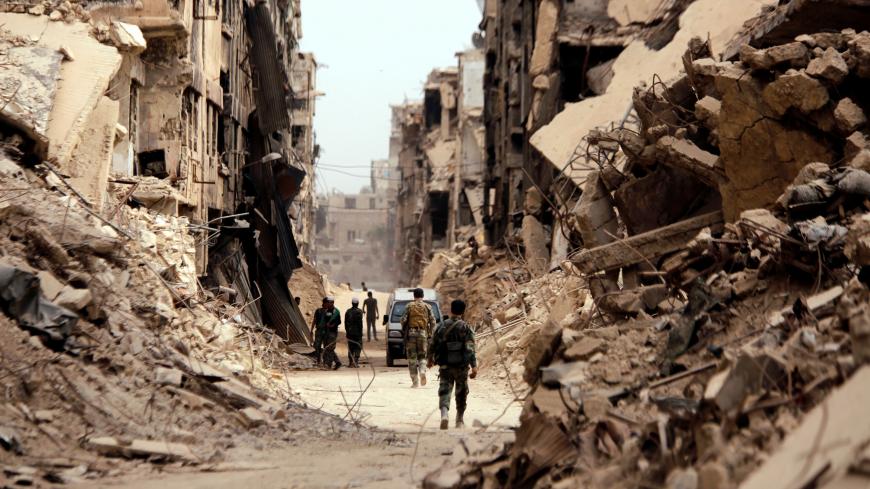 Palestinians stand atop a damaged building as they wait for the return of their relatives from the annual pilgrimage to Mecca at Rafah border crossing in the southern Gaza Strip, Sept. 12, 2017. - REUTERS/Ibraheem Abu Mustafa

RAMALLAH, West Bank — In a meeting held Nov. 12, the Syrian government tasked the Damascus provincial council with rehabilitating the infrastructure of the Yarmouk refugee camp in southern Damascus and restoring services to prepare for the return of the displaced.

The statement comes in the wake of an official Syrian decision allowing refugees to return to the Yarmouk camp. Syrian Deputy Foreign Minister Faisal al-Miqdad informed the Palestinian factions in Syria of the move on Nov. 6.

Although the Syrian authorities have yet to specify any details for the return process, the decision gave hope to the Palestinian refugees who were displaced from the camp over the past years. Rubble-clearing operations have been ongoing in the camp since Sept. 15 after Palestinian President Mahmoud Abbas pledged to cover their cost.

The committee overseeing the rubble clearing was formed with the approval of the Syrian government and under the supervision of the General Administration for Palestine Arab Refugees in Syria in coordination with Palestinian factions. It said in a Nov. 9 press release that it is still working to remove the remaining rubble from the lanes and alleys of the camp and that the rehabilitation process will accelerate in the coming days.

Ayham Hamada left the camp with his family on Dec. 17, 2013, and has been living in Damascus ever since. He seems optimistic about the prospect of returning to the camp in the wake of the Syrian decision and the rubble removal operations.

“I and the residents who had to flee the camp when the fighting broke out between the Syrian army and the armed militias such as the Islamic State and Jabhat al-Nusra now see a glimmer of hope,” Hamada told Al-Monitor. “I was not optimistic about our return because there are many liberated areas such as Daraya to which residents never returned as no rubble removal has started there. But we are thrilled at the Syrian decision. We are very hopeful although the rehabilitation and reconstruction operations require great efforts on the part of the [United Nations Relief and Works Agency for Palestine Refugees in the Near East], the Palestine Liberation Organization, the Syrian government, international parties and businessmen.”

He concluded, “Refugees will be able to return soon but a lot of effort is still needed as basic services such as electricity, water and health services have yet to be provided.”

In statements issued Nov. 7, both the PLO Refugees Affairs Department and the UNRWA welcomed the decision of the Syrian government.

Ahmed al-Majdalani, a member of the PLO Executive Committee, told Al-Monitor that since IS' defeat and expulsion from the camp in May 2018, the PLO has been in contact with the Syrian government to coordinate the reconstruction and rehabilitation process in the camp and ensure the return of refugees.

Two Palestinian delegations have visited Damascus over the past couple of months. On July 9, a delegation from the PLO and the Fatah Central Committee met with Syrian officials including Syrian Prime Minister Imad Khamis and Interior Minister Mohammed al-Shaar. The delegations discussed the situation of refugees in Syria. PLO Executive Committee member Bassam al-Salehi was part of one of next, and he handed Miqdad a letter from Abbas to Syrian President Bashar al-Assad on Sept. 23. The letter focused on the need to restore the Yarmouk refugee camp and return refugees, and also conveyed the Palestinian positions on the political developments in the region.

“As the end of the rubble clearing draws near, the second phase would be the restoration of habitable houses,” Majdalani said. Asked about the reconstruction cost, he said, “A technical committee will visit the camp, evaluate the reconstruction cost and determine the restoration and construction priorities” and the cost will be jointly covered by the PLO, the UNRWA, the Syrian government and some international parties such as the European Union.

The Popular Front for the Liberation of Palestine central information officer Anwar Raja told Al-Monitor that the Syrian decision to allow refugees to return to the camp sends a political message to the United States about preserving the symbolic character of the camp for the refugees at a time when the Donald Trump administration is hurting the Palestinian cause by cutting funds for the UNRWA.

However, this wave of optimism among some Palestinian refugees is balanced by skepticism among others.

Mahmoud al-Shawish, 70, left the Yarmouk refugee camp in the Gaza Strip in 2012. He told Al-Monitor, “Returning to the camp is just impossible, especially considering that security needs to be restored there while living and housing requirements are still to be secured.”

Ayman Abu Hashem, who left the camp in 2012 and currently resides in Turkey, told Al-Monitor, “The Syrian regime decision allowing the return of refugees to the camp is an unrealistic political statement. When 80% of the Yarmouk camp is destroyed, it is simply impossible for refugees to return due to the lack of habitable houses. Half of the Yarmouk camp residents currently reside outside Syria and are reluctant to return.”

He added, “The regime might allow some families to return for show and to convey the message that it has completed the task of allowing refugees to return.”