The camp had been the focus of fighting and seizure by Islamic State and Syrian government forces. 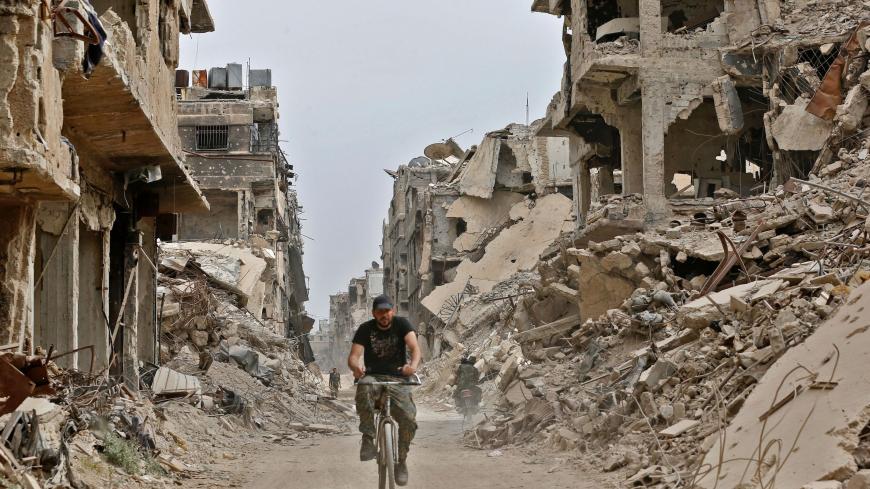 A member of the Syrian pro-government forces rides a bicycle through a damaged street in the Yarmouk Palestinian refugee camp on the southern outskirts of the capital Damascus on May 22, 2018. - LOUAI BESHARA/AFP via Getty Images

Jazaerly set out conditions for those who want to return: The houses they are returning to must be safe or require only minor renovation, and whoever wants to return must prove ownership of the property and obtain approvals from the security authorities.

In November 2018, the Syrian government tasked the Damascus governorate with “infrastructural renovation and provision of basic services to Yarmouk camp to pave the way for the return of the displaced.”

Hussein Chahabi, a Palestinian doctor who works for the United Nations Relief and Works Agency for Palestinian Refugees in the Near East (UNRWA) and currently lives in Dahiyat al-Assad suburb in south Syria, expressed joy at the prospect of returning home to Yarmouk in south Damascus.

“I am excited to return to the camp and renovate my house. I have high hopes for an imminent return home to Felasteen [Palestine] Street [in the camp],” Chahabi told Al-Monitor.

Elissar Mawed, a volunteer and humanitarian activist in Syria, is also excited. She told Al-Monitor, “I hope we can return home soon to Yarmouk camp, but the decision still requires other steps related to infrastructure work and the provision of basic services like water, electricity and health services.”

But Ayham Hamada will not be able to return to Yarmouk. He told Al-Monitor, “Returning is limited to the inhabitants whose houses are safe or can be renovated. My house is totally destroyed, a pile of ruins. Still, I am happy that others are returning to their houses, because that will alleviate their financial strain.”

He added, “All inhabitants support the return to the camp, but this requires provision of infrastructure and basic services. If these are provided, all inhabitants will support a quick return.”

Political director of the Palestine Liberation Organization Anwar Abdul Hadi told Al-Monitor, “In a few days, the inhabitants of Yarmouk will receive a form to fill and submit to the municipality of Yarmouk camp.” Each person must show their property ownership papers and inspect the place and the owner is responsible for renovation costs, he explained.

Abdul Hadi added, “In the past few years, the camp inhabitants have been eager to renovate their houses and return to them, since they were paying high rents in the houses they were living in.” He noted that the Syrian government cannot currently contribute to funding the renovations. The PLO is also facing tough economic circumstances but will try to help in cooperation with the UNRWA, he said.

Abdul Hadi noted that 400 families remain in Yarmouk camp since before the fighting. He added that the gradual return of inhabitants could breathe life back into the camp, specifically the central area between Yarmouk and Felesteen Streets that was the least damaged in the fighting.

Abdul Hadi said that the Syrian government has comprehensive plans to rebuild Damascus and the areas that were hit hard by the war, including the Yarmouk camp. But economic sanctions and a tight siege have delayed these plans, as they include a ban on construction materials.

Abdul Hadi praised the decision of the Syrian authorities and said that its motivation is political, as the camp represents the Palestinan cause and Palestinians' right of return as the region undergoes rapid changes such as increasing normalization with Israel. He added that Syria's position on residents' return to the camp has been reassuring for the Palestinian leadership since the day of its liberation.

On Sept. 15, 2018, Syria's General Authority for Palestinian Arab Refugees oversaw the removal of rubble from Yarmouk camp. The body indicated at the time that 40% of the camp's buildings were livable.

Yarmouk is among the largest of Syria's 15 Palestinian refugee camps. Only 10 are recognized by the UNRWA. Yarmouk camp, built between 1953 and 1954, is known as the capital of the Palestinian diaspora. It was home to more than 200,000 Palestinian refugees before the displacement began in December 2013.

Fierce battles took place in the camp after the Islamic State seized over 90% of it in April 2015. The organization kept control for three years until the Syrian army liberated it on May 21, 2018.

Khaled Abdul Majid, the Syria-based leader of the Palestinian Popular Struggle Front, told Al-Monitor that 100,000 people are expected to return to the houses that suffered minimal damage.

Five years after IS took control of Yarmouk and two years following its liberation by the Syrian army, many of its citizens will finally resume their lives. This step could pave the way for the more challenging phase of restoring the heavily damaged areas of the camp and rebuilding the houses that were reduced to rubble, allowing the rest of the residents to return as well.