Clashes between IS, Jabhat al-Nusra spell despair for Yarmouk residents 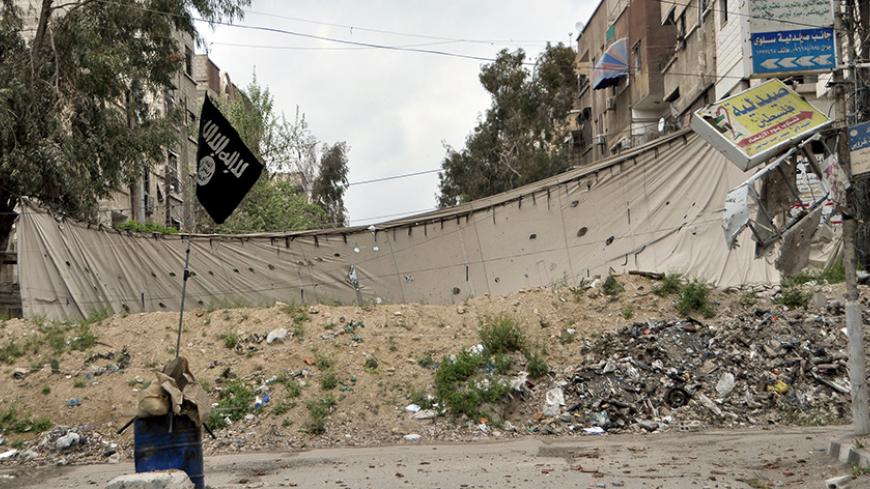 An Islamic State flag is seen near a barricade that serves as protection from snipers from forces loyal to Syria's President Bashar al-Assad, on Yarmouk Street, the main street of Yarmouk camp, April 10, 2015. - REUTERS/Moayad Zaghmout

The fighting that broke out between Jabhat al-Nusra and the Islamic State in Syria's Yarmouk refugee camp two weeks ago is compounding the already dire situation for several thousand families still inside the camp and many more previously displaced to the surrounding areas of Yalda, Beit Saham and Babila. The fighting that erupted on April 7 in what was once Syria's largest Palestinian refugee camp has placed several thousand civilians amid the frontline clashes between the two militant groups.

Since July 2013, Yarmouk has been under seige by Syrian government forces, purportedly due to the presence of rebel factions inside the camp, resulting in civilian deaths from starvation and lack of medical supplies, according to a report by the UK-based Action Group for Palestinians from Syria. Hundreds of Palestinians were reportedly detained, disappeared or tortured to death by the security services. In April 2015, IS militants briefly gained control over much of Yarmouk, with the help of Jabhat al-Nusra, but the two jihadist groups have since turned against each other. Palestinian factions in the camp are divided between the pro- and anti-government camps.

Following the latest outbreak of fighting, activists created the hashtag #yarmoukcampisburning after IS reportedly began burning down civilian homes. The message in general, however, also communicated the longstanding sense among the activists that the plight of Yarmouk, which has seen bombardment, siege and jihadist occupation since 2012, has often unfolded without attracting significant interest from international media.

An April 18 statement by the Jafra Foundation, a local organization from Yarmouk that has been based outside the camp since IS entered Yarmouk last year, reported that civilians were facing "even more severe constraints" as a result of renewed fighting. "Families inside Yarmouk … are completely reliant on humanitarian organizations to provide them with their basic need," Jafra said. According to Jafra operations manager, Osama Moussa, sniper fire has killed at least seven civilians and wounded several others during the latest round of clashes. Among the dead are two children.

Hisham al-Zawawy, a member of the camp’s civil committee, reportedly died on April 16 after being shot in the head near his home. Moussa told Al-Monitor, “Hisham was killed by a sniper, but also because there were no medical facilities available.” Residents are now calling for cease-fires to allow for much-needed supplies to enter the camp.

Before the latest clashes began, the United Nations Relief and Works Agency had been able to sporadically deliver aid to Yalda, a rebel-controlled area just east of Yarmouk, through coordination with the Syrian government. Since February, UNRWA had conducted 21 humanitarian missions to Yalda, providing food parcels and other items, such as blankets and hygiene kits. There have been no such missions since the latest clashes began.

UNRWA spokesperson Chris Gunness told Al-Monitor that past aid deliveries to Yalda had “significantly alleviated the shortages of food,” partly because refugees still inside the camp were able to walk to a checkpoint between Yarmouk and Yalda to collect supplies. He added, however, “The outbreak of fighting has already caused UNRWA to suspend humanitarian missions to Yalda this week [mid-April]. As long as the fighting continues, these missions will remain suspended.”

Beyond Yarmouk's immediate tragedy, the renewed fighting raises questions about the future of the camp. Speaking from a rebel-held neighborhood close to Yarmouk, Abdullah al-Khateeb, an activist who was forced to leave the camp last year, told Al-Monitor, “Water supplies, education and medical assistance have stopped,” leaving civilians to bear the brunt of the latest violence. “Currently, IS wants to take control over the whole camp. Beyond that, we do not know what’s next.”

On Dec. 24, the BBC reported that the United Nations was monitoring an inter-factional deal that would allow thousands of rebels and their families to safely leave Yarmouk and allow civilians trapped there to receive aid. The same day, the Syrian Observatory for Human Rights (SOHR) reported that buses had started arriving in the nearby al-Qadam neighborhood, west of the camp, although it remains unclear if any fighters were actually evacuated. IS maintains a significant presence in Yarmouk, estimated around 2,000 fighters, according to activists.

“Nobody knows what IS' goals or motives are behind the latest clashes,” said Musab Balchi, an activist who now lives outside Syria. “There was a deal between the regime and IS, moderated by the UN, to allow IS to withdraw from Yarmouk to Raqqa. I believe that if IS can take the camp, very soon afterward the regime will make a deal with IS so that [they] withdraw to Raqqa. Then, the regime can take over Yarmouk.”

Salim Salama, from the Palestinian League of Human Rights–Syria, told Al-Monitor that the latest clashes may actually represent the “final battle for Yarmouk,” part of preparations on the ground for a political settlement in Damascus.

At the same time, he asserted that international organizations, particularly UNRWA, need to focus on protection and advocacy, rather than simply “distributing food packages.” He bemoaned the international community’s failure to provide reliable protection to Palestinians inside and outside Syria displaced since 2011, so that they can “live a life of dignity.”

“The Palestinians who are in Yarmouk are abandoned today, that’s very clear, but so are the Palestinians in Beirut,” Salama said. “The only difference is that some are starving faster than others, some people’s rights are violated more than others.”

Sanaa, a young Palestinian woman, fled Syria in 2012. Because of enhanced visa restrictions in Arab states for Palestinians fleeing the conflict, she was deported back and forth between Egypt and Lebanon before being held for half a year in al-Qanater Prison, north of Cairo. Sanaa eventually reached Sweden last year through Turkey.

“Yarmouk was more like a city than a camp. In Syria [before 2011], being Syrian and Palestinian used to be the same." she said. "I want to return one day. Now, though, everything has been destroyed," Sanaa told Al-Monitor.