Despite talk of negotiations and a breakthrough, the siege imposed by the Syrian regime on the Yarmouk refugee camp in Damascus continues to claim the lives of civilians. 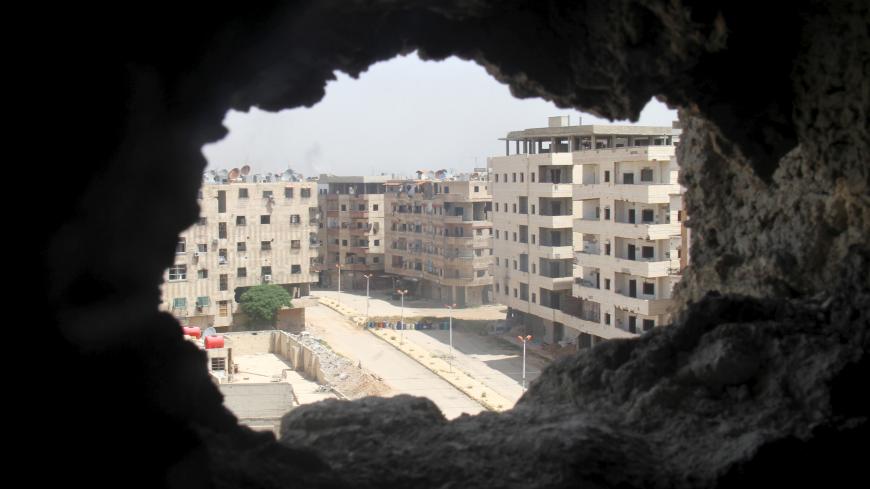 A general view shows a deserted street at the beginning of the Yarmouk Palestinian refugee camp, Syria, April 29, 2015. - REUTERS/Ward Al-Keswani

The first complete siege was imposed by pro-government forces around Yarmouk in mid-2013. The now concentric sieges-within-sieges — by pro-government forces outside and Islamic State (IS) within —encircling what was once Syria’s largest prewar Palestinian community still regularly cost civilian lives. Recent checkpoint closures by rebel groups have only made things worse.

Yarmouk’s remaining civilians — estimated at around 4,500 people, according to the Jafra Foundation — might not be dying of abject starvation anymore, as was the case during the worst of the regime’s siege during 2013-14, one of the Syrian conflict’s earliest and arguably most brutal sieges. On an almost weekly basis, however, civilians succumb to often-treatable conditions because of a lack of proper medical care due to the siege by the Syrian government and its allies. Many of the victims are children and the elderly.

The siege conditions have been made worse by recent clashes between rebel groups and IS, which controls most of Yarmouk and the neighboring city of Hajar al-Aswad. The clashes followed the Oct. 12 announcement in Cairo of a “de-escalation” cease-fire between pro-government forces and rebel groups in four rebel-held areas of south Damascus: al-Qadam (to the west of Yarmouk), and Yalda, Babila and Beit Sahem (to its east).

The purported cease-fire was reached with Russian guarantees, not direct Syrian regime involvement. The four rebel suburbs had been, since 2014, under partial siege by pro-government forces pending reconciliation negotiations following a series of partial truce agreements that year. The Cairo cease-fire agreement did not include IS or the jihadi Hayat Tahrir al-Sham (HTS).

Meanwhile, Iranian-backed militias, including Lebanese Hezbollah, have developed visions for the future of south Damascus, and to achieve them, have begun creating various spheres of influence and strategies in the area. Sayyida Zeinab, on the outskirts of south Damascus, has become a key recruiting tool for them, and some observers claim that both groups want to see Sunni civilians evacuated from the area posthaste according to the so-called Four Towns agreement signed in March. Local activists have been calling it Iran’s “southern suburbs project.”

In response to clashes, Jaish al-Islam intermittently closes the Oroubeh-Beirut checkpoint, which links Yarmouk with neighboring Yalda, putting civilians inside the camp further at risk by restricting access to food and medical treatment. Some reports suggest that this has been done at the behest of the Syrian government, which appears to have either closed or restricted passage through the only checkpoint linking Yalda, Babila and Beit Sahem with government-controlled areas,in response to Oroubeh being opened.

Valerie Szybala, the executive director of the US-based Syria Institute, told Al-Monitor by telephone, “Checkpoint closures definitely lead to a deterioration of conditions, even without these upticks in violence, which happen [in the area] sporadically.” Such deterioration puts even more pressure on civilians already living with partial sieges and dwindling medical assistance exacerbated by recent funding cuts to the main health clinic in south Damascus. Szybala said that since earlier this year, local health workers have been “reducing medical treatment … and running out of supplies.”

Chris Gunness, a spokesman for the United Nations Relief and Works Agency (UNRWA), told Al-Monitor by email that the humanitarian situation in Yarmouk itself remains “dire,” with clashes and checkpoint closures “either preventing food from entering or driving the cost for bread up to 1,000 SYP [$1.90].” The average cost of government-produced bread is usually around 50 Syrian pounds ($0.10).

Some of those suffering under the siege have been allowed to leave the camp. Al-Monitor learned that following appeals by local Palestinian activists and aid workers, an unnamed seven-month-old was transferred to a Damascus hospital for treatment on Nov. 4. According to Yarmouk63, a Palestinian-Syrian media outlet, a young girl was reportedly transferred out of one rebel-held suburb the same day she was accidentally hit by a motorcycle. At least 26 civilians with pressing medical conditions, mostly elderly women, were also permitted to leave HTS-controlled northern Yarmouk for rebel-held areas adjacent to the camp on Oct. 29, according to UNRWA and local Palestinian aid workers.

Such movements are part of an ad hoc system of humanitarian access that can change from day to day and vary by case. The mission of the Palestine Liberation Organization in Damascus sometimes coordinates with the Syrian government to transfer emergency medical cases out of Yarmouk and the rebel suburbs. On the other hand, refugees in Yarmouk can apply for relatives who die outside the camp to be transferred to it for burial. This arrangement has allowed more than 315 Palestinian refugees to be buried in the camp since January 2016.

Still, uncertainty prevails. Earlier this year, Mahmoud al-Fadel, a Palestinian refugee, was repeatedly denied transfer from Yalda to Damascus for chemotherapy for what was quickly becoming a life-threatening cancer. Despite appeals for help from Palestinian activists in the rebel-held suburbs, Fadel died in Yalda in September. Another Palestinian, Marwan al-Saad, recently died of cancer in the southern suburbs due to “difficulties in diagnosing his cancer-type and because the Syrian regime refused to transfer him from south Damascus,” relief worker Obayda al-Masri told Al-Monitor on Nov. 20.

Clashes erupt and dissipate. Headlines about negotiations come and go. This has been the status quo in south Damascus for sometime now. Szybala argues that with Iran having interests around south Damascus and regime, rebels and jihadis doing politicking of their own, not much is going to change for now.

“I don’t think that the [Cairo] agreement itself changed anything … or that there was really an agreement of consequence with the players that matter,” Szybala told Al-Monitor. “Ultimately I think Iran’s interest in this area makes it highly unlikely that there will be any real deal.”