Satire under siege in south Damascus

With the threat of having to evacuate their homes hanging over their heads, activists and artists still manage to produce the satirical web series "Southern Sketch" in south Damascus. 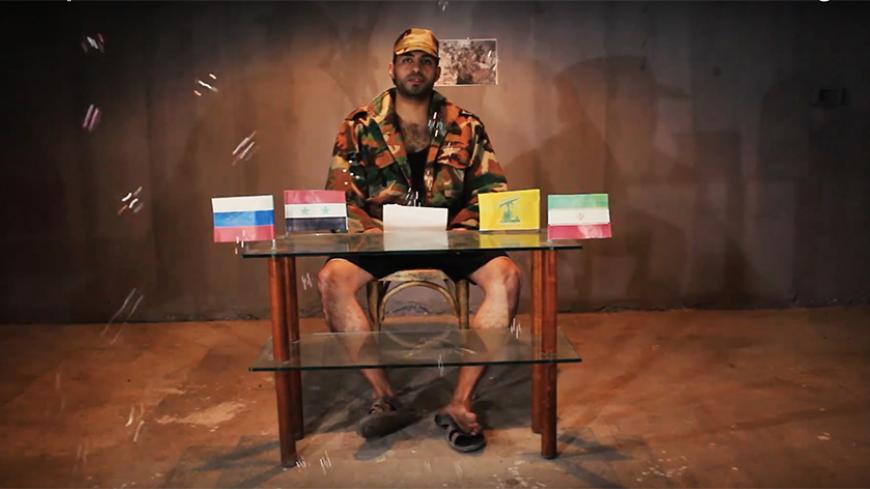 A scene from the first episode of “Southern Sketch,” a satirical web series, posted Jan. 9, 2017, on YouTube. - YouTube/SOUTHERNSKETCH

The video begins with the announcement, “A statement by the chief of staff of the Syrian Arab army.” A serious-looking man in camouflage reads a grandiloquent communique celebrating the Syrian state's victory over “terrorists and takfiris” in eastern Aleppo.

“We call on the sons of the beloved Syrian people to return to the bosom of the nation and the sovereignty of the Syrian state,” he says, before issuing a warning. “We will crush under the feet of the Syrian Arab army’s heroes anyone who tries to undermine the security and stability [of the state].”

The camera zooms out intermittently to reveal that the chief of staff is wearing a vest, shorts and flip-flops. Flimsy printouts of Hezbollah, Iranian and Russian flags sit on the table in front of him, and a photograph of a White Helmets rescue hangs in the background, a reminder of the human cost of “victory.” The speech ends with a small flurry of blown bubbles.

This is a skit from the first episode of "Southern Sketch," a satirical YouTube series launched Jan. 9 by artists, photographers and media activists affiliated with Revolutionary Spring (Rabea' Thawreh), a collective of youth activists living in the last three rebel-held areas of besieged south Damascus — Yalda, Babila and Beit Sahem. The “Southern Sketch” team has been busy while the 42,000 or so civilians in the area anxiously await news of a possible truce that could involve evacuations like those conducted in Daraya, Moadamiyet al-Sham and Wadi Barada.

The five episodes of “Southern Sketch” that the group of actors and musicians, media activists and writers have put together offer snapshots of the Syrian conflict from the ground up. They flit from political satire and news commentary to surrealist black comedy. Threats from the outside are a recurrent theme, to wit, a falling barrel bomb or an imposed evacuation deal.

The series takes real-life tragedies and other events from the Syrian conflict and turns them into high farce, with well-known pop culture references used for comic effect. For instance, inspired by stories of looting by regime forces after the fall of eastern Aleppo, the program's second episode shows Syrian army soldiers searching a building as the theme from the “Pink Panther” plays in the background. When a cautiously advancing soldier comes across an abandoned refrigerator, Celine Dion’s “My Heart Will Go On” begins to play as the enthralled-looking fighter approaches in slow motion. After the soldier takes a quick look inside the fridge, he signals his buddies to come help him steal the fridge. Cue some Middle Eastern music. The soldier turns the light out in the now-empty room. End of scene.

Producing a series in a section of the Syrian capital partially under siege is not always easy, said photographer and “Southern Sketch” director Fares al-Khattab, who moved to the southern suburbs when a government crackdown on university protests forced him to flee his home and abandon his studies in 2012. “The first [problem] is electricity,” Khattab told Al-Monitor by phone. “This area hasn’t had a proper electricity supply in years, so we’ve been relying on burning fuel for power, which is very expensive.” Khattab said the production team uses a series of nine-volt batteries to power spotlights during filming.

There is only one official crossing, the Babila-Meqdad checkpoint, in and out of the three districts. Originally opened as a humanitarian crossing following partial truce deals in early 2014, the checkpoint has become a pressure point in the ongoing standoff between pro-government and rebel forces. Some residents believe the government has manipulated prices and tariffs on goods passing into rebel areas to put pressure on civilians to accept its terms for a truce. According to local media reports, in recent weeks there has been a string of arrests whereby young men are forcibly conscripted at Babila-Meqdad.

The partial siege and security situation, of course, limit what the team for “Southern Sketch” can feasibly do. Props, costumes and other production equipment can be hard to come by. “Because of the strict checkpoints, which often don’t allow things to come through, we’ve had to cancel or postpone episodes in the past,” Khattab said.

Representatives from Yalda, Babila and Beit Sahem have been in talks with government negotiators since October. Contact has been ongoing, yet holdups remain in what Damascus commonly refers to as “reconciliation.” Civilians are fearful of being subjected to the kind of evacuations that have taken place in other Damascus suburbs and the countryside since August.

“It is well known what the regime wants: evacuations and the return of south Damascus to government control,” Khattab said. “The siege on south Damascus has been tough, very tough, and civilians are frightened about the return of regime forces, because [nearby] there are militias with the regime who may arrest them, and there are sectarian militias as well,” Khattab said, referring to the presence of Lebanese Hezbollah and Iranian-backed Shiite militias around southern Damascus and the nearby Shiite mosque and shrine of Sayyida Zeinab.

“The latest regime initiative in [truce] negotiations called for the removal of the Free Syrian Army [FSA] from south Damascus and its return to government control,” Khattab said. “Civilians have become more scared in recent months.”

Against the odds, “Southern Sketch” is the latest output from a lively civil society movement that may disappear once a deal is struck with the government. Revolutionary Spring has for years regularly churned out news bulletins, video features and photography. It also publishes an Arabic-language magazine online, alongside limited print runs distributed in south Damascus.

“Our revolutionary movement is continuing to work in Yalda, Babila and Beit Sahem, but if … there’s a deal with the regime that states that the FSA must leave, I will have to leave too,” Khattab said. “We can’t stay. Maybe the Assad regime will arrest us. If it happens [in south Damascus], as in Wadi Barada, Daraya or Moadamiyet al-Sham, we will leave.”

With the threat of evacuation hanging over south Damascus, rebel fighters and activists, human rights defenders and other civilians are approaching life day by day. Their lives may at some point come to be defined as before the deal and after the deal.

“Our revolutionary movement is continuing for now,” Khattab said. “All we can do is just carry on our work until the end — that’s it.”