New "de-escalation" initiative presents new status quo for south Damascus suburbs, but how will it work? 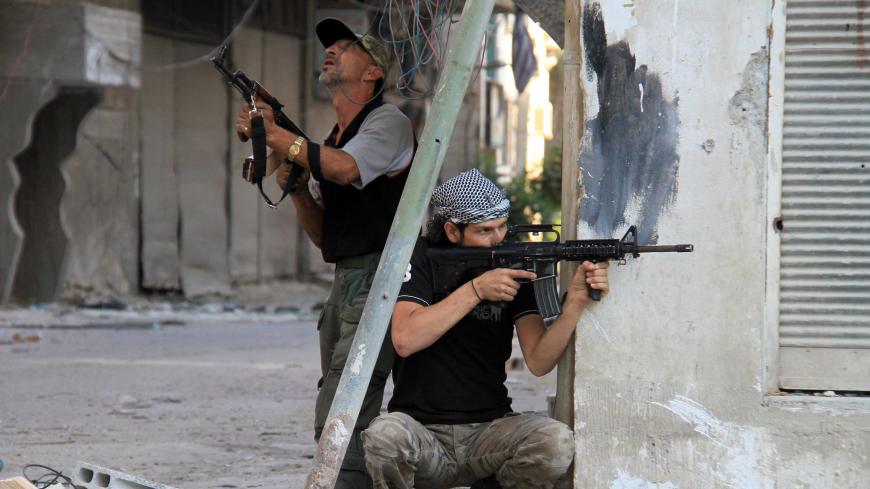 Rebel fighters hold a position on a front line in the Damascus suburb of Yalda, Syria, Sept. 18, 2013. - WARD AL-KESWANI/AFP/Getty Images

The last remaining rebel-held suburbs of south Damascus may soon fall under a new "de-escalation zone," according to a tentative agreement announced by rebel representatives in Cairo on Oct. 12.

Alloush described the agreement as “preliminary,” but added that it would “provide for the continued opening of crossings in the south of the capital … to allow in humanitarian aid,” and protect against forcible displacements in areas where the deal was implemented.

The agreement, which was signed by Jaish al-Islam, another rebel faction and a Hamas-affiliated Palestinian militia originally from Yarmouk camp, took effect at noon Cairo time Oct. 12.

The new deal would impose a de-escalation zone in south Damascus, similar to the ones formed in the wake of the international agreement signed in the Kazakh capital, Astana, in May. The deal set out tentative cease-fires in four — mostly rebel-controlled — areas of the country with Russia, Turkey and Iran acting as guarantors.

There was no mention in the deal of two other districts of south Damascus, Yarmouk camp and Hajar al-Aswad, which remain under the control of Hayat Tahrir al-Sham and the Islamic State (IS). On Oct. 13, Syrian jets launched at least 14 airstrikes on IS-controlled Hajar al-Aswad.

And the incredibly complex state-of-play in and around the last rebel-held south Damascus suburbs could pose problems in the future, said Valerie Szybala, The Syria Institute’s executive director.

“The regime was not part of the talks in Cairo, so its reaction will be important in determining how things play out,” Szybala told Al-Monitor on Oct. 12. “Given Iran's interest in this geographical area, I imagine it is a place where they [with the regime] would be willing to challenge or undermine a deal made by Russia that they don't like.”

She added, “Many of the armed opposition groups in the southern suburbs were not part of the negotiations either, so there is the potential for them to create issues as well if they decide at some point that they don't like it.”

Rebel groups, despite signing partial truces with the regime in 2014, still control four areas of south Damascus: al-Qadam in one pocket, and Yalda, Babila and Beit Sahem in another. Only three local rebel forces signed the Oct. 12 document in Cairo.

Prior to this latest announcement, the fate of south Damascus hung in the balance.

An imminent evacuation deal meant to remove hundreds of rebel fighters from the most isolated of the last rebel-held suburbs of Damascus, al-Qadam, was postponed without explanation in late September.

That deal was supposed to see evacuations from al-Qadam to either Idlib or Jarablus in Syria’s north. However, on the day evacuations were set to begin — Sept. 26 — al-Qadam’s local council said the deal had been “postponed until further notice.”

A source at al-Qadam's local council told Al-Monitor last week that evacuations had indeed been “delayed,” albeit for “unknown reasons.”

Local activist and journalist Mattar Ismail told Al-Monitor that IS had “threatened to bomb [al-Qadam] if people tried to leave,” while Lebanese Hezbollah made its own threats “to stop the convoy and arrest people, to advance its demand to get families of fighters out of Kefraya and Fua.”

South Damascus neighborhoods had previously been included in the “four towns agreement” negotiated between rebels, Qatar, Iran and Iranian-backed Hezbollah in late March. That agreement connected the fates of four besieged towns — Fua and Kefraya in the north besieged by rebel and jihadi groups, and Madaya and Zabadani in the southwest besieged by Hezbollah — so that evacuations from one pocket would be replicated in another.

Under the deal, south Damascus was given a formalized nine-month cease-fire beginning March 28 that would have run out in two months.

Ismail said that those two months would have been “critical in deciding the future of Damascus,” before adding that the Oct. 12 announcement “sets out a cease-fire to stop military clashes with the regime, with terms and conditions — that are very clear — to give the regime authority in [south Damascus] again and the opportunity to control the area.”

The Syrian government has long-attempted to “regularize” the status of civilians and fighters in south Damascus through “reconciliation” — regime-speak for a slew of truces that are usually followed by sieges and forcible evacuations. Some suggest the agreements are in contravention of international law.

While fighters and civilians in al-Qadam were due to be evacuated, in Babila, Beit Sahem and Yalda the regime has previously tried to negotiate for fighters to join a pro-government militia force tasked with providing local security. Negotiations in the three villages have been ongoing since October 2016 without tangible results.

Almost every actor involved in the Syrian conflict is now in some way engaged in the south Damascus suburbs. The regime negotiates with the rebels. Hezbollah and Iranian-backed militias, stationed around the nearby Sayyida Zeinab shrine, use the hugely symbolic Shiite site as a rallying cry for their own interests in Syria and a staging post for influence in the city’s south. Northwest Yarmouk is under the control of a small Hayat Tahrir al-Sham force that is besieged by an IS contingent still controlling much of the camp and neighboring Hajar al-Aswad. The force was previously known as Jabhat al-Nusra.

“In a sense, the southern suburbs enclave is a condensed window into the complex nature of Syria. It distills down the essence of how there are no clear rules,” Szybala said.