Fighters from Hayat Tahrir al-Sham, a former al-Qaeda affiliate, are leaving Syria’s largest Palestinian refugee camp as per a deal with the regime, although the residents do not seem so enthusiastic. 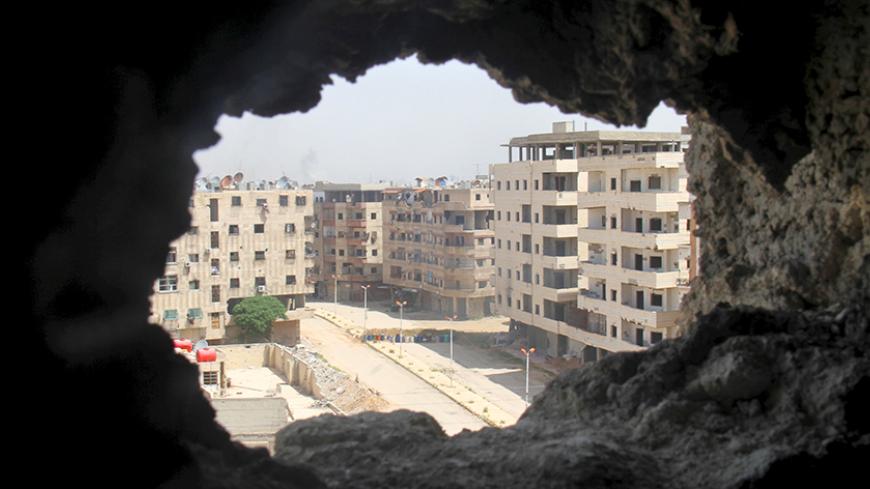 Fighters from jihadi groups inside the Yarmouk camp in south Damascus are preparing to leave what was once Syria’s largest camp for Palestinian refugees, according to local activists and monitoring groups.

Islamic State (IS) militants currently stationed in Yarmouk and the group’s Damascus stronghold in neighboring Hajar al-Aswad may be preparing to leave Yarmouk under a landmark agreement with the Syrian government, just two weeks after the first fighters from Hayat Tahrir al-Sham, formerly known as al-Qaeda’s Syrian affiliate Jabhat al-Nusra, left the camp.

The UK-based Action Group for Palestinians of Syria reported May 23 that “on-the-spot observers in Yarmouk … said IS militias have been evacuating their sites in the area,” ahead of a possible deal with Damascus to head to Raqqa.

On May 7, the first batch of an estimated total force of 200 Hayat Tahrir al-Sham fighters left northern Yarmouk in a line of slow-moving ambulances as seen in photos shared by pro-government media and local activists.

All Hayat Tahrir al-Sham fighters are expected to be transferred out of Yarmouk as part of a wide-ranging truce deal that was negotiated — with Qatari mediation — between Hezbollah and Salafi rebel groups earlier this year.

But tensions back inside the camp have not been this high in months. Media activist and photographer Hamada Hameed, who lives in an area close to Yarmouk, told Al-Monitor, “Fear is on people’s faces — especially after the first Jabhat al-Nusra [fighter] evacuations.”

He added, “Some have been expecting a major war between the regime and IS over areas that were under the control of Jabhat al-Nusra if IS does not leave in the coming days.”

Now, there is some speculation — and concern — about what comes next.

“Yarmouk is waiting for … implementation of the agreement and the departure of the rest of the fighters of [Hayat Tahrir al-Sham] and the emptying of areas under its control,” Ahmad Hossein, the executive director of Action Group for Palestinians of Syria told Al-Monitor.

“[But] what is happening now is the complete emptying of all elements hostile to the regime — a phased evacuation,” he said. “And I believe that the Yarmouk camp and all of the southern front [of Damascus] has been almost settled in favor of the regime and soon the Syrian flag will fly again in the south.”

Yarmouk has been an active part of the conflict in south Damascus since Dec. 16, 2012, when a government warplane bombarded the camp for the first time, killing dozens of civilians. Rebel forces entered Yarmouk the next day before pro-government forces introduced a partial and then complete — and crippling — siege on the camp in 2013. Enforced by the Syrian army and pro-government forces including the Popular Front for the Liberation of Palestine - General Command, the siege would claim the lives of at least 182 people — either as a result of actual starvation or lack of access to medical care.

In April 2015, IS entered Yarmouk with the connivance of its then-local ally Jabhat al-Nusra. Since, Jabhat al-Nusra and later IS left their own marks on Yarmouk, executing relief workers and human rights defenders, enforcing strict interpretations of Sharia, while scuppering attempts to negotiate a way out of the siege. The former allies since broke, and street clashes between the two groups have put hundreds of civilians in the line of fire.

Up to 5,000 civilians still living inside areas of Yarmouk have done so amid a siege, fierce street clashes and lack of access to even the most basic supplies including running water, electricity and — in some cases — bread.

But is there any guarantee that Yarmouk’s immediate future will be any more certain?

“I don’t think this removal will make a big change; the camp is destroyed and it being controlled by the government or another side from the Palestinian organizations will not make much difference,” said Palestinian-Syrian refugee Zahia al-Alouh, speaking to Al-Monitor from Sweden.

Alouh said she “hopes for the best,” but is expecting more fighting in and around Yarmouk.

The southern suburbs of the Syrian capital remain awash with checkpoints and flags representing almost every factional stripe and color currently fighting on the ground in Syria — sometimes at opposite ends of the same street. The camp itself is besieged by the Syrian army, the Popular Front for the Liberation of Palestine - General Command and other pro-regime militia groups, while the nearby Sayyida Zeinab mosque and shrine has been used as a rallying call by Lebanese Hezbollah and Iranian-backed sectarian militias.

To the east of Yarmouk, predominantly Islamist rebel groups dominate the remaining rebel-held areas in the “three villages” — Yalda, Babila and Beit Sahem — which have been at partial truce with the regime since 2014.

IS’ final foothold in Damascus is in Yarmouk and Hajar al-Aswad, a historically working-class and conservative Sunni neighborhood just south of the camp.

That local geography might present difficulties for Palestinian refugees and former Yarmouk residents who have been displaced either to neighboring districts or beyond. Although PLO Syria envoy Ahmad al-Majdalani did not respond to requests for comment, he told Al-Monitor in mid-May that with Hayat Tahrir al-Sham and IS militants still in and around Yarmouk, the situation remains complicated.

On April 16, PLO factions inside Syria celebrated news that Palestinians from other camps — namely Sbeineh in Rif Dimashq — might be able to return to their homes in the near future. The statement from PLO factions welcomed “measures taken by the Syrian government to facilitate the entry and exit of residents to and from Khan Eshieh camp,” while also “confirming their support for talks to reach an agreement … in Yarmouk.”

Activists and former Yarmouk residents who fled regime bombardments and arrest campaigns might question those measures, let alone question how genuinely the Syrian government will facilitate the movement of residents in and out of camps or protect civilians in the future. There has been talk of returning Palestinians to Sbeineh for some time now, while reports of arrests and enforced conscriptions in Khan Eshieh have emerged since pro-government forces took back control of the camp late last year.

For some, the damage has already been done. Tens of thousands of Palestinians have already fled the tattered streets of a bustling, well-integrated camp often dubbed the “capital of the Palestinian diaspora.” It is unclear how many will return, or when.

“Coming from Yarmouk was more like a nationality: There were people who didn’t even know what the outside of the camp looked like. The people who came from [Yarmouk] were always more committed to the Palestinian cause — more than those who lived in Palestine,” said Alouh.

“It wasn’t just a capital, it was my own Palestine,” she concluded.