While the return of civilians to Damascus’ Sbeineh refugee camp has already begun, the road to full recovery for these camps remains long. 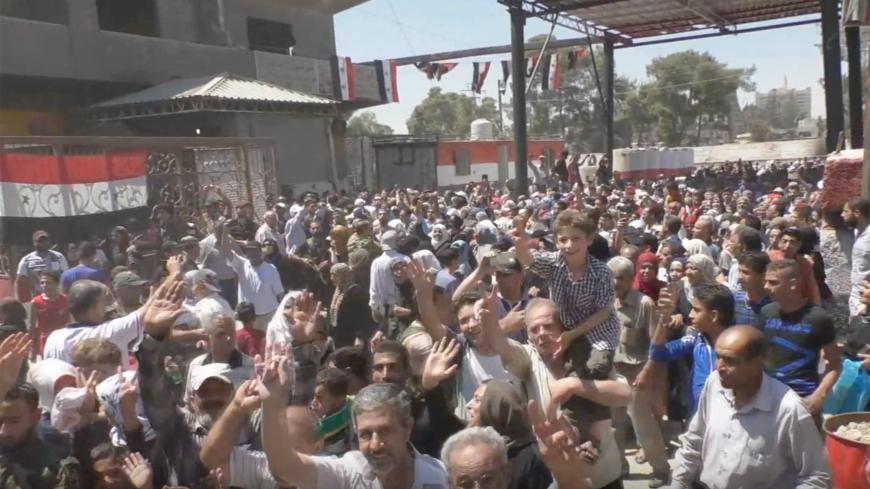 BEIRUT — Palestinian refugees from the Sbeineh refugee camp in Rif Dimashq, Syria, started returning to their homes last week, some four years after the Palestinian camp was devastated by war and then shuttered by the Syrian army.

The Syrian army retook the town of Sbeineh from rebel groups in November 2013 after a fierce military campaign that battered the town and the Palestinian camp of the same name, leaving homes in tatters and infrastructure in ruins. The camp remained closed to civilians since then, with front lines in Daraya and south Damascus that were active until recently just a few miles away.

But on Aug. 27, Palestinian-Syrian community Facebook pages began sharing videos and images of crowds pouring into Sbeineh camp accompanied by Syrian soldiers. There was an air of celebration, the sound of women ululating as they passed beneath the camp’s concrete gates.

Civilians had been permitted by Minister of State for National Reconciliation Affairs Ali Haidar and military officers to re-enter the camp and assess their properties — the first time civilians had gone inside Sbeineh since 2013.

Rif Dimashq Gov. Alaa Mounir Ibrahim was quoted by state news agency SANA on Aug. 27 as saying that Sbeineh’s civilians would be allowed to start returning to their homes on Sept. 1, marking the first day of the Eid al-Adha holiday. However, returns actually began two days earlier. Al-Monitor has heard that family members of martyrs and active servicemen, as well as state employees, will be among the first to move back inside Sbeineh.

The semi-official Facebook page of the National Reconciliation Committee in Sbeineh has claimed that 400-500 families have registered to return to the camp with the government’s reconciliation committee already, although this was not possible to independently verify.

With its reopening, Sbeineh has become one of just a handful of displaced Palestinian communities allowed to return to their homes since 2011, following years of fraught negotiations and pleas from former residents. In February, SANA quoted Haidar as saying that Sbeineh “families will return in [a] few days, and that later all displaced people will be able to return to their home areas with no exceptions.” Khaled Abdul-Majid, the secretary of the pro-regime Palestinian Revolution Factions Alliance in Syria, earlier this year told Al-Monitor that Palestinian figures had lobbied state authorities “to accelerate the process and have people immediately return.”

Similar statements have been made sporadically by officials and pro-regime Palestinian figures during the four years since Sbeineh’s recapture, on the one hand celebrating its “return to stability” while at the same time citing security reasons and a lack of services on the ground for the delay in rehabilitating residents.

During that time, internally displaced Palestinians were forced to live in areas with high concentrations of Palestinians — some of which, like Qudsaya, northwest of Damascus, were themselves drawn into conflict and later besieged by pro-government forces. Many refugees instead crossed the border into Lebanon and, at one point, the London-based Action Group for Palestinians of Syria and the Palestinian Return Center estimated that some 8% of all Palestinian-Syrian refugees residing in Lebanon hailed from Sbeineh.

Despite the official fanfare inside Syria, not all Palestinian refugees remain hopeful that they will be able to return soon.

“I felt real joy to see that the people of Sbeineh returned,” said Umm Wael, a Palestinian refugee from Sbeineh in her 60s who now lives in south Lebanon’s Ain al-Hilweh camp. “I always wanted to go back, but then I think, ‘What would I be returning to?’”

After Aug. 27, Umm Wael telephoned former neighbors inside Syria who had re-entered the camp. “They went, checked on their homes and mine, and then left again. My house had been taken over and was badly damaged, and it will take a lot of money to make it right again. Aside from that, rents are very expensive for people there now.”

UNRWA, the UN relief agency for Palestinian refugees, plans to resume services following a July 18 mission inside the camp to assess needs and service gaps. However, there are delays.

Even so, Sbeineh will likely form an important case study that speaks of the uncertain future status of Palestinian refugees in Syria. Some Palestinian camps — including northern Aleppo’s Handarat — have either been completely or almost completely destroyed since 2011, while Yarmouk, once the country’s largest Palestinian community, remains under siege with a messy mix of Hayat Tahrir al-Sham and Islamic State (IS) militants present on the ground.

The Syrian government remains adamant that Yarmouk will see a similar fate to Sbeineh, and Haidar has repeatedly claimed that civilians will be allowed to return to Yarmouk soon with negotiations well underway to evacuate between 100-200 Hayat Tahrir al-Sham fighters and a larger IS contingent.

One of the first Palestinian communities that was displaced and then returned with government permission was Hosseinieh in the southeastern Damascus countryside. Civilians and UNRWA services started trickling back in August 2015.

But former Hosseinieh resident Abu Diab, now living in one of south Lebanon’s Palestinian camps, said that a return can depend on much more than regime approval.

“Houses [in Hosseinieh] are completely destroyed and need to be repaired, maintained or purchased again,” he said. “The other problem is the economy, because a lot of the jobs in decorating or carpentry or welding and so on are not available, so most people find they have to enlist as conscripts to secure a living for their families.”

The risk that security personnel or informants may have “written reports about people who have left Syria, containing claims that they have dealt with … enemies of the regime” will also stop some Palestinians from returning for now, claimed Abu Diab, who is himself not intending to go back to Hosseinieh just yet.

While the return of civilians to Sbeineh might appear to end one chapter in the story of the post-2011 Palestinian-Syrian catastrophe, low UN resources, widespread destruction of homes and refugees’ own concerns about their futures will likely mean the camps will not return to their former selves for many years to come.