New regulations could put an end to legal challenges faced by Palestinian-Syrian refugees who have, in some cases, gone to extreme lengths just to get hold of even the most fundamental legal documents. 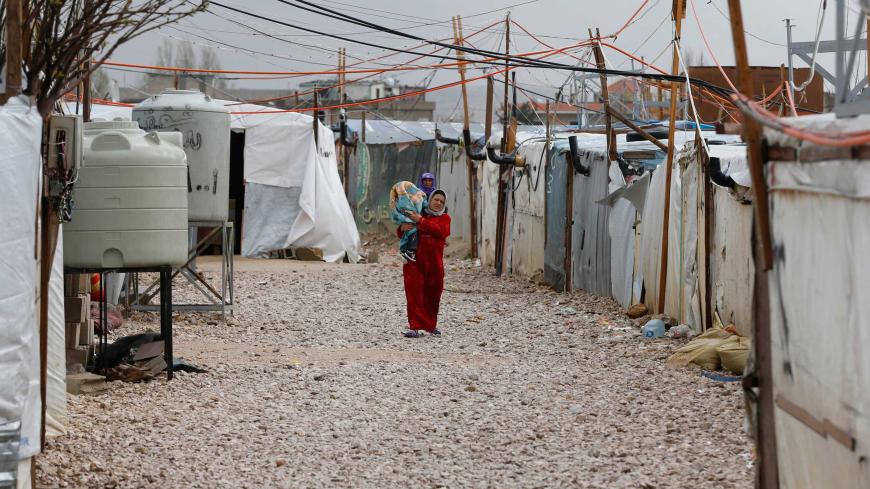 LONDON — There they were, the three of them on the Lebanese-Syrian border. Umm Ibrahim (not her real name), her husband dying of cancer and their little boy, Saeed, stateless since the day he was born in Lebanon. The Palestinian family originally from Syria’s Yarmouk camp had been unable to register the birth of Saeed two years after he was born in Lebanon. Their last hope was to take him to Damascus.

“General Security refused to fix the husband's residency and they refused to register his child’s birth,” Umm Ibrahim's sister, Soheir, told Al-Monitor from her new home in Lebanon’s Bekaa Valley in September. “By then the boy was 2 years old. His father didn’t have residency … so it was impossible.”

The family was stuck in a vicious circle of irregularity, the kind that has regularly impacted Palestinian refugees from Syria who fled to Lebanon after the start of the Syrian civil war in 2011.

Soheir’s family, like other Palestinians, saw Syria as the only way out. They would go there to get cancer treatment for Saeed’s father and register the birth of their son.

“They had gone to the border by car — my sister’s husband was very sick at this point, he really looked like he was dying — [and] the authorities refused to let him cross unless he paid $800 because he should have renewed his residency papers four years ago,” Soheir said.

A final farewell. Saeed’s father would pass away just a couple of weeks after they had managed to drum up the funds to re-enter Syria in August. Saeed was still stateless, now without legal status or a father.

Umm Ibrahim had to bribe a midwife in Damascus to falsify papers stating that her son had been born in Syria two years ago and had not been able to reach Syrian government offices since then to register his birth. They created a backstory and paid the mid-wife tens of thousands in Syrian currency to make it more believable.

“A midwife produced a fake birth certificate and got paid 25,000 Syrian pounds [$48.45] for it,” Soheir said. “Then the midwife told [Umm Ibrahim] to go to the municipality and then the police to get this approved, to show that Saeed was born in Syria.”

Umm Ibrahim and her son have since stayed on in Damascus, unable to re-enter Lebanon and rejoin the rest of the family legally.

The story, recounted by Soheir last month in their Bekaa Valley home, communicates just how precarious legal status has become for Palestinian-Syrians in Lebanon — forcing some refugees to use bribes, fake documents and people smugglers to complete what should be simple processes like registering a newborn child or a relative who has passed away in the diaspora. Others simply live in protracted irregularity, unable to move around or find work.

Abu Hameed (not his real name) crossed irregularly from Syria into Lebanon just over a month ago, using a smuggler he met in a cafe near the border who then hustled him and a group of other refugees across the mountains by night.

“My plan was to come here to start a family and begin working, but I have been shocked by the situation here,” the Palestinian, originally from Joubar in eastern Damascus, told Al-Monitor. “I’m stateless … I don’t have residency. And because I don’t have residency, I can barely even leave this house. I can’t move around or find a job.” (Abu Hameed preferred not to reveal where he was staying.)

Under Lebanon’s residency rules, refugees from Syria who did not enter the country legally — i.e., through an official border crossing — cannot get residency. The United Nations Relief and Works Agency for Palestine Refugees in the Near East (UNRWA) estimates that approximately 40% of all Palestinian-Syrians now in Lebanon entered irregularly, a UNRWA staffer told Al-Monitor.

Without residency and the legal rights it should provide for registering his unborn children, what kind of future awaits Abu Hameed and his family in waiting?

However, there are hopes that all that could be about to change. Under new rules issued by the Lebanese Ministry of Interior’s Directorate for Personal Status, Palestinian refugees from Syria will now find it easier to legally register marriages or the birth of their children in Lebanon.

An Oct. 5 memorandum has brought Palestinian refugees from Syria under the same rules as Syrian refugees, following another memorandum for Syrians issued by the Ministry of Interior in September.

May Hammoud, a legal officer at the Lebanese-Palestinian Dialogue Committee (LPDC) established in 2005, said the change was a result of lobbying from the LPDC and it will change Palestinian-Syrians’ lives for the better.

“[This memorandum] clarifies the documents required and simplifies the procedures,” Hammoud told Al-Monitor on Oct. 18, explaining that Palestinian-Syrians can now register marriages when only either a husband or wife has legal residency and register births without either parents having legal residency. “We felt that the priority was to tackle the legal challenges faced by Palestinians from Syria, and one of those priority legal challenges … was the registration of marriages and births.”

The new regulations follow a similar memorandum focused on Syrian nationals in Lebanon that was passed on Sept. 12.

Still, challenges remain. According to a study released last year by the UNRWA and the American University in Beirut, some 90% of Palestinian-Syrians in Lebanon live below the poverty line — a much higher figure than other displaced communities — with 9% of that figure living in absolute poverty.

Abu Firas, a refugee from Yarmouk who has helped establish a network of relief committees in the Bekaa Valley for vulnerable Palestinian-Syrians, told Al-Monitor that Lebanon’s residency regulations have created different legal statuses within the same family unit.

That could really start to present problems — not now, but in the future, he said.

“These kinds of cases are only creating problems for the families in the future; for example, if they were going to get a resettlement procedure or family reunification or whatever,” he said. “You might have a family that has a child born in a Lebanese hospital, and at the same time that child is carrying a document saying they were born in Syria. Let’s say they go for a resettlement interview … they’re going to face complications.”

While Lebanon’s new regulations will end that vicious circle of irregularity for some, in the case of other families the damage has already been done.

Umm Ibrahim — widowed and bereaved — is now stuck in Syria, and dangerous, untrustworthy border smugglers are her only route back to rejoin the rest of her family in Lebanon.