The crisis in the Yarmouk refugee camp, which emerged after the Islamic State took control of the camp, reveals the weakness of the PLO, as the responsible party to handle the situation of Palestinian refugees around the world. 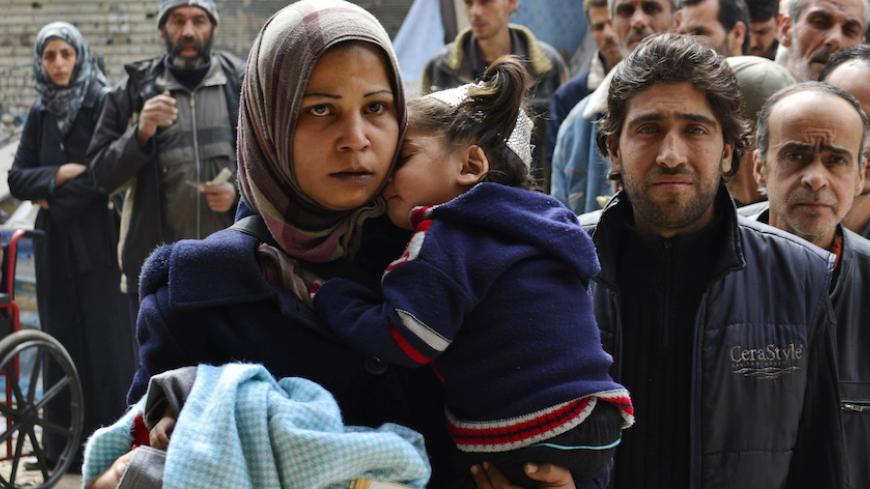 Residents queue up to receive humanitarian aid at the Palestinian refugee camp of Yarmouk, in Damascus, March 11, 2015. - REUTERS

RAMALLAH, West Bank — The crisis in the Palestinian refugee camp of Yarmouk in Damascus has constituted a challenge for the PLO, which has been thus far unable to find a solution for it. According to Anwar Abdul Hadi, the director of the PLO's political bureau in Damascus, the crisis in the camp has deteriorated further following the Islamic State (IS) seizing control of 90% of the camp by the beginning of April.

The PLO’s weakness has been exemplified by the conflicting and confused positions in regard to the required solution for the camp.

Member of the PLO Executive Committee Ahmad Majdalani announced in a news conference April 9 in Damascus that factions in the camp agreed on carrying out a military operation in coordination with the Syrian regime to push IS out of the camp. The PLO issued a statement the same day rejecting any military solution, in contrast with Majdalani’s announcement.

Khaled Abdul-Majid, secretary of the Palestinian Revolution Factions Alliance in Syria, denounced the PLO's conflicting statements and — in a report to Lebanese paper Al-Akhbar on April 17 — accused President Mahmoud Abbas of yielding to pressure on the part of Saudi Arabia and Qatar, which reject Palestinian military intervention in the camp.

The PLO is considered “the legitimate representative of the Palestinian people,” and its Department of Refugee Affairs, headed by PLO Executive Committee member Zakaria al-Agha, is responsible for Palestinian refugees across the world. According to the PLO, roughly 200,000 Palestinians resided in the Yarmouk refugee camp before the Syrian war erupted. Since then, around 18,000 refugees remained in the camp before IS took control of it. The department announced April 5 the evacuation of 2,000 refugees through safe passages, who were then moved to the Damascus neighborhoods that are under the Syrian regime’s control, thus leaving 16,000 Palestinians stranded inside the camp.

Sources from the PLO Executive Committee told Al-Monitor on condition of anonymity that the PLO decided to dispatch a delegation to Syria on April 27. But according to Majdalani, the visit of this Palestinian delegation to Damascus, which was supposed to discuss the Yarmouk crisis, was postponed by a demand from the Syrian government due to the internal situation in Syria. A new date will be scheduled to host the delegation, Majdalani said, without specifying when.

Majdalani told Al-Monitor that after IS took control of the camp, the security and humanitarian situation in Yarmouk camp has become tragic, as IS decided to turn the camp into a central command for attacks on the heart of the capital, Damascus.

“The political solution that we were seeking with the parties controlling Yarmouk has stopped until further notice in light of the collective arrests and killings of refugees, which led us to take swift action and agree with the Syrian government to provide corridors and safe shelters and cater for the essential needs of the displaced refugees,” Majdalani said.

Asked about the PLO's conflicting comments about the agreement reached in Syria, Majdalani said, “The main issue is that the camp is located on Syrian territory and is therefore the responsibility of the Syrian government. It is this government that decides on the way it deems appropriate to maintain the security of the Palestinian and Syrian citizens. It is the Syrian government that decides on the security solution, not us.”

In a sit-in held in front of the PLO headquarters in Ramallah on April 5, Palestinian militants accused the PLO of failing to rescue refugees in Yarmouk.

The Yarmouk refugee camp crisis has started a debate in Palestine about the PLO's responsibility toward Palestinian refugees, especially in light of its weakness and failing attempts to bring about reform in the organization based on the Palestinian reconciliation agreement (Beach Refugee Camp Agreement), which was signed April 23, 2014.

The Palestinian factions had reached an agreement in Cairo in 2005 to form a temporary PLO leadership including Hamas and Islamic Jihad as a first step toward reform. However, 10 years after the agreement, no achievements have been made in this regard.

The Yarmouk refugee camp crisis has brought back to the surface the PLO’s weakness in dealing with the Nahr al-Bared refugee camp in Lebanon, which was destroyed following the fighting that erupted between the Lebanese army and militants of Fatah al-Islam on May 20, 2007.

Omar Shehadeh, a member of the PLO Central Council and leader in the Popular Front for the Liberation of Palestine, told Al-Monitor, “The PLO is failing to protect refugees in the camps in light of the ongoing conspiracy against the Palestinian cause.”

Shehadeh said, “Yarmouk is witnessing a new nakba [disaster] aimed at displacing the Palestinians and eliminating their right of return. Also, the PLO’s application of the US settlement and the Oslo Accord have undoubtedly deprived it of its ability to perform its duty toward refugees and camps. This has also confused the PLO leadership and made it unable to live up to the challenges inside and outside occupied Palestine, hence the current situation in the Yarmouk camp.”

For his part, writer and political analyst Khalil Shaheen said that the PLO no longer has an institutional presence capable of protecting Palestinian communities, especially in areas experiencing bloody disputes and affecting the existence of the Palestinians and their right to exist and live.

Shaheen added, “The Executive Committee members and president seem so far unable to take a clear and precise position concerning the defense of refugees in Yarmouk. … The position taken is still blurry in the absence of a specific vision for the protection of Palestinians in Yarmouk."

Concerning the position that the PLO delegation will take to Damascus, a member of the PLO Executive Committee and the secretary-general of the Palestinian People's Party, Bassam al-Salhi, told Al-Monitor, “The Palestinian position consists of looking for ways to protect our people in the camp through a unified position agreed upon by all factions, be it for the defense of the camp or for other options.”

As the PA dominates the Palestinian decision-making center amid the marginalization of the PLO's role in taking decisions and activating its institution since the signing of the Oslo Accord, and given the failure to reform and build the organization, the PLO will remain unable to perform its mandated role toward the millions of refugees spread across the world.