The Palestinian Authority says it is ready to welcome Palestinian and Syrian refugees displaced from Syria, despite the current unlikeliness of such a measure amid restrictions imposed by Israel. 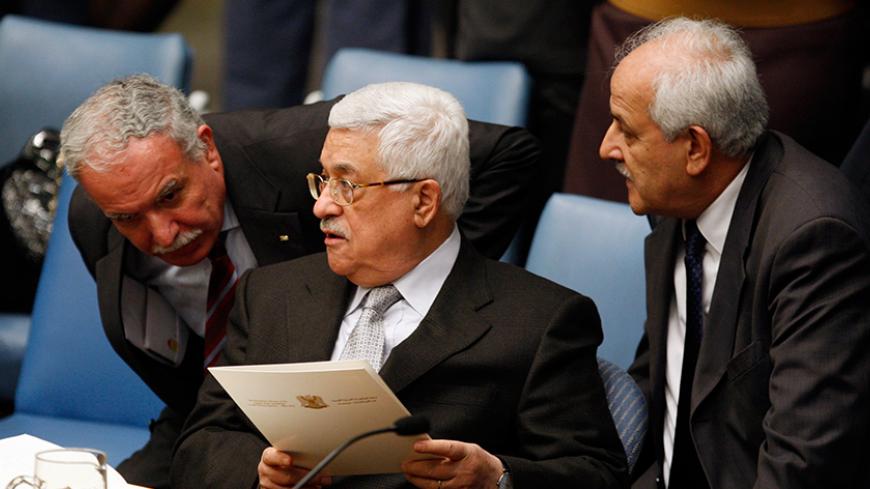 RAMALLAH, West Bank — As the world watches the Syrian refugee crisis unfold, the Palestinian Authority (PA) is offering to accept Palestinian and Syrian refugees on its soil, calling on the international community to exert pressure on Israel to make this possible. There appears to be widespread doubt, however, that the gesture is anything more than a symbolic effort designed to embarrass Israel.

In addition to the PA's media announcement, President Mahmoud Abbas on Sept. 5 asked Riyad Mansour, the UN permanent observer of the State of Palestine, to promptly tackle the matter with UN Secretary-General Ban Ki-moon in order to take the appropriate and necessary measures to host refugees in Palestine.

In this context, the Palestinian Foreign Ministry confirmed in a Sept. 6 press release “Palestine’s readiness to deal with the refugee problem, especially [Palestinian and Syrian] refugees flowing from Syria.”

“[The] country is ready, despite its limited and modest means, to open the houses of all the Palestinian citizens to accommodate asylum seekers instead of having them continue a journey toward the unknown, based on the instructions of President Abbas.”

Ahmed Majdalani, a PLO Executive Committee member, told Al-Monitor that tragic circumstances in Syria, especially in the Yarmouk refugee camp, led Palestinians to escape the camp, which now hosts only 5,000 refugees out of the 200,000 Palestinians who resided there. “The situation of Palestinians in Syria is similar to the situation of Palestinian refugees in Lebanon’s Nahr al-Bared camp when clashes broke out between the Lebanese army and militants of Fatah al-Islam on May 20, 2007. The camp was destroyed and its residents were displaced, but the PA was unable to receive them.”

A PA official told Al-Monitor on condition of anonymity, “The PA is well-aware that Israel will not allow it to receive refugees under any circumstances, and the Palestinian willingness to receive refugees aims to embarrass Israel before the international community and strip it of its ethical legitimacy before international forums, in light of the PA’s political battle to obtain world recognition of the Palestinian State.”

It should be noted that the refugee issue is a final-status issue under the Oslo Accord and has yet to be discussed, 22 years after the accord was signed. Final-status issues include Jerusalem, refugees, the state, borders and security, settlements and water.

The issue of refugees is of utmost sensitivity and importance for Palestinians who cling to their right to return to their home country pursuant to UN Security Council Resolution 194 issued Dec. 11, 1948.

Majdalani, who is also in charge of the Yarmouk camp file, told Al-Monitor, “[The] Palestinian position expresses the Palestinian leadership’s keenness to address the issue of refugees, out of the Palestinian sense of responsibility, by calling on international parties to exert pressure on Israel to allow the arrival of refugees, unconditionally and without Israel tethering this arrival to any waiver of the Palestinians’ right of return, as per Security Council Resolution 194.”

It seems that the PA does not have any practical plan to accommodate refugees. Majdalani said in response to a question about the PA’s ability and capacities to handle refugees, “This is our responsibility toward our people [Palestinian refugees in Syria]; we will deploy every possible effort and it is our duty to assume this responsibility. The people in the West Bank must receive refugees. In all cases, the situation here in Palestine is better than any other place. The Palestinian people will jointly and severally assume this responsibility.”

Ahmad Hanoun, director general of the PLO’s Department of Refugee Affairs, said he believes the PLO is the legitimate representative of the Palestinian people and has a responsibility toward refugees across the world. Hanoun said, “The Palestinian call to take in refugees is rejected by Israel, who [disregards] the right of return.”

Hanoun said about 800,000 Palestinian refugees live in the West Bank in 19 UN Relief and Works Agency for Palestine Refugees in the Near East (UNRWA)-recognized camps. “However, there are five camps that are neither recognized nor serviced by the UNRWA and where living conditions are tough, with high unemployment and poor services.”

Ahmad Jamil Azem, professor of international relations at Birzeit University, told Al-Monitor, “The Palestinian call [to take in refugees] is a positive reminder to the world that Palestinian refugees do have their own country and homeland. Even if the prospect of return is very unlikely, it remains a symbolic step that has its importance in the media.”

Azem said, “This step comes in the context of the international political and media pressure exercised by the PA on Israel in light of a major political, diplomatic and national vacuum experienced by Palestine.” He added, “Raising the Palestinian flag at the United Nations and announcing Palestine’s willingness to receive refugees are all marginal and symbolic steps compared to the main agenda that was supposed to be implemented, whether through the French initiative to the Security Council or by stirring up the peace process” after international issues with Iran are settled.

Writer and political analyst Ahmad Rafiq Awad seconded this opinion. He told Al-Monitor, “The PA lacks financial and logistical capacities to receive new refugees, not to mention Israel’s refusal of this call, which [if implemented] would lead to a demographic change in Palestine. The PA does not have the capacity to accommodate refugees.”

Awad said, “The Palestinian call has nothing to do with readiness or capacity. Rather, it has symbolic and emotional significance. This call is a message to the whole world that, despite the siege and the high poverty level, we are ready to receive refugees. On the other hand, it is an attempt to strip Israel of its ethical legitimacy before all international forums. This falls within the scope of the PA’s action on the international arena aimed to portray Israel as violating human rights and UN resolutions.”

It seems that the Palestinians’ journey of migration and asylum seeking that started 67 years ago will not come to an end soon. Their fate is to hop on the migration bandwagon by fleeing death in Syria to other countries while awaiting their return to their homeland, Palestine.