Abbas reaches out to Europeans to help rebuild negotiations framework

Palestinian President Mahmoud Abbas has called on EU member states to recognize the State of Palestine, as the Palestinian Authority and its supporters work to develop a new negotiations formula. 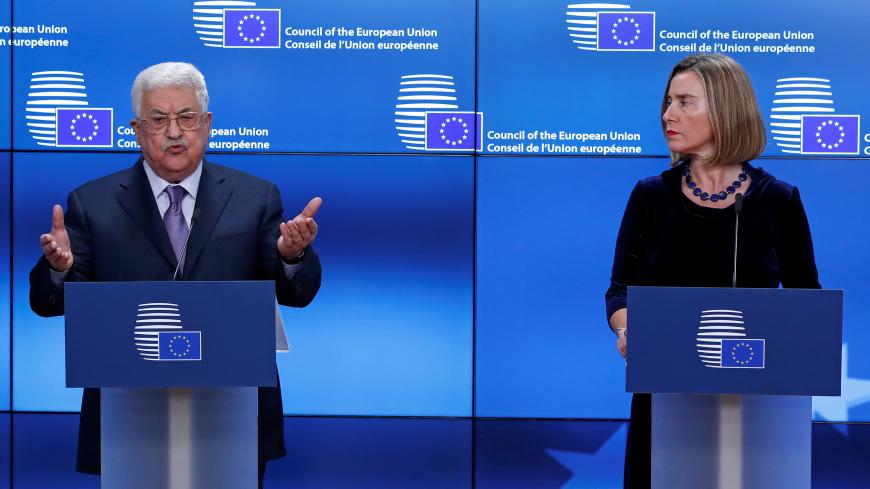 Abbas’ adviser for diplomatic affairs Majdi al-Khalidi, who accompanied the president to Brussels, told Al-Monitor, “President Abbas asked the EU countries to recognize the State of Palestine as soon as possible.” According to Khalidi, Abbas also expressed the Palestinians’ desire to find a new negotiations formula through the Quartet and other countries such as Japan or China, or to set up a new mechanism involving permanent members of the UN Security Council along with other countries.

The Palestinian Ministry of Foreign Affairs “is making contacts with a number of European countries to recognize the State of Palestine, and we hope that these efforts will be fruitful,” Khalidi said, adding, “While such recognition will raise the Palestinians’ hope of finding a political solution, it would not serve as a substitute for negotiations but help push them forward.”

The Palestinian Authority (PA) has declared its commitment to negotiations with Israel provided they are carried out under the auspices of international parties, not the United States, in announcing the end of the Americans’ exclusive role in the peace process. And although the EU supports the two-state solution and opposes US President Donald Trump's decision on Jerusalem, it will not be able to replace the United States in sponsoring the peace process.

Asked about recognition of a Palestinian state, Othman said, “This is a sovereign decision that each state shall make separately. There are different views in this regard. Some countries have expressed their willingness to recognize the State of Palestine, while other countries believe it is too early for such a step.”

But Palestinian diplomacy seems to have made some progress in this regard. Deputy Minister of Foreign Affairs Tayseer Jaradat told Al-Monitor, “A number of European countries are seriously considering recognizing the State of Palestine soon," calling Slovenia's move to do so "only a matter of time.”

Jaradat added that there are ongoing contacts with a number of other European countries wishing to recognize the State of Palestine, such as Luxembourg, Ireland, Belgium and Portugal, but they prefer that major European countries such as France or Britain do so first. He added, “It is time for the European countries to recognize the State of Palestine, which, unlike Israel, has been committed over the past years to all of its peace process obligations. The EU supports the two-state solution and contributes to building the Palestinian state institutions, so there is nothing that prevents such a recognition.”

The EU is one of the primary international donors to the PA, with its support focusing on governance reform, fiscal consolidation and policy, rule of law, justice, citizen safety, human rights, sustainable service delivery (education, health and social protection), water and energy infrastructure, and sustainable economic development, particularly in the agricultural and private sectors.

Three years ago, European support for the PA reached about 300 million euros ($372 million) a year, 100 million euros of which went to the UNRWA while the other 200 million went to support projects such as water, economic development, the rule of law, the salaries of the PA employees and social allocations to poor families in the West Bank and Gaza.

Jaradat said, “Such recognition would lead most countries to recognize the State of Palestine except the US, Israel and some minor countries that fall within the US orbit such as Guatemala, the Marshall Islands and Micronesia. This, in turn, would contribute to the achievement of a peace process that can restore security and stability to the region and set the stage for the recognition of Palestine as a full member state of the UN with East Jerusalem as its capital.”

Recognizing the State of Palestine would represent progress toward the two-state solution envisaged in the Oslo Accord and falls in line with the Dec. 21 position of the UN General Assembly against Trump’s decision on Jerusalem.

Palestine won observer status at the United Nations in 2012, encouraging Sweden to recognize it based on the 1967 borders in 2014 along with a series of symbolic and nonbinding moves by European parliaments including the European, French, Portuguese, Belgian, Spanish and Irish.

Ahmad al-Majdalani, a member of the PLO’s Executive Committee, told Al-Monitor, “There are several factors preventing European countries from recognizing the State of Palestine, including the Palestinian relations with the US and Israel. Other European conditions are also impeding such a recognition,” such as obstinate parties within the European governments.

Ahmed Jamil Azem, a professor of international relations at Birzeit University, told Al-Monitor that the PA is engaged in a long-term political project with the aim of making slow but steady political progress in light of the faltering peace process.

Azem added that it is too early to say that the EU has taken a stance against Israel, as the European policy seeks to contain and manage rather than solve the conflict. This is why many European governments are still not ready to take a position in favor of Palestine.

The Palestinians’ focus on recognition comes within the PA’s political and diplomatic strategy, which consists of winning acknowledgement and joining international conventions and institutions while seeking to become a full UN member state. But the effectiveness of such a policy is still questionable, considering that there are major European countries that are still reluctant to play an active role in the peace process, let alone make decisions that could raise the ire of Washington and Tel Aviv.