The European Union reassured Palestinian President Mahmoud Abbas about European support for a Palestinian state with East Jerusalem as its capital, but will the United States and Israel allow other parties to be involved in the Middle East peace process? 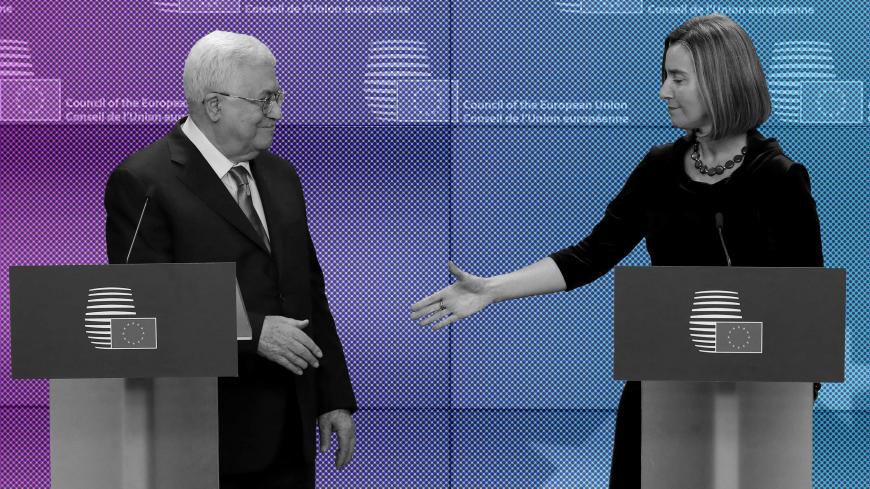 While US Vice President Mike Pence was concluding an unsuccessful visit to the Middle East, Palestinian President Mahmoud Abbas was making headway in Europe. The Palestinians, who say that they have ended America's sole sponsorship of the Palestinian-Israeli peace process, are looking to Europe to play a more active role. Abbas has been urging Europe to recognize Palestine on the 1967 borders and to agree to East Jerusalem as the capital of a future Palestinian state.

Ashraf Khatib, communications adviser to the Negotiations Affairs Department of the PLO, told Al-Monitor that the Palestinian position vis-a-vis the Americans is very clear. "The United States has disqualified itself from having a mediating role in the political process. The US decision or project to recognize Jerusalem as Israel's capital has proved the US [has adopted] the Israeli narrative that gives exclusivity to one nation over another," he said.

A PLO source speaking on condition of anonymity said the Palestinians have said no to negotiations with the United States and Israelis only, "but we haven't said no to the possibility of having a multilateral setting with more countries, not only the US."

The source told Al-Monitor that Palestinians have been talking with a number of parties, including Russia, China, South Africa, the European Union and its member states as well as Arab countries in order to come out with a formula. "What is clear, though, is that there will be no negotiations with the US as a sole party in the negotiating table," the Ramallah-based source said.

Abbas' visit to Europe to drum up support for a multilateral sponsorship of peace talks included visits to Switzerland, Belgium and the Netherlands. The trip also included meeting senior EU leaders and an audience with Dutch King Willem-Alexander.

Upon his arrival to meet EU foreign ministers in Brussels Jan. 22, Abbas called on the Europeans to swiftly recognize the state of Palestine. "We truly consider the European Union as a true partner and friend, and therefore we call its member states to swiftly recognize the state of Palestine and we confirm that there is no contradiction between recognition and the resumption of negotiations," Abbas told reporters.

A small but important response came quickly to Abbas' call. Slovenia, a small member of the EU, expressed interest in recognizing Palestine. If its parliament approves, Slovenia would join Sweden as the second state of the 28-member EU to recognize Palestine. European press reports say that the final decision on acknowledging the state of Palestine by Slovenia lies with lawmakers in Ljubljana after a formal proposal is made by Prime Minister Miro Cerar's Cabinet.

Portugal, Ireland, Belgium and Luxembourg are also considering a similar recognition of Palestine, according to the Ljubljana-based Delo newspaper as quoted by the Bloomberg wire service Jan. 23.

Since 1988, 137 countries have recognized the state of Palestine at the United Nations, where it has the status of "non-member observer state."

In Brussels, Abbas' reception was warm and positive. "I want to reassure President Abbas of the firm commitment of the European Union to the two-state solution with Jerusalem as the shared capital of the two states," Federica Mogherini, the EU's high representative for foreign affairs, said.

But at the same time, Mogherini said that she continues to want to work with the United States on Middle East peace. According to press reports from Brussels, Mogherini had talked late last year with Pence and Secretary of State Rex Tillerson about ways to relaunch the peace talks.

Palestinians would love to be involved in a process that is similar to that of the Iranian nuclear talks. In the P5+1 process, members of the UN Security Council and Germany participated in talks that brought about a major international breakthrough that addressed concerns about Iran's nuclear activities. Palestinians would also be happy with a serious revival of the dormant Quartet group made up of the EU, the UN, the United States and Russia. The Quartet has recently stayed away from negotiations, although it says on its website that its mission is "supporting the Palestinian people to build the institutions and economy of a viable, peaceful state in Gaza and the West Bank, including East Jerusalem."

Since the US declaration on Jerusalem, the options available to the Palestinian leadership have been reduced. While Abbas can repeatedly reject sole US involvement in the peace process, his position is of little use if the Israelis refuse to allow others into the peace process sponsorship tent. The fact that Europe and the Palestinians are interested doesn't help break the logjam. Only if Israel and the United States are under international pressure will they agree to such a change. At the present time, there appears little evidence that any party can make such pressure on US President Donald Trump or Israeli Prime Minister Benjamin Netanyahu.