What EU’s Mogherini, Tillerson agreed on

European Union leaders are exploring new policies on the Middle East, including the idea of convening a Madrid II conference. 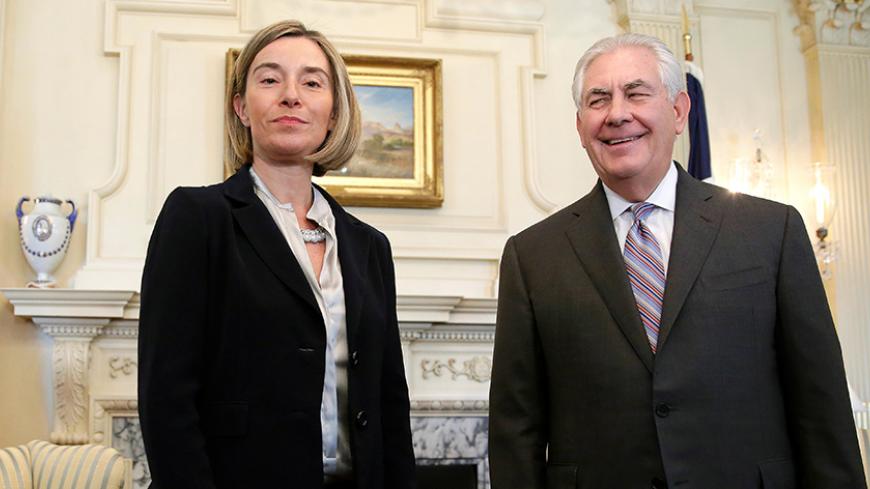 The European Union finds itself at a crossroads, as important changes are taking place both inside and outside of Europe. And the outcome of this crossroads will undoubtedly affect many regions in the world, including the Middle East.

With the exit of the United Kingdom from the EU, a US president openly critical of the EU and the possibility of an anti-EU president at the French Elysee Palace, EU leaders will be forced to reassess their policies. EU’s foreign and security policies stand first in this reassessment line, as Brussels must redefine its relationship with the new US administration. With the United States and Russia both aspiring to a weaker EU and not exactly lamenting the Brexit, EU leadership is in the process of developing policies of greater independence.

Federica Mogherini, the EU high representative for foreign affairs and security policy, had her first meeting with US Secretary of State Rex Tillerson on Feb. 9. A senior official close to Mogherini told Al-Monitor that the meeting focused on mapping out the agenda for future discussions between the United States and the EU. The aim of the EU is to create a balance between compromises with US President Donald Trump’s administration and a more independent foreign policy, as defined by German Chancellor Angela Merkel. The issues on the US-EU agenda include the situation in Ukraine, the Iran deal, the fight against the Islamic State (IS) and other fundamentalist terror, the situation in Syria and an Israeli-Palestinian two-state solution.

Mogherini has said publicly that she is dismayed by the unorganized decision-making process of the White House, but she will keep an ongoing rapport with the US secretary of state. Her associates explain that the EU awaits the input of Russia on the US positions, especially in relation to Ukraine, the Iran deal, Syria and the war on IS.

On the Israeli-Palestinian issue, it is clear that a two-state solution and the curbing of Israeli settlement policies is of greater urgency to the EU than it is to the United States. The senior EU official said that on this issue specifically, the EU will express an independent foreign policy, steered by the common interests and views of its member states. With the last Middle East Quartet report on obstacles to the two-state solution in July 2016 and the anti-settlement United Nations Security Council Resolution 2334, freezing settlement expansion is a high priority for the EU. According to the official, Brussels will attempt to convince the United States to go ahead with a diplomatic move on a two-state solution while accepting Trump’s preference for a regional approach.

In this vein, the EU is revisiting the last joint European-American approach to a policy platform for Israeli-Palestinian conflict resolution created by former US President George H.W. Bush: the Madrid conference of 1991, which promoted parallel bilateral and multilateral negotiation tracks. In a current configuration, a Madrid II conference could again take the role of a plenary launching of bilateral and multilateral negotiations.

The EU official describes the parameters of a possible Madrid II conference: The invitation to such a conference would be based on existing agreements between the parties and relevant Security Council resolutions, with the inviting part being the Quartet (EU, UN, United States and Russia). The date and location would be agreed upon with the United States and Russia. The representation level would be of foreign ministers, except for Israel and the Palestinian Authority, which should be represented by Prime Minister Benjamin Netanyahu and President Mahmoud Abbas, respectively.

The conference will launch direct Israeli-Palestinian negotiations, to be held both in the region and in the United States. The sides will negotiate all permanent status issues: borders, security, Jerusalem, refugees, settlements and end of conflict. During the negotiations, both sides must refrain from any unilateral acts (including settlement expansion for Israel, turning to UN agencies for Palestinians) that could predetermine permanent status. The time frame of these negotiations will be one year; another plenary session to report the progress would convene in 2018.

On the multilateral track, the basis will be the 2002 Arab Peace Initiative, with a gradual beginning of normalization between Israel and the Arab states. The multilateral talks would take place in Brussels and refer to the following topics: economic cooperation, environment, regional security and anti-terror, and water. The representation level of these talks would mostly be of experts and will progress in parallel to the bilateral track, with the aim of consolidating agreement points. These, in turn, would be reported and discussed at the 2018 plenary session.

The senior EU official emphasized that, given the danger of a total diplomatic stalemate, which would lead to a possible outbreak of violence, it is essential to agree with the US administration on a peace negotiation platform, while securing a leading role for the United States.

A senior Israeli Foreign Ministry official who spoke to Al-Monitor on condition of anonymity rejected any such initiative that would create an international framework for negotiations. Israel, according to him, will agree only to bilateral and unconditional negotiations with the Palestinians.

Despite Israel’s rejection, Netanyahu’s government could be in for a surprise. The EU’s talks with the United States and with Russia could bear fruits, and such a framework may come about as a result of these talks about the region.