Who will have upper hand in Trump’s Mideast policy?

Palestinians are enlisting the European Union, Egypt and Russia to counterbalance pro-Israeli positions that prevail within President Donald Trump’s entourage. 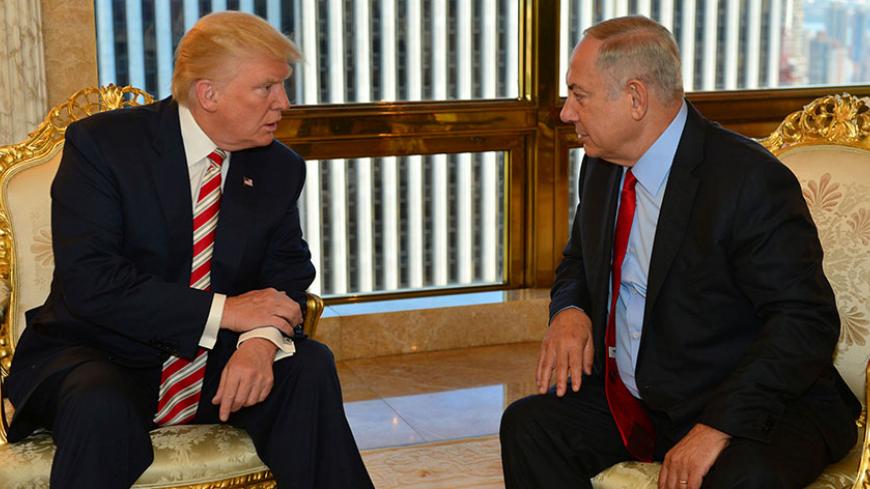 In view of Israeli Prime Minister Benjamin Netanyahu’s February visit to Washington and his meeting with US President Donald Trump, the US administration will soon be confronted with conflicting pressures: Israel on the one hand, and the Palestinians, the European Union and Egypt on the other.

According to a senior Ministry of Foreign Affairs official who is part of the policy team preparing Netanyahu’s visit, Israel is currently drafting a proposal for Trump and his team, pre-empting any future agreement with the Palestinians. The draft will propose that the new US administration recognize Israel’s future sovereignty in the settlement blocs without defining their scope. Israel also seeks US assurances that it will prevent any diplomatic move internationalizing the Israeli-Palestinian conflict resolution, such as the continuation of the Jan. 15 Paris conferences or any other UN Security Council resolution stipulating the illegality of Israeli West Bank settlements. On the other hand, the relocation of the US Embassy to Jerusalem is not high on the Israeli agenda, out of concern for unrest in the West Bank. Such an agreement by the new administration will enable the Netanyahu government to freely continue its settlement expansion policies, especially within the settlement blocs and the Jerusalem area. Netanyahu will also ask for new sanctions on Iran.

The senior official said that this strategy was commonly elaborated by Netanyahu and Defense Minister Avigdor Liberman. He indicated that according to initial contacts between the Israeli Embassy in Washington and the Trump administration, it seems that two camps are emerging within Trump’s foreign and security policy team. On the one side are the officials who were part of the presidential election campaign and are now part of the White House team — people who are clearly leaning toward Israeli right-wing positions, are skeptical of the two-state solution in the foreseeable future and are in favor of Israeli settlement construction within the settlement blocs. On the other side are the secretaries of state and defense — people who are more pragmatic, tend to favor a two-state solution (on the condition that Palestinians take stronger measures against violence and terror) and oppose a move of the embassy to Jerusalem at this point.

The Palestinian Authority leadership is well-aware of Jerusalem’s diplomatic symbiosis with Washington. Hence, it is currently working to create a counterbalance with Egypt, the EU and Russia. Talks between Ramallah and Brussels have already taken place, both before and after Trump’s inauguration, as to how to counter what seems to be a new US-Israeli understanding on settlement policies. And more specifically, on how to curb these tendencies during the Netanyahu visit, which will only strengthen the Israeli government’s annexation ambitions.

A senior EU official close to Federica Mogherini, the EU high representative for foreign affairs and security policy, told Al-Monitor that EU headquarters and most member states (except for the United Kingdom) were dismayed with Trump’s inauguration speech. While indicating to UK Prime Minister Theresa May the possibility of a quick and good trade deal, the US president publicly criticized the EU. “The new US president is clearly opposed to multilateral frameworks, especially those open to the integration of migrants. His sharp criticism of [German] Chancellor Angela Merkel on the issue also signals an anti-EU posture. Nothing could please [Russian President] Vladimir Putin more than such comments and approach,” the official said.

That being said, the EU has initiated a dialogue with the new Trump administration, especially with the president himself and Secretary of State Rex Tillerson. On the Israeli-Palestinian issue, the EU will convey in the strongest possible terms its opposition to moving the US Embassy to Jerusalem, warning that such a step would endanger the stability of the region. Mogherini made this clear in her Jan. 22 meeting with Israel’s Minister of Regional Cooperation Tzachi Hanegbi in Barcelona. The EU will also impress upon the new administration the absolute necessity and feasibility of a two-state solution based on the Paris conference conclusions, the Quartet report and Security Council Resolution 2334.

In parallel to talks with Washington, the EU intends to hold similar dialogues with Russia and the Arab League. The aim is to present the Trump administration with a two-state process consensus of the international community, right after Netanyahu’s visit there.

The Palestinians are not only counting on the Europeans to influence Washington. They are attempting to enlist Egyptian President Abdel Fattah al-Sisi to these efforts. Palestinian President Mahmoud Abbas has sent several emissaries to Sisi asking him to intervene vis-a-vis the Trump administration on the issue of the US Embassy in Israel, and in favor of a two-state solution.

The Egyptian president, who has a personal rapport with the new US president and spoke to him by phone on Jan. 23, has agreed to raise these issues also when he meets Trump in the near future.

It is too early to predict which of the two conflicting forces — Israel versus the Palestinians, the EU, Egypt and also Russia — will have a greater impact on Trump’s Middle Eastern policies. These will depend on the advice he receives from his political team in the White House and from the State and Defense departments — advice that might be contradictory. One can assess in the short term that political popularity interests (vis-a-vis the American Jewish community) will override policy considerations. And if so, Netanyahu will reap these fruits during his upcoming Oval Office meeting.