The new UN Secretary-General Antonio Guterres greatly believes in collective diplomacy, and intends to imply this concept to advancing a two-state process. 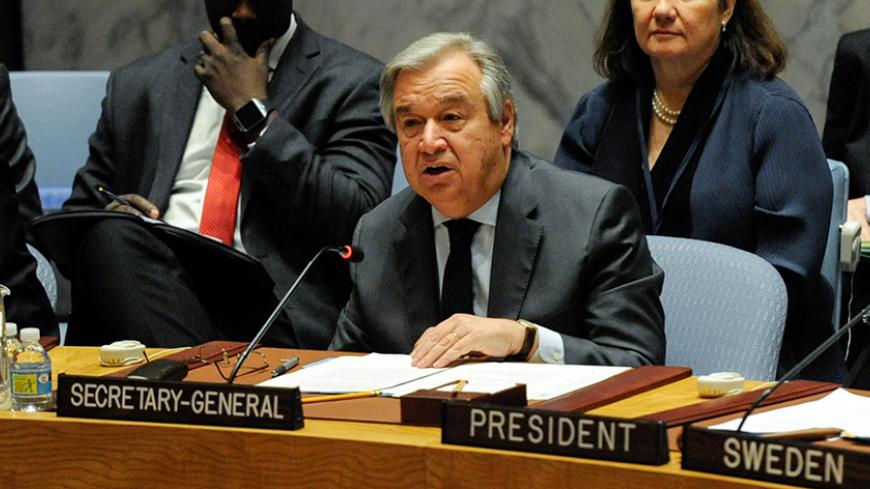 The new secretary-general of the United Nations, Antonio Guterres, sees in the Paris peace conference on Jan. 15 a realization of his long-held view that peace and conflict resolution can only be achieved and sustained through ongoing multilateral diplomacy. Guterres is now contemplating how to leverage the expected outcomes of the conference.

According to a senior official close to him, speaking to Al-Monitor on condition of anonymity, Guterres intends to strengthen and reform the UN under his mandate as secretary-general. In his own words from Jan. 3 upon taking office: “Only global solutions can address global problems, and the UN is the cornerstone of that multilateral approach.”

The fact that he was a consensus candidate by all Security Council permanent members should help this process. He is fully aware of the need to conduct a thorough dialogue with the incoming Donald Trump administration, which is not exactly supportive of a strong UN. He will meet President Trump soon after Trump’s inauguration. The senior UN official noted that Secretary-General Guterres intends to strengthen the role of the UN in regard to peacemaking and peacekeeping.

Upon taking office, Guterres also said, “Let us make 2017 the year of peace.” His priority will be a surge in diplomacy for peace. He plans to be personally involved in the issues of the Iran deal implementation, ending the civil war in Syria and achieving a two-state solution for Israel and Palestine.

Guterres will start his diplomacy for peacemaking and peacekeeping by immediately dialoguing with the leaders of Russia (he already met with Russian President Vladimir Putin on Nov. 24), China, the United Kingdom, France and the European Union, and as mentioned with President-elect Trump after his swearing-in. He believes that these governments are on board regarding the Iran deal (with the unknown position of the new Trump administration). On Syria, on the other hand, the diverging views of Moscow, the United States and the EU regarding an end to hostilities and power sharing between Syrian President Bashar al-Assad and the Sunni leadership must be bridged. As for the Israeli-Palestinian issue, Guterres would emphasize the importance of Israel complying with Security Council Resolution 2334; it is an issue that would require serious work. He believes in a two state-solution based on Security Council Resolutions 242 and 339, the Oslo Accord and the 2002 Arab Peace Initiative.

The secretary-general intends to report to the Security Council in three months on Israeli compliance with Resolution 2334. According to the senior official, Guterres had instructed UN personnel in the West Bank to thoroughly inspect and report the Israeli building of settlement housing in contradiction to the Security Council resolution. Guterres does not consider the resolution as a hostile UN move against Israel, although he was disheartened by Israel cutting its contribution to the UN by $6 million. The UN source noted that for Guterres, the resolution intends to ensure the viability of the two-state solution. “The secretary-general sees his reporting as part of the UN’s peace efforts. When Guterres says that 2017 must be a year of peace he also keeps in mind the fact that June 2017 will mark 50 years of the occupation, and he refers to peace between Israel and a new Palestinian state,” he said.

Guterres strongly believes in multilateralism when it comes to peacemaking, with an important role for the UN headquarters and UN specialized agencies. While he respects the leading role of the United States, he believes in greater equality of influence between all the permanent status stakeholders and parties. He intends to consult with the five Security Council permanent members (United States, Russia, France, United Kingdom and China) on a regular basis on all international peace efforts. In this context, the latest Quartet report (from the United States, Russia, EU, UN) on the Israeli-Palestinian issue would serve him as a basis for a future two-state solution process.

According to the UN source, Guterres has five measures in mind to advance a two-state solution:

Guterres is not expecting a positive response on these policies from the incoming Trump administration, but he intends to have an ongoing dialogue with the new US president and US secretary of state on these positions, hoping to reach a consensus among all permanent Security Council members.

A senior Israeli Ministry of Foreign Affairs official dealing with the UN told Al-Monitor on condition of anonymity that given the record of the UN on Israel, and especially the latest Security Council resolution, Israel will refuse to work with the UN on any issue related to the Palestinians, except for special arrangements in the Gaza Strip. “Israel will have a one-track foreign policy, in coordination mainly with the new Trump administration,” he said.

This Israeli position is fundamentally mistaken. Guterres, while a veteran diplomat, reflects a fundamental change in current international relations and conflict resolution, toward collective diplomacy efforts. And this change is the key to a new two-state solution process.