With the Trump administration clearly on Israel’s side, Palestinian leadership might resort, once again, to armed struggle. 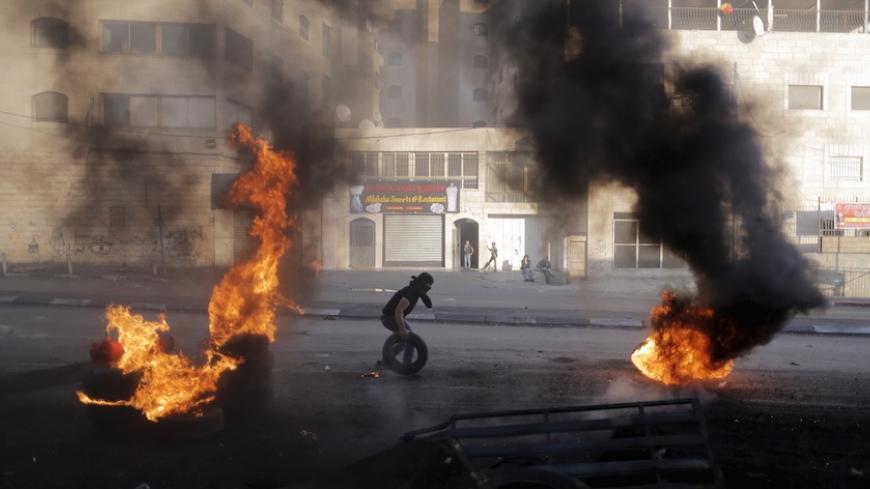 Palestinians clash with Israeli border police during clashes at a checkpoint between Shufat refugee camp and Jerusalem, Oct. 9, 2015. - REUTERS/Ammar Awad

It took the Netanyahu government four days after US President Donald Trump's inauguration to announce one of the biggest Jewish construction plans for the West Bank: 2,500 housing units. Even with Trump’s latest declaration against the construction of new settlements, Israeli Prime Minister Benjamin Netanyahu and his coalition partners are fairly certain that they need not fear US denunciation of any settlement expansion or any American demand to reverse the move in accordance with United Nations Security Council Resolution 2334.

This new situation is both a blessing and a curse for Netanyahu. On the one hand, no more Obama administration blocking and criticizing settlements, which the administration and the UN defined as the main obstacle to a two-state solution. On the other, the free pass from Trump places Netanyahu on a collision course with the right-wing flank of his government. Education Minister Naftali Bennett's HaBayit HaYehudi party is pressuring the government to exploit the new right-wing friend in the Oval Office for concrete West Bank annexation measures, starting with the application of Israeli law in the Ma'ale Adumim township, east of Jerusalem.

According to a senior Foreign Ministry official who spoke to Al-Monitor on condition of anonymity, even though Netanyahu is obviously satisfied with Trump’s approach, he does not want to provoke the more pragmatic elements in the new administration, namely seniors in the State and Defense Departments. Similarly, Netanyahu doesn't want to provoke the European Union member states who are friendly to Israel, such as Germany and the United Kingdom. In his own view, he is implementing the vision of "greater Israel" and preventing Palestinian statehood by building mainly in the Jerusalem area east of the Green Line. He intends to coordinate these plans in his upcoming meeting with Trump and to put an end to any multilateral diplomatic efforts on a two-state solution.

The Palestinian leadership is confronted with this new reality and is deeply concerned that this may create in the coming months an irreversible reality on the ground that would make Palestinian statehood on the 1967 lines virtually impossible. A senior PLO official close to President Mahmoud Abbas told Al-Monitor on condition of anonymity that Abbas was more furious and dismayed by the lack of reaction to the settlement announcement than by the expected announcement itself. "Israel's continued settlement and occupation policies go unpunished by the international community. Netanyahu now has a 'license to kill' the two-state solution." He told Al-Monitor that following the official announcement on the 2,500 housing units, the Palestinian leadership held special deliberations.

Following these deliberations, it was decided that only the Palestinian leadership could make Israel pay a price for the occupation. Five moves/policies were recommended for immediate action.

The first is to demand that the Arab League put the 2002 Arab Peace Initiative on hold until there is a freeze of settlements in accordance with Security Council Resolution 2334.

A fourth move would be asking the EU and Russia for retributions on Israel for its noncompliance with Security Council Resolution 2334, including encouraging the International Court of Justice to act in accordance with international law.

And the last, most serious recommendation is preparing to shift in the coming weeks from diplomacy to violent resistance. This shift would mark 50 years of occupation and would include the Fatah movement.

The senior PLO official does not expect the international community measures to intimidate the Netanyahu government, which will continue its annexation policies in an undisturbed way given the change of policies in Washington. In such a situation, he said, with the aggressive Israeli settlement and occupation policies ongoing, “the countdown has begun to a renewal of the Palestinian armed struggle, also by the Fatah movement.”

The Israeli Foreign Ministry official reacted to these Palestinian threats in a condescending way, saying, "The Palestinians have made a mistake by not engaging in bilateral unconditioned negotiations with us. Recruiting an international anti-settlement consensus now, in the post-Barack Obama period, has become mission impossible." As to violent resistance, the official said that the Israeli government is undeterred by it, as the Palestinian Authority leadership is more dependent on the security cooperation with Israel than is the Israeli security establishment.

Yet the talks of violent resistance in the corridors of influence in Ramallah should be taken seriously by Israel. In the Israeli-Palestinian experience, a vacuum in diplomatic activity for a two-state solution often gets filled by violence.