US President Donald Trump’s inclination toward a regional peace process has driven the Palestinians to create a new formula for a confederation with Jordan. 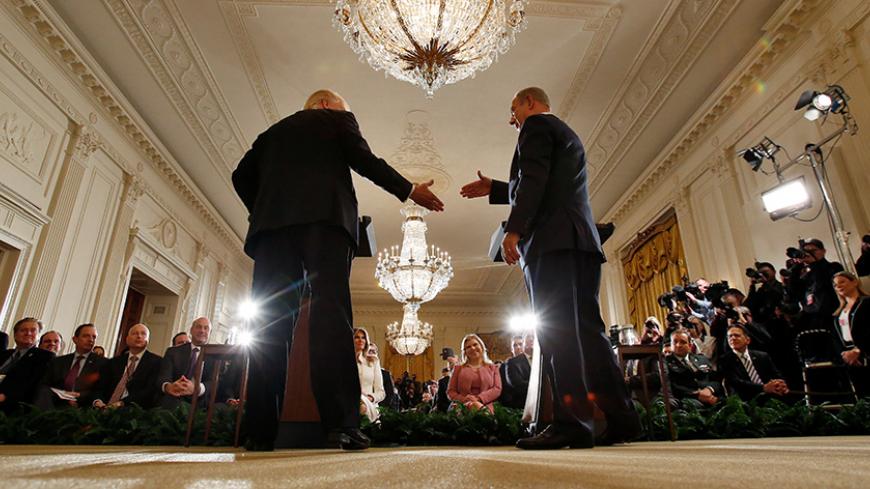 What stood out in US President Donald Trump’s statement at the joint press conference with Israeli Prime Minister Benjamin Netanyahu on Feb. 15 was the regional approach to Israeli-Palestinian peacemaking. An adviser to the US National Security Council with good ties to the Arab world told Al-Monitor that prior to the Trump-Netanyahu meeting, the administration discussed with Egypt, Saudi Arabia and Jordan a regional umbrella to Israeli-Palestinian peace negotiations.

The ambitions of the new administration on the Middle East regional level are much more modest compared with the regional initiatives promoted by the Obama administration. Most specifically, they are less ambitious than the regional attempt by former Secretary of State John Kerry to initiate a Jordanian-Egyptian-Israeli regional process. According to the adviser, Trump is interested in cooperation with pragmatic Arab countries in the battle against the Islamic State.

In the press conference, Trump said, “I’m looking at two-state and one-state, and I like the one that both parties like. I’m very happy with the one that both parties like. I can live with either one.” This reference to a two- or one-state solution came in response to Prime Minister Benjamin Netanyahu’s request. Trump excels in confused messages, and in this case, the message was rectified 48 hours later by the new US Ambassador to the United Nations Nikki Haley, who specifically spoke about a two-state solution policy of the new administration.

Netanyahu, according to a senior Ministry of Foreign Affairs official who spoke to Al-Monitor on condition of anonymity, walked out elated from the Oval Office meeting. He received all the go-aheads he wished for in order to continue his de facto (and not de jure) annexation policies through the expansion of settlements within the settlement blocs and economic expansion in Area C (under Israeli control). The reported request by Trump to curb some of the settlement activities actually serves Netanyahu. It allows him to deflect the extreme right-wing pressures of Education Minister Naftali Bennet. He can now claim that he is obliged to concede, at least at some degree, to Trump’s request.

The Palestinian leadership is currently holding intense deliberations, both internally and also with its Arab allies, primarily Egypt, Jordan and Saudi Arabia. According to a senior Fatah security official, Ramallah, in conjunction with its Arab partners, decided to take Trump at his word about the regional approach. Together with Egypt it will suggest to Washington an outline of a new regional approach.

This new outline will be based on three principles. The first principle is that the basis for future peace negotiations is the Arab Peace Initiative of 2002. Then, on this basis, the second principle is the US administration should hold in the coming months a summit in Washington with the Arab leadership. This summit should focus on preparing a regional peace conference leading to Israel-Palestinian negotiations based on the Arab Peace Initiative, with the participation of Egypt, Jordan, Saudi Arabia and Morocco, chaired by Trump. The third principle concerns advancing the Palestinian statehood issue through an attempt to reach a Palestinian-Jordanian confederation agreement backed by the Arab League.

According to the Fatah official, such a confederation agreement will be difficult to achieve given the historical suspicion between the Jordanians and the Palestinians. He explained that “at this point, this is the best route to statehood. Historically and demographically we are tied to Jordan and to the Palestinian population west of the Jordan River. It will need the backing of Egypt, Saudi Arabia and the Arab League.”

The official added that within such a Jordanian-Palestinian confederation, Palestine must be a fully independent state, within the 1967 lines with East Jerusalem as its capital (with minor agreed land swaps with Israel, as outlined in the latest version of the Arab Peace Initiative). In parallel, the confederation part will be expressed in a multitude of ways.

For instance, there will be a free trade agreement as well as joint industrial and tourism zones (at the Dead Sea); the two parliaments will convene in a joint session twice a year; the security and anti-terror activities on the border crossings and in the West Bank will be undertaken jointly by the Jordanian army and the Palestinian police in coordination with Israel. Another feature of the confederation would be that East Jerusalem, the Palestinian capital, will be under Palestinian jurisdiction with a special role for the Jordanian kingdom in the Muslim holy sites. A joint Palestinian-Jordanian delegation (as was the case in the 1991 Madrid Conference) will conduct permanent status negotiations with Israel. Following a permanent status agreement, Israel will be offered to join an economic confederation with the Palestinian-Jordanian confederation.

The source also said that the Arab countries will normalize relations with Israel on the basis of the Arab Peace Initiative, adding that such a plan would be the realization of a regional common interest approach that all sides can live with.

Such an approach indeed could serve as a basis for regional negotiations. But this is the last thing Netanyahu has in mind. He wants to improve Israeli relations with Egypt, Jordan and the Gulf countries while maintaining the occupation. Mission impossible.

As to Trump, it is not clear if he indeed seeks a regional peace deal. But even if he does, it is doubtful whether he and his team have the diplomatic wisdom and skills to set such a complex and difficult regional strategic arrangement in motion.