Palestinian officials are pushing a plan for enhanced cooperation and confederative ties with Jordan. 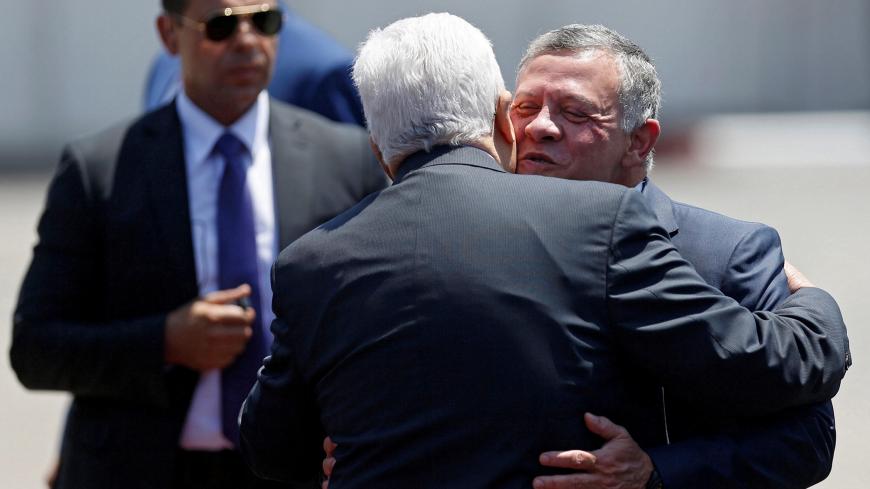 As confidence in Palestinian leadership hits record-low levels, senior PLO officials are again discussing the idea of a Palestinian-Jordanian confederation, made of two independent states.

One of these PLO officials told Al-Monitor on condition of anonymity that in the latest meeting between Jordanian King Abdullah II and Palestinian President Mahmoud Abbas in Ramallah on Aug. 7, the two leaders agreed to tighten relations in several domains. The leaders decided to enhance security cooperation against the radical fundamentalist movement out of Iran and Syria and to strengthen economic ties, to support the Palestinian Authority (PA). They also decided to increase police collaboration with Egypt and Saudi Arabia and to cooperate on the Muslim safeguarding of Haram al-Sharif (Temple Mount).

The PLO source said that given the domestic situation in the United States, with an administration that is barely viable, it is very unlikely that there will be a viable peace process. “Faced with such a US administration and with [Prime Minister Benjamin] Netanyahu’s annexation policies, we are forced to conclude that the Arab sides must act unilaterally in favor of Palestinian statehood," he said. He also claimed that senior Fatah echelons believe this can be achieved either by a violent uprising or by diplomacy. The status quo is untenable.

If a violent uprising is chosen as the course of action, there most likely will be an agreement of national unity with Hamas.

If diplomacy has the upper hand, ties to Jordan, Egypt and Saudi Arabia will be strengthened and the Palestinian-Jordanian confederation will become an option again.

The senior PLO official argued that the Palestinians are more positive than the Jordanians on the concept of confederative ties. "What brought us recently closer was Netanyahu's intrusive security measures on Haram a-Sharif. The greater the cooperation between us and the Jordanians is on the security of Al-Aqsa, the greater the chances are for closer ties between the two sides of the [Jordan] river."

The PLO official belongs to a group of Oslo process veterans who have recently crafted a plan that would gradually lead to close ties between the Palestinians and the Jordanians. He explained that as joint protectors of Al-Aqsa, it is in the common interest of the Palestinian and Jordanian leaderships to explore such ties. Also, each side is eager to receive greater US economic assistance — the PA for its nation-building process and Jordan for its severe refugee crisis.

According to this plan, a gradual tightening of relations would take place within several spheres. A priority point would be tightening security cooperation between the Jordan Haram al-Sharif Waqf (religious custodian) and the Palestinian Ministry of Religious Affairs. A second point would be strengthening economic cooperation, also on infrastructure such as water, energy and transportation. A third point would be coordinating policies vis-a-vis the United States and the European Union in relation to a two-state solution on the basis of the Arab Peace Initiative. For these to be achieved, the plan establishes regular meetings between the leaders of the two sides and meetings of policy coordination between the two negotiation teams on all permanent-status issues.

Obviously, the route to any confederative relationship of this sort would encounter tremendous obstacles, mainly grounded in the demography of Jordan where half of the population is of Palestinian origin. Some Jordanians harbor suspicions that the Palestinian leadership aspires to create one day a "greater Palestine." Yet the current configuration in the international community may bring the parties to at least explore a gradual road map to a confederation between two states, Palestine and Jordan.

A senior official from the Israeli Ministry of Foreign Affairs told Al-Monitor on condition of anonymity that Israel is aware of those discussions and that the Jordanian king is highly reluctant to get engaged in the resolution of the permanent-status issues. Yet he admitted two things:

The first is that the relationship between Abbas and Abdullah are at a high positive point and that closer relations are being discussed between them, including the establishment of new joint crises committees.

The Israeli diplomat argued that Netanyahu is in full control of the situation regarding the Palestinians and in close coordination with the Donald Trump administration.

Be that as it may, the confederative-ties plan must be approached in a broader context. The tumultuous domestic situation in the United States may very well lead to new positions among major regional players. These regional players understand this and are becoming more self-reliant.