Will Palestinian-Jordanian confederation see the light?

In light of the stalled peace negotiations between Palestine and Israel, Palestinians are seriously considering the Palestinian-Jordanian confederation option as the only way out of their impasse. 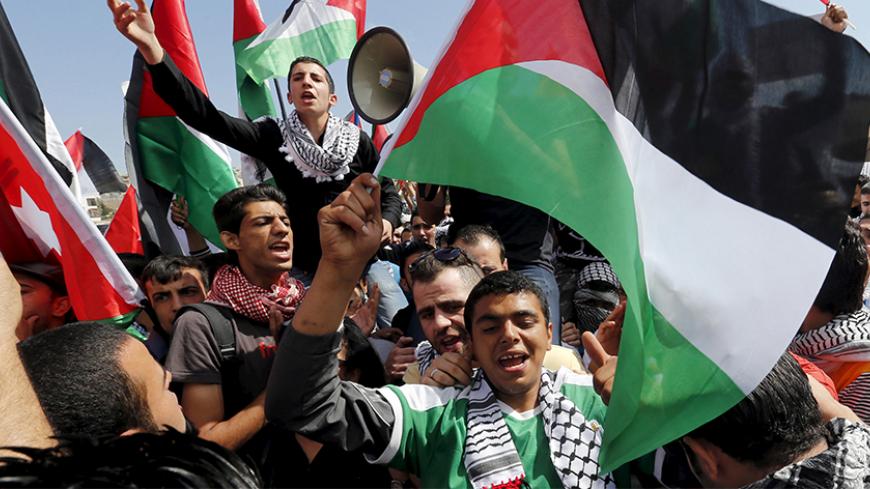 Demonstrators wave Palestinian and Jordanian flags during a protest to express solidarity with Palestinians and against the escalation of Israeli-Palestinian violence, Amman, Oct. 9, 2015. - REUTERS/Muhammad Hamed

Palestinian-Israeli relations have reached an unprecedented political stalemate, with Israel's recent refusal of the French initiative to renew the peace process. This process has been suspended since April 2014, following the reconciliation between Hamas and Fatah, the Palestinian Authority's (PA) announcement of its refusal to recognize the existence of a Jewish state and Israel’s imposition of economic sanctions on the PA, such as halting the transfer of Palestinian tax revenues to the PA's treasury following the PA’s accession to numerous international organizations without coordination with Tel Aviv.

With Israel’s refusal of the French initiative on renewing peace talks, the Palestinians now must think outside the box and reopen talks about the Palestinian-Jordanian confederation structure.

The Palestinian-Jordanian confederation means the establishment of two states for two peoples, after the establishment of the Palestinian state based on the 1967 lines. This confederation solution was first raised by Jordan in 1972, but the PLO categorically rejected it in the same year. According to the confederation system, there would be two capitals — Jerusalem for the Palestinians and Amman for Jordanians — a centralized judiciary and one armed force led by the Jordanian king, one centralized council of ministers and one national assembly elected by the two peoples. The state should allow citizens to have full freedom of movement between the two regions.

Shaker al-Jawhari, editor-in-chief of online newspaper al-Mustaqbal al-Arabi, and close to the decision-making circles in Amman, told Al-Monitor, “The confederation option is being considered and discussed between the two sides, Palestine and Jordan. There is constant communication between officials from both sides, and I know that some of the most prestigious Palestinian figures in the West Bank are visiting Amman and meeting with senior officials in the kingdom. They are strongly supporting the confederation option and openly showing a great deal of loyalty to the Royal Palace. The confederation, however, should be preceded by a declaration of a Palestinian state.”

In an article published by the Division of Refugees Affairs — Hamas, Palestinian legal expert Anis Kassim wrote in January 2013 about the legal problems facing the Jordanian-Palestinian confederation that requires a referendum among the Palestinians in the occupied territories and abroad. He explained that this is not possible given that the Palestinians abroad are spread out across dozens of countries around the world. He added that the PLO’s Executive Committee that will be tasked with holding this referendum is unconstitutional and its legality is being challenged since it was not formed following democratic elections by the Palestinians.

He said the confederation would give legal legitimacy to the Israeli settlements and solve the issue of return of the Palestinian refugees by integrating them in the confederation, pointing out that the expected Palestinian state in the West Bank will take the form of dismembered and disarmed cantons that fall within the scope of a confederation with Jordan and that do not enjoy a full-scale sovereignty, while Israel would get rid of the legal burdens of its occupation of Palestine and dodge the international community’s condemnations.

In the midst of the Palestinian buzz about the confederation with Jordan, former Jordanian Prime Minister Abdel Salam Majali visited the West Bank May 21 and announced in front of roughly 100 prestigious Palestinian figures in Nablus his support for the confederation through the establishment of a common legislative council and a common government. During his visit, Majali said the Palestinians are not qualified enough to handle their own affairs, especially their financial affairs.

Other Jordanian officials also visited the West Bank, including Jordanian Foreign Minister Nasser Judeh on March 24 and the Director General of the Jordanian Customs Wadah al-Hamoud on May 19.

Al-Monitor learned from a tribal source in the city of Hebron, who preferred anonymity, that a prominent tribal delegation representing some cities in the West Bank has been making arrangements in the past few days to visit Amman and raise demands to King Abdullah II to activate the confederation project.

Ghassan al-Shaaka, a member of the Executive Committee of the PLO who lives in Nablus, told Al-Monitor, “The Palestinian-Jordanian confederation is widely accepted and supported among the Palestinians, in light of the interrelated and positive family relationships between the two sides. This option must be preceded by ending the Palestinian division, declaring the Palestinian state and holding referendums in Jordan and Palestine.”

Talks about the confederation were not limited to the Palestinians and the Jordanians. The Israelis — through former Israeli diplomat and Al-Monitor contributor Uri Savir — have been also promoting this option as a solution that would rid them of what they see as the Palestinian burden, according to Yoni Ben-Menachem, a former Israeli officer in the Military Intelligence Directorate and expert on Arab affairs.

In the past few weeks, Israel has been expressing its support for this option in several articles in the Israeli press. Majali announced during his recent visit to the West Bank May 21 that Israeli Prime Minister Benjamin Netanyahu wants to implement the Jordanian-Palestinian confederation solution as soon as possible and has been calling for such option on several occasions.

If we take a closer look at the Palestinian and Jordanian positions toward the confederation, we would understand Jordan's concerns of this option, in terms of demographic statistics. According to data released by the United Nations Relief and Works Agency for Palestine Refugees in the Near East, Jordan hosted 2.2 million Palestinian refugees in 2015, while the total population of the kingdom, according to preliminary results of the official census of the same year, stood at 9.5 million people, of whom only 6.6 million are Jordanian.

In case a confederation was established with the Palestinians, the kingdom may feel threatened, fearing that it would be turned with time into a Palestinian state given that the majority of its population would be Palestinian nationals, according to a Jordanian study conducted in 2014 by Mahmoud al-Jundi, titled “The Problem of Palestinian-Jordanian Confederation: A Reading in Fears and Repercussions.”

Azzam Huneidi, the former head of Jordan's Muslim Brotherhood parliamentary bloc, told Al-Monitor, “The confederation option with our Palestinian brothers is unacceptable because this means that the Palestinian cause would be forwarded to Jordan and would give Israel a comfortable solution allowing it to maintain its settlement expansions and control the entire Palestinian territory. We believe the only proper solution to the Palestinian cause is to grant Palestinians their own state on their national soil.”

The Palestinian enthusiasm and increasing support for the option of confederation with Jordan raises suspicion, perhaps because the Palestinians have lost all hope to establish an independent state and no longer have confidence in the PA, in light of its successive political failures with Israel. The Palestinians see in Jordan a gate to the world in light of the siege imposed on them by Israel and the restrictions on their movement from and to their own country.