Why confederation with Palestine is suddenly a hot issue in Amman

Discussion of a possible Palestinian-Jordanian confederation is testing the public mood in Jordan and the West Bank as President Mahmoud Abbas' popularity dips further. 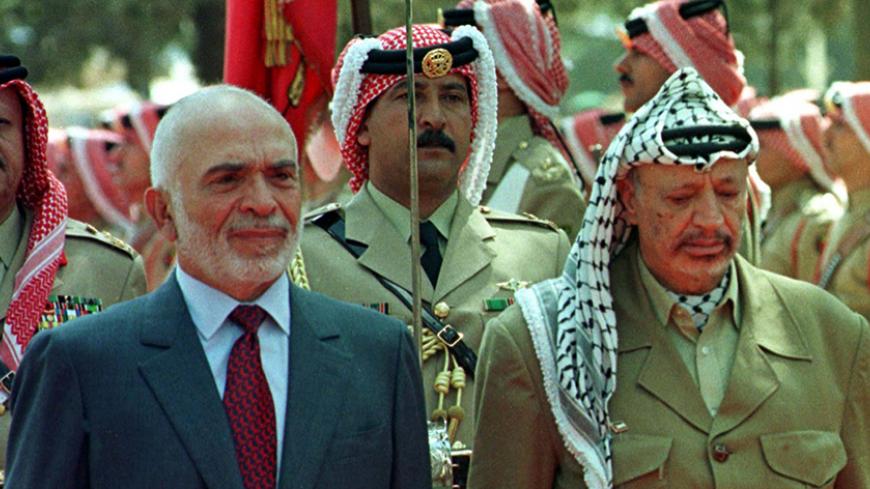 It’s been decades since the issue of confederation between the Kingdom of Jordan and Palestine was a matter of public debate. The idea gained traction in the mid-1980s and early 1990s as the rift between Jordan and the Palestine Liberation Organization narrowed and King Hussein and Yasser Arafat appeared to reconcile their differences. In principle, the two leaders agreed that once the state of Palestine is born, it will choose to join Jordan in a confederation between two sovereign states.

But the Oslo process, leading to direct secret negotiations between the PLO and Israel that resulted in the signing of a "declaration of principles" on the White House lawn in 1993, put the idea on hold. Jordan went on to sign its own peace deal with Israel in 1994, and the Palestinians were caught in endless and often fruitless negotiations with Israel under US auspices. That process took a nosedive following the second Palestinian intifada in 2000 and the death of Arafat in 2004.

Under King Abdullah and Palestinian leader Mahmoud Abbas, the subject of confederation rarely if ever surfaced publicly. Jordan supported the two-state solution and underlined its historical custodianship of Muslim and Christian holy places in Jerusalem, a subject that often marred relations between Abdullah and Abbas.

So it was surprising that former Jordanian Prime Minister Abdelsalam al-Majali, who negotiated the peace deal with Israel in the 1990s, announced from Nablus May 22 that he personally believes that confederation between an independent Palestine and Jordan is the best option for both people.

He was quoted by a Palestinian news agency as declaring before 100 Nablus notables that Israeli Prime Minister Benjamin Netanyahu had repeatedly called on Jordan to adopt the confederation option with the Palestinians immediately, and that Jordan had rejected the idea. For Majali, confederation means “a joint legislature and a joint government with equal representation whereby the upper authority will have three main missions — security, economy and foreign affairs — and the rest will be the jurisdiction of the joint government.” He also said, “In a confederation, centralization will have to end and the people will have the ultimate choice of how to govern themselves.”

Majali’s statements found mixed reactions in Amman. While there has been no official comment from the government, political commentators rushed to warn that the timing of such statements should raise many questions. The online newspaper Raialyoum reported May 22 that prominent Palestinian figures are preparing to dispatch a delegation of 350 notables to the Jordanian capital to call on Abdullah to intervene “to protect the West Bank and reactivate the confederation project.” It also noted that the majority of West Bank Palestinians now support confederation between an independent Palestinian state and Jordan.

An-Najah University in the West Bank published the results of an opinion poll on May 13 that found that 42.3% of Palestinians support the confederation project while 39.3% oppose it.

No such figures are available for the Jordanian public. But Majali’s statements received little support from Jordanian commentators. Former Information Minister Samih al-Ma’aytah told Al-Monitor, “Federalism or confederalism is not an option for Jordanians in dealing with the Palestinian question. It is a Zionist scheme aimed at burying Palestinian rights.” He added, “All Jordanians reject this without exception. It is a way for Israel to make Jordan pay for the cost of its occupation while denying Palestinians any right to rule over themselves on their land.”

Political columnist Fahd Al-Khitan warned in his May 23 column for Al-Ghad, “The failure of Palestinian-Israeli negotiations should not come at the expense of Jordan.” He argued that such a solution entails “annexing the Palestinian people to Jordan without their land.” He added that such a choice would be tantamount to “the Jordanian state committing suicide.” Khitan noted that some parties, which he did not name, were trying to take advantage of the distressed relations between Jordan and the Palestinian Authority.

His conclusion is based on a number of reports that relations between Abdullah and Abbas are frigid and distant. Differences between the two men include Abbas’ strategy in seeking UN Security Council recognition of Palestinian statehood to Jordan’s historic role in Jerusalem. Notably, Abdullah’s May 25 speech marking the 70th independence anniversary of the kingdom failed to mention the customary support for the two-state solution. Instead the king underlined the historic Hashemite sacrifices in Palestine, Jerusalem and Al-Aqsa Mosque, adding that the Jordanians “still fulfill their responsibilities and duties toward the holy sites of Jerusalem.”

The Jordanian government did not comment on a May 27 report in the Middle East Eye that read, “The United Arab Emirates, Egypt and Jordan are planning for a post-Mahmoud Abbas era that would leave his Fatah archrival Mohammed Dahlan in control of the Palestinian presidency, the Palestinian Liberation Organization and the Palestinian Authority.” Author David Hearst wrote that senior Jordanian and Palestinian sources had spoken of the plan separately.

Abbas, who met with Majali during his visit to the West Bank, did not comment on the issue of confederation. But the London-based Al-Quds Al-Arabi reported May 26 that Palestinian notables in Jordan and Hebron had begun collecting hundreds of signatures for a petition that rejects any solution “that could serve the Israeli enemy.”

The resurfacing of the confederation issue could be seen as a litmus test of the public mood in Jordan and the West Bank amid tense relations between Amman and Ramallah and in light of President Abbas' dipping popularity among Palestinians. One critic of the confederation idea, political commentator Labib Kamhawi, told Al-Monitor that it is also likely that “Abbas is complicit in this scheme with Jordan and Israel to pass a settlement that would make Jordan the PA’s heir following his dismal failure.” He added that under this scheme, “Jordan would take over security duties from the PA and would rule over Palestinians in the West Bank but without the land. This will effectively close the Palestinian issue for good.”